After dropping more than 11% in June with only a modest bounce in July, the Canadian Cannabis LP Index continued to struggle in August, losing 6.7% to 266.31: 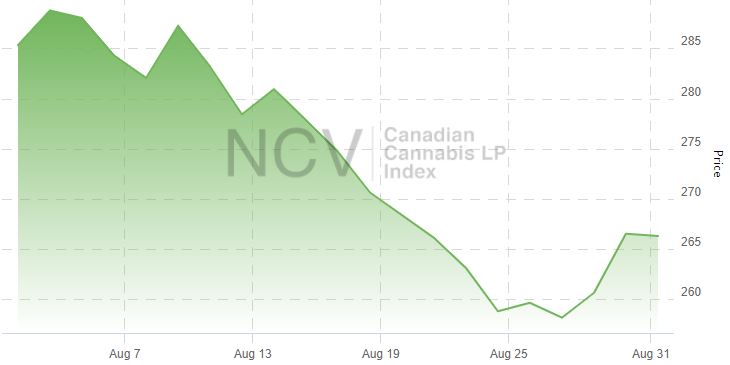 Among these largest LPs by revenue, HEXO was the best performer, rising 3.3%.  Canopy Growth declined 12.1%, with Aurora Cannabis dropping 5.6% and Aphria decreasing 0.5%.

The returns for the overall sector varied greatly, with 2 names gaining more than 10%, while 3 declined by more than 20%, with the entire group posting a median return of -7.9%: 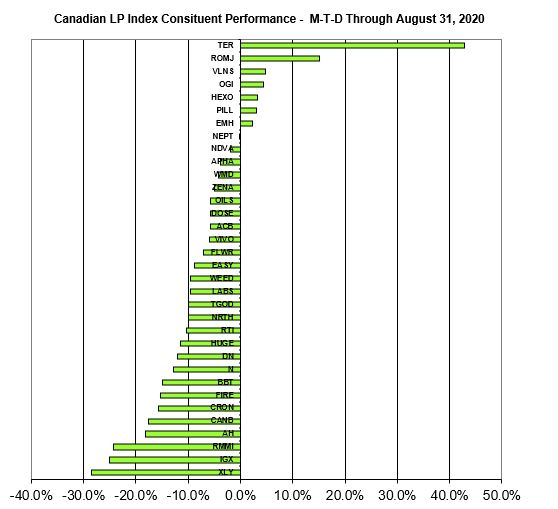 For September, the overall index will have 31 constituents, with the removal of 48North, Benchmark Botanicals, CanadaBis Capital and FSD Pharma, which no longer meet the rules, and the inclusion of Adastra Labs (CSE: XTRX). With its recent quarterly revenue from Canada exceeding C$5 million, TerrAscend (CSE: TER) (OTC: TRSSF) will move from Tier 3 to Tier 2 .

In the next monthly review, we will summarize the performance for September and discuss any additions or deletions. Be sure to bookmark the pages to stay current on LP stock price movements within the day or from day-to-day.