The Public Cannabis Company Revenue & Income Tracker, managed by New Cannabis Ventures, ranks the top revenue producing cannabis stocks that generate industry sales of more than US$12.5 million per quarter (C$15.7 million). This data-driven, fact-based tracker will continually update based on new financial filings so that readers can stay up to date. Companies must file with the SEC or SEDAR and be current to be considered for inclusion. Please note that we have raised the minimum quarterly revenue several times as the industry has scaled up, including from US$10.0 million in November 2020, US$7.5 million in June 2020, US$5.0 million in October 2019 and US$2.5 million in May 2019.

41 companies currently qualify for inclusion, with 29 filing in U.S. dollars and 12 in the Canadian currency, which is up by 3 from our update a few weeks ago. Joining the list were 4Front Ventures (CSE: FFNT) (TSX: FFNTF), Alcanna (TSX: CLIQ) (OTC: LQSIF) and Hydrofarm (NASDAQ: HYFM). 4Front transitioned to U.S. GAAP accounting, which allowed a higher level of revenue to be recognized that resulted in its Q3 revenue qualifying for inclusion.

Extending upon the solid results of several peers that reported earlier in March, the companies reporting over the balance of the month generally met or exceeded expectations.  Trulieve (CSE: TRUL) (OTC: TCNNF), which had been expected to expand revenue 19% sequentially, reported 28% growth. Cresco Labs (CSE: CL) (OTC: CRLBF), which had been expected to generate 5% sequential growth, expanded it by 6%. Harvest Health and Recreation (CSE: HARV) (OTC: HRVSF) beat expectations of 8% sequential growth, delivering an increase of 13%.  GrowGeneration (NASDAQ: GRWG) beat its own pre-announced level slightly and raised its 2021 outlook dramatically, with the company now projecting sales of $415-430 million.  Greenlane (NASDAQ: GNLN) revenue was in line with expectations, while Charlotte’s Web (TSX: CWEB) (OTC: CWBHF) was slightly lower than expected with adjusted EBITDA slightly better than expected. 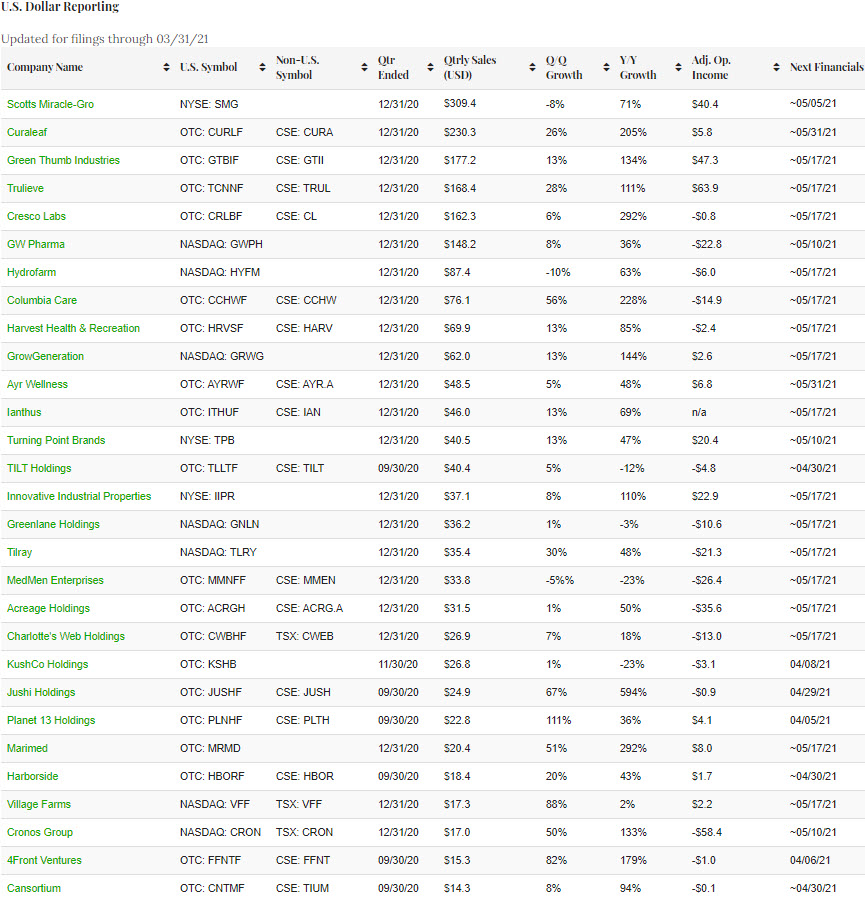 In the back part of March, Alcanna, TerrAscend (CSE: TER) (OTC: TRSSF), High Tide (TSXV: HITI) (OTC: HITIF) and Zenabis (TSX: ZENA) (OTC: ZBISF) reported financials. TerrAscend, which will be moving to U.S. GAAP accounting and filing with the SEC in American dollars going forward, had pre-announced its revenue, which grew 28% sequentially to C$65 million, and adjusted EBITDA, which grew 46% sequentially to C$26 million, producing a margin of 40% . High Tide fiscal Q1 results, which included a full contribution from the recently acquired META Growth, expanded 54% sequentially, with the company reporting an adjusted EBITDA of $4.6 million. Alcanna’s Q4 cannabis revenue grew 8% sequentially, with the operating segment breaking even. During March, the company spun out its cannabis operations, and we will be reporting its results. Due to the timing of the close of the merger, the company will likely not qualify for inclusion following Q1. Zenabis barely managed to stay on the list as it saw sales slip 16% sequentially. 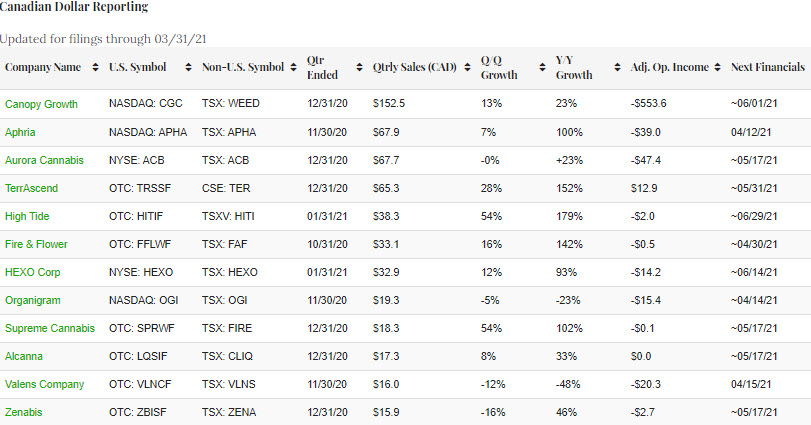 For those interested in more information about companies reporting in April, we publish comprehensive earnings previews for subscribers at 420 Investor, including for Focus List members Aphria, Fire & Flower, Flower One, Harborside, KushCo Holdings, Organigram and Planet 13 Holdings.