The Public Cannabis Company Revenue & Income Tracker, managed by New Cannabis Ventures, ranks the top revenue producing cannabis stocks that generate industry sales of more than US$7.5 million per quarter (C$9.9 million). This data-driven, fact-based tracker will continually update based on new financial filings so that readers can stay up to date. Companies must file with the SEC or SEDAR to be considered for inclusion. Please note that we raised the minimum quarterly revenue in May from US$2.5 million and from US$5.0 million in October.

45 companies currently qualify for inclusion, with 29 filing in U.S dollars and 16 in the Canadian currency, which is the same as when we reported at the end of January. Supreme Cannabis (TSX: FIRE) (OTC: SPRWF) fell off due its fiscal Q2 revenue declining to below the minimum, while High Tide (CSE: HITI) (OTC: HITIF) joined the group for the first time.

For companies that report in U.S. dollars, Acreage Holdings (CSE: ACRG) (OTC: ACRGF), AYR Strategies (CSE: AYR) (OTC: AYRSF), cbdMD (NYSE American: YCBD), Green Growth Brands (CSE: GGB) (OTC: GGBXF), GW Pharma (NASDAQ: GWPH), Innovative Industrial Properties (NYSE: IIPR) and MedMen Enterprises (CSE: MMEN) (OTC: MMNFF) provided updated financials during March. The theme appeared to be growing revenue but expanding operating losses, though there were exceptions. Acreage Holdings reported a sequential decline in revenue in Q4 and experienced a substantially higher operating loss that exceeded $67 million. The company attributed the decline to a “an opportunistic wholesale transaction in Massachusetts during third quarter, which did not repeat in the fourth quarter.” It also cited regulatory delays in opening new stores. AYR Strategies saw Q4 revenue grow 1% sequentially as its operating loss expanded, and it provided guidance for 2020 that it expects to achieve revenue in excess of $207 million with adjusted EBITDA greater than $93 million. cbdMD grew revenue by 6% sequentially in fiscal Q1 but also saw its operating loss expand. Green Growth Brands fiscal Q2 revenue grew 12% sequentially, but the operating loss didn’t improve despite a better gross margin. The company will be selling 80% of its CBD business, which accounted for half the revenue. GW Pharma remained at the top of the list as its Q4 revenue of $109 million was slightly higher than the $108 million noted in its pre-announcement. Despite the 21% advance in revenue from Q3, the operating loss expanded by 14%. Cannabis REIT Innovative Industrial Properties posted a very strong report for its Q4, with revenue expanding 53% sequentially as its operating income grew 56%. Finally, while MedMen’s fiscal Q2 revenue grew 11% from Q1, the operating loss expanded 46% despite a reduction in corporate SG&A due, in part, to an accounting adjustment to its cost of goods sold. 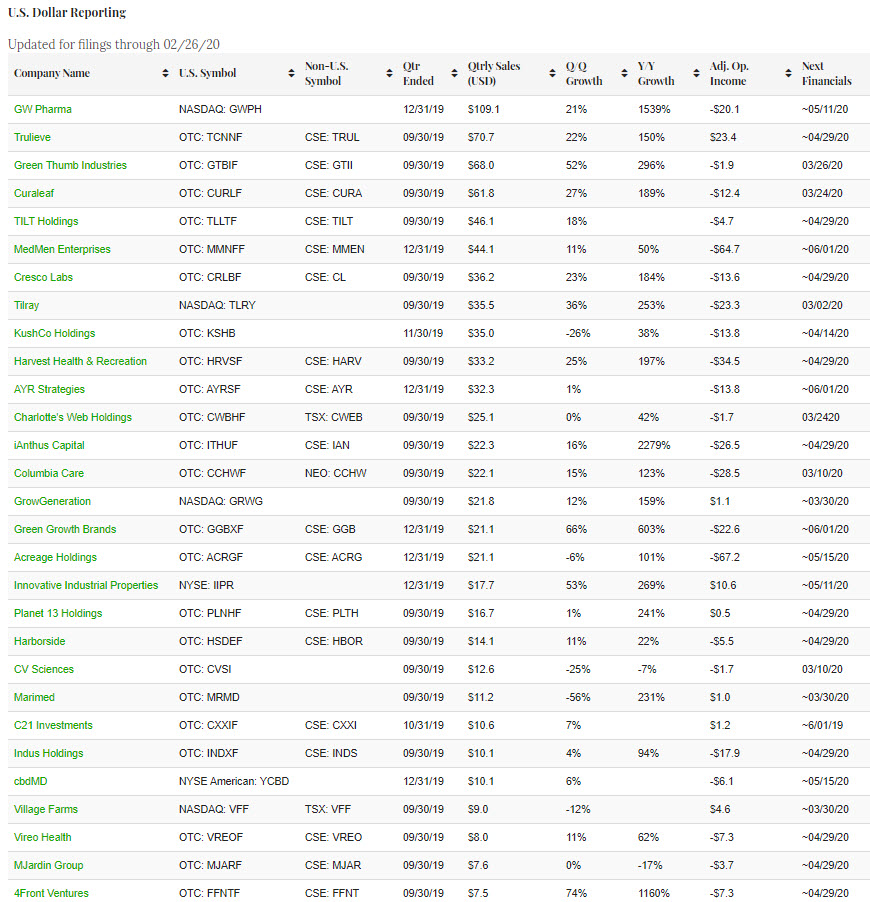 During March, we expect reports from a substantial number of companies, including Charlotte’s Web (TSX: CWEB) (OTC: CWBHF), Columbia Care (NEO: CCHW) (OTC: CCHWF), Curaleaf Holdings (CSE: CURA) (OTC: CURLF), CV Sciences (OTC: CVSI), Green Thumb Industries (CSE: GTII) (OTC: GTBIF), GrowGeneration (NASDAQ: GRWG), Marimed (OTC: MRMD), Tilray (NASDAQ: TLRY) and Village Farms (TSX: VFF) (NASDAQ: VFF). Several other companies that are listed on the CSE with fiscal years ending in December could report as well, though their filings aren’t due until late April. Tilray is scheduled to report Q4 after the close on March 2nd, with analysts, according to Sentieo, expecting revenue to rise 9% from Q3 to $55.7 million. In Q4, the company’s cannabis revenue from adult-use and medical markets totaled $35.5 million, with the balance from its Manitoba Harvest unit acquired a year ago. GrowGeneration hasn’t yet announced its Q4 earnings release date, but it is likely in the second week of March. The company pre-announced revenue of $26 million and has provided soft guidance for revenue to reach $130 million, and it subsequently announced an acquisition that with annual sales of $12 million. Charlotte’s Web will report on March 24th and is expected to have generated $27.6 million revenue in Q4, up 10% from Q3 and 29% from a year ago. Curaleaf will report its Q4 on the 24th as well. Analysts expect revenue to grow to $83.2 million, which could make it the top publicly traded MSO, depending on the results of its peers. At the consensus, Curaleaf growth would be 35% above Q3 results and 160% above year-ago levels. Analysts expect the company to company to approach break-even on operating profits and to report positive adjusted EBITDA. Finally, GTI has scheduled a conference call for March 26th. The company’s Q4 is expected to have generated $76 million of revenue, which would represent growth of 12% from Q3 and 278% from a year ago. Analysts expect the company to report a small operating profit. 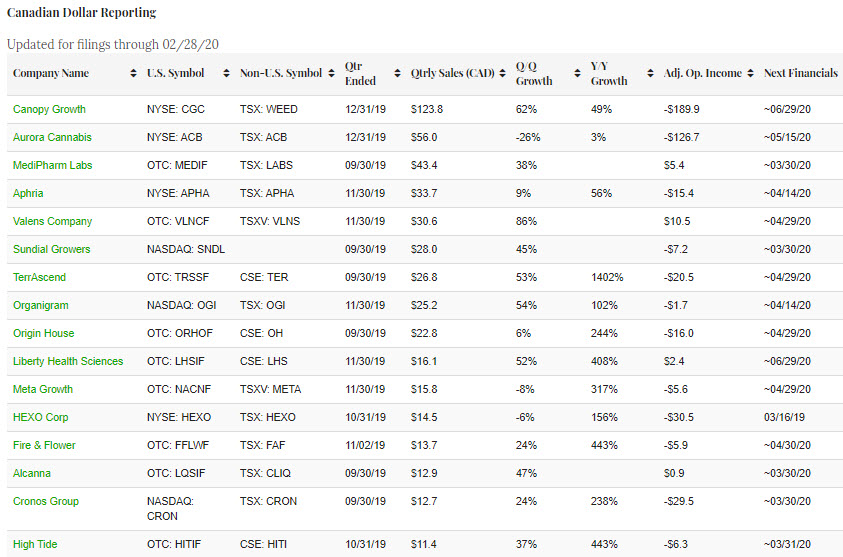 During March, we expect financial updates from LPs Medipharm Labs (TSX: LABS) (OTC: MEDIF), Sundial Growers (NASDAQ: SNDL), Cronos Group (TSX: CRON) (NASDAQ: CRON) and HEXO Corp (TSX: HEXO) (NYSE: HEXO) and retailers Alcanna (TSX: CLIQ) (OTC: LQSIF) and High Tide. MediPharm Labs, which could announce an uplisting to the NASDAQ, is expected to see Q4 revenue decline slightly, according to Sentieo’s analyst consensus, which is at C$42.3 million. The company began generating revenue in 2019. Sundial Growers is also expected to have experienced a slight decline in Q4 revenue from C$33.5 to C$33.2 million. The company generated $28 million from its cannabis operations in Q3, with the balance from ornamental flowers. Cronos Group had previously scheduled its call for late February but delayed for unstated reasons. As an accelerated filer, it is required to file by March 2nd but can take an extension of 15 days. The company is expected to have generated C$15.7 million during Q4, which would represent 24% sequential growth. HEXO Corp is expected to have generated C$16.9 million revenue in its fiscal Q2, which would represent sequential growth of 16% and annual growth of 25%.