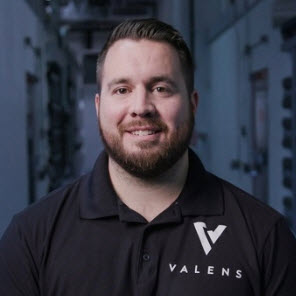 Valens GroWorks (TSXV: VGW) (OTC: VGWCF) is setting itself apart from other cannabis processors by offering a diverse range of extraction methods, rather than a single option. CEO and Director Tyler Robson spoke with New Cannabis Ventures about this differentiated approach, his company’s business divisions and industry partnerships. The audio of the entire conversation is available at the end of this written summary.

Robson’s interest in the cannabis industry began when he saw the chance to change the negative stigma surrounding it. He and the Valens GroWorks team are focused on creating a credible presence in the cannabis business.

Robson is joined by several key individuals on the leadership team, including COO Chantel Popoff, CFO Chris Buysen, and Head of Production and Product Innovation Quinn Shiskin. Popoff and Buysen both have experience in the pharmaceutical industry, while Shiskin helps drive the company’s focus on the cannabis plant and extracts.

Valens GroWorks has three core business divisions. Valens Agritech is the company’s licensed processing facility. Through this sector of its business, the company does multiple types of extraction, product development, distribution, B2B sales, and sales to the provinces. Valens GroWorks develops a wide range of products, including soft gels, edibles, beverages, and concentrates.

Valens Labs is the company’s testing laboratory. Multibillion-dollar company Thermo Fisher named it the Center of Excellence for Plant-Based Science. The lab tests products through every stage of development (during extraction, post-extraction, and during the formulation process) to ensure product consistency, according to Robson.

SōRSE Technology is a water-compatible product that facilitates rapid onset (10 to 15 minutes) and off-set (45 to 60 minutes) of cannabis effects.

Valens GroWorks has 27,000 square feet of licensed space and a projected 425 tons of capacity. The company is currently building out an additional 56,000 square feet on the property adjacent to its British Columbia footprint.

Right now, Valens GroWorks serves only the domestic Canadian market. The company is aiming to replicate the footprint it has created in British Columbia and take it global. Potential for expansion includes the east coast of Canada, Europe (particularly the U.K., Germany, and Denmark), South America (Uruguay and Colombia), and Australia. As the company grows, it will be pursuing additional processing and distribution licenses.

Valens GroWorks does custom manufacturing for its customers. The company serves a number of licensed producers, including Tilray, Canopy Growth, Hexo, Organigram, and Sundial. It is also serving customers that are entering the cannabis sector from other markets. For example, Valens GroWorks has agreements with Shoppers Drug Mart and Iconic Brewing.

When vetting potential partnerships, the Valens GroWorks team has a comprehensive due diligence process that takes into consideration market size, capacity, and demand.

CO2 extraction is a straightforward process involving a single solvent. On the other hand, hydrocarbon extraction uses pentane, butane, propane, or hexane, which allows for a greater variety of formulations and products, according to Robson. Valens GroWorks is the only third-party company offering hydrocarbon extraction, he says.

In the early days of the company, its founders put their own money into the company. The company has also done a series of equity raises. To-date, Valens GroWorks has raised just under $100 million, according to Robson. AltaCorp Capital has been the company’s top fundraising partner.

The company has approximately $65 million in cash right now. Valens GroWorks is fully funded and focused on executing, according to Robson. The company is cash-flow positive. It reported $5.9 million in net income for Q3, and that number is expected to grow quarter over quarter. Robson anticipates that the company will be self-sufficient moving forward.

When it comes to tracking companies in the cannabis space, Robson suggests investors look at EBITDA and income. “Revenue is fairly easy to generate, but who is making good margins? Who is making money?” he says.

Cannabis processors need the technology and a strong cannabis culture with people who understand the chemistry of extraction, according to Robson.

As Cannabis 2.0 rolls out, Robson foresees a major opportunity for Valens GroWorks. Licensing and provincial retail may be a challenge, but he expects that to change over the next six months to a year. The increased variety of products that will come with Cannabis 2.0 will help shift many consumers from the black market to the legal framework. And, Valens GroWorks is in a strong position to bring those new products to market with its partners and, potentially, to launch its own brand.

To learn more, visit the Valens GroWorks website. Listen to the entire interview: