With Tilray’s shareholders finally approving the merger with Aphria, one of the largest global cannabis companies by market cap has been created. When the deal was announced last year, the companies called it the “largest global cannabis company by revenue” and shared what we view as a highly misleading graphic comparing the combined company’s trailing revenue of $874 million, 4% above Curaleaf, to peers. 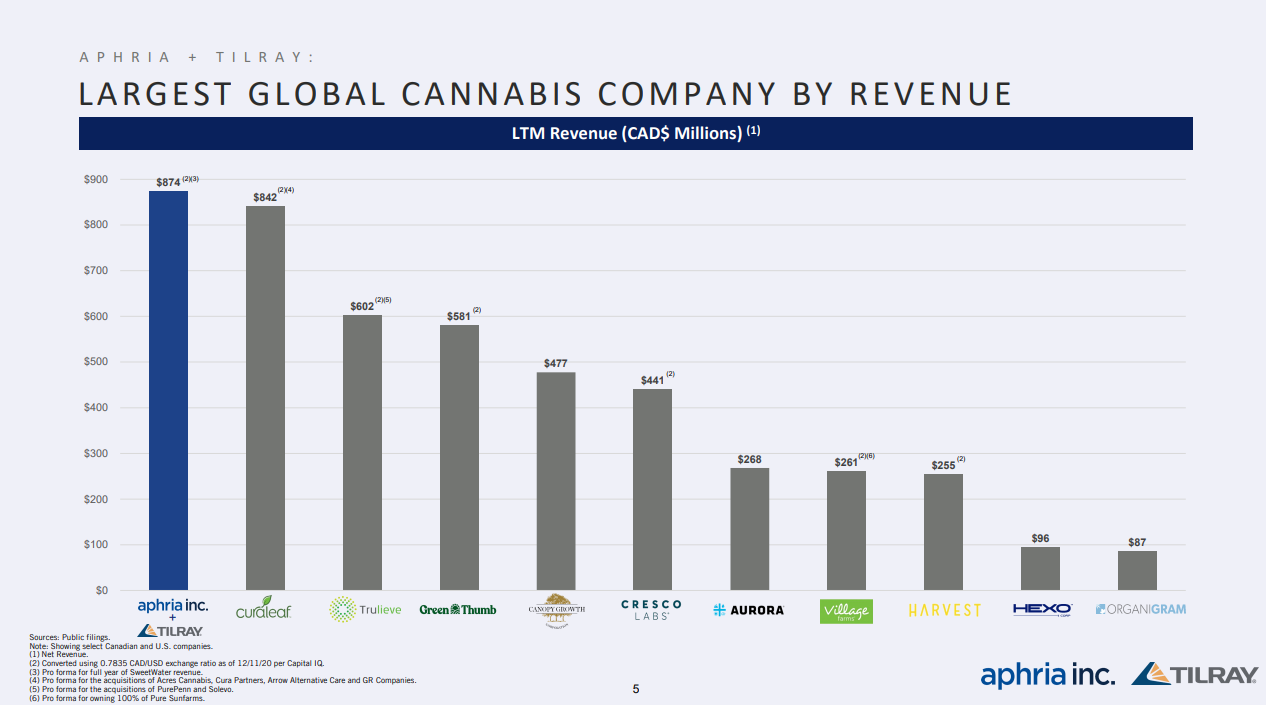 The pro forma $874 million number included not only the cannabis revenue of the two companies, but also a substantial amount of non-cannabis revenue. In its most recent quarter ending 2/28, cannabis-related revenue was C$51.7 million at Aphria, or just 34% of overall sales. Its pharmaceutical distribution represented almost 57%, while the remaining almost 10% was from its recently acquired craft beer business. Similarly, for its Q4 ending 12/31, Tilray’s $56.6 million included $15.3 million from hemp food, or 27% of overall sales. For the full year, hemp food sales represented over 36% of revenue. The combined company’s non-cannabis sales are the majority of overall revenue. The combined company’s cannabis revenue would be in the middle of the peer group.

Tilray and Aphria certainly aren’t alone in generating substantial non-cannabis revenue, and we wouldn’t be surprised to see more companies pursue broader growth strategies. Canopy Growth, for example, has substantial ancillary revenue as well as non-cannabis revenue. Investors not understanding the sources of revenues and profits for a company can make a big mistake. For example, looking at the total revenue of the combined Aphria and Tilray and comparing it to the revenue of Curaleaf, given its slightly higher market cap, might lead one to conclude that the combined company is cheaper on this basis.

Valuing companies that own disparate businesses can be a challenge. In the case of Aphria, for example, the pharmaceutical distribution revenue has been the largest part of the overall revenue. It has extremely low EBITDA margins and has not grown since the acquisition. It’s pretty clear that this revenue is substantially less valuable than the cannabis revenue. The same can be said for Tilray’s hemp food business.

When companies like Tilray and Aphria own disparate businesses, it makes sense to use sum-of-the-parts analysis to value the overall company. Because the companies are offering segment results that include both revenue and segment profit, the process is pretty straight-forward. Rather than looking at the overall revenue or EBITDA of the company, one can look at each segment and value it separately. The total valuation would be the sum of the operating segments.

A great example of the usefulness of this type of analysis is Scotts Miracle-Gro, which is the largest cannabis revenue company that we track in the New Cannabis Ventures Public Cannabis Company Revenue & Income Tracker, where we include only its Hawthorne Gardening revenue and operating income. The company derives the majority of its revenue from its lawn and garden business, which we exclude from our rankings. One can look at the overall PE ratio or any other form of valuation, but we think it makes more sense to break the company into two to assess its valuation. The cannabis business is quite comparable to Hydrofarm, and one can use the metrics of that pure-play to help form one’s opinion about what the Hawthorne business is worth. This can be subtracted from the overall company’s valuation to then assess the lawn and garden business.

Investors using sum-of-the-parts analysis can sometimes find attractive valuations in complex businesses. Take, for example, Alcanna, the Canadian retailer that had both alcohol and cannabis operations, with no real synergy between them. The company didn’t believe it was being valued properly and decided to spin out its cannabis operations. It was able to raise substantial capital for the spin-out, Nova Cannabis, which has a very different growth profile from the core business. While Nova Cannabis has actually declined rather substantially since the deal was finalized, Alcanna’s stock has actually increased.

Another interesting example of a potentially challenging valuation exercise is TILT Holdings, which is both an ancillary company as well as a direct cannabis operator. These types of businesses attract different investors and have different valuations, so it makes sense to take the time to value them separately and then combine the two valuations to form an overall assessment.

Many investors take short-cuts and look at the overall company valuation metrics even when its businesses can be quite different from one another. We think that using sum-of-the-parts analysis can help investors both avoid mistakes, like overpaying for unprofitable or slow-growing revenue, as well as find perhaps hidden value.

Access FDIC-insured banking services for cannabis-related businesses with Dama Financial, a client of New Cannabis Ventures and a sponsor of this week’s newsletter. Dama’s robust risk and compliance system meets legal and regulatory anti-money laundering guidelines. The company was founded in 2016 by entrepreneurs and veterans from the banking and payments industry.

Learn how Dama Financial can help your cannabis business by visiting their page that we maintain on their behalf. Click the green Get More Info button to be contacted by a representative of the company.