The weakening growth trends in May that we discussed last month continued in June, according to cannabis data analytics firm BDSA. The comparisons to a year ago, when demand surged during the pandemic, have created challenges, with two states, Colorado and Oregon, seeing sales decline compared to then. Most of the markets saw a sequential decline, with some in excess of the 3.2% due to one less day in the month than in May. In this review, we will look at the markets one-by-one, beginning with the more mature Western markets and then concluding with the newer Eastern markets.

BDSA provides coverage for Arizona, California, Colorado, Nevada and Oregon. In April, growth ranged from -3%% in Colorado to 29% in Arizona compared to a year ago.

Arizona transitioned to adult-use in late January, but this is the third month that BDSA included adult-use sales. Total cannabis sales grew 29% to $117.9 million, with adult-use representing $53.7 million, down slightly from May. Medical cannabis sales fell 30% to $64 million. Sequentially, overall growth fell 7.1%, with medical falling 4% and adult-use decreasing 0.4%. Growth was strong across all categories, but the highest growth by far was in pre-rolls, which gained 184%. 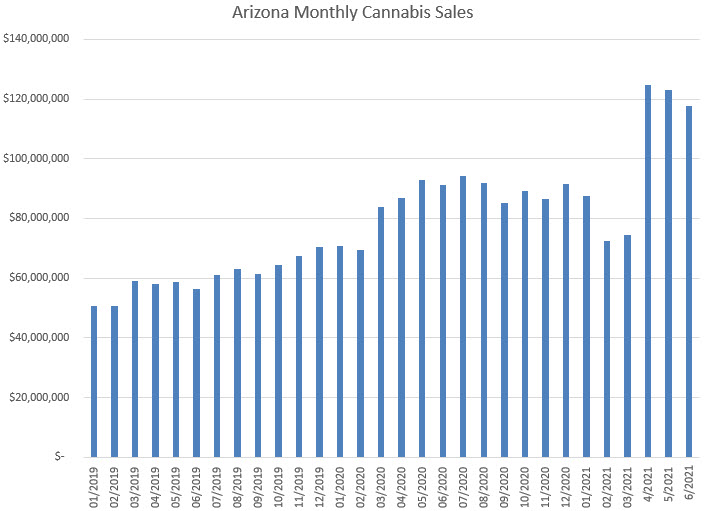 Annual sales grew 13.8% to $331.8 million, down 5% from June and 7% from the record level in April. Flower expanded 8%, with low double-digit growth for ingestibles and concentrates, while pre-rolls expanded by more than 50%. 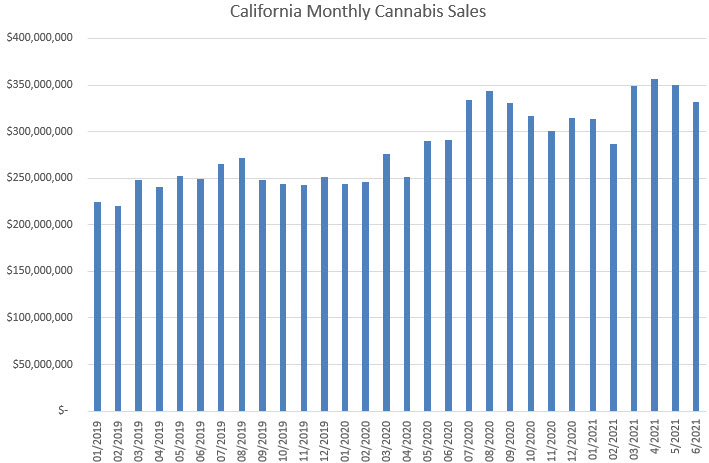 The mature market of Colorado, which has shown vigorous growth over the past year, declined 5% compared to a year ago. Last June, sales had grown 30.4%, so compared to two year ago, sales expanded 23.9% (11.3% compound growth). Sequentially, sales dropped 5.3% to $190.5 million. Flower declined 18%, while pre-rolls grew 26%. Ingestibles grew 7%, while concentrates expanded by 8%. 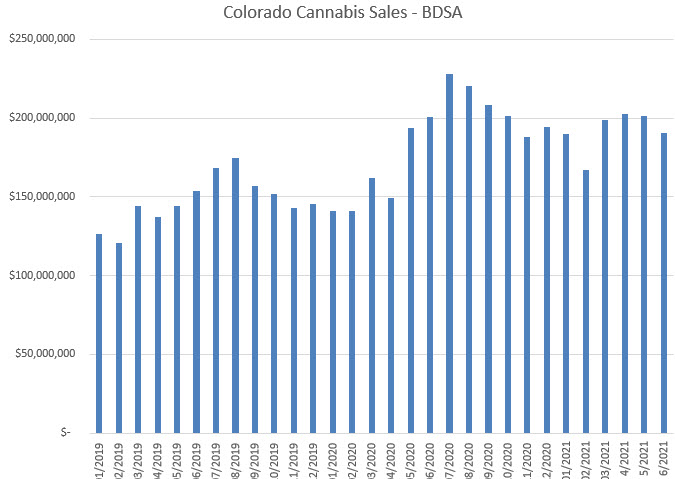 Given that Las Vegas fully reopened during June, the 8.8 sequential decline was disappointing. Compared to a year ago, sales expanded by 19.5% in June to $79.7 million. Edibles expanded 11%, with concentrates growing 15%, flower by 21% and pre-rolls by 27%. 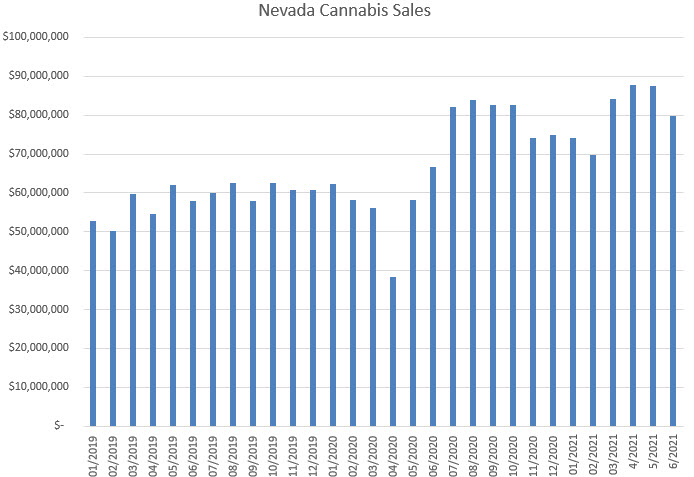 Oregon, another mature market that had explosive growth following the pandemic, declined year-over-year by 1%, with sales of $99.3 million falling 6% from May. Flower declined 5%, while pre-rolls grew 30%. Edibles fell by 28%, while concentrates grew 11%. 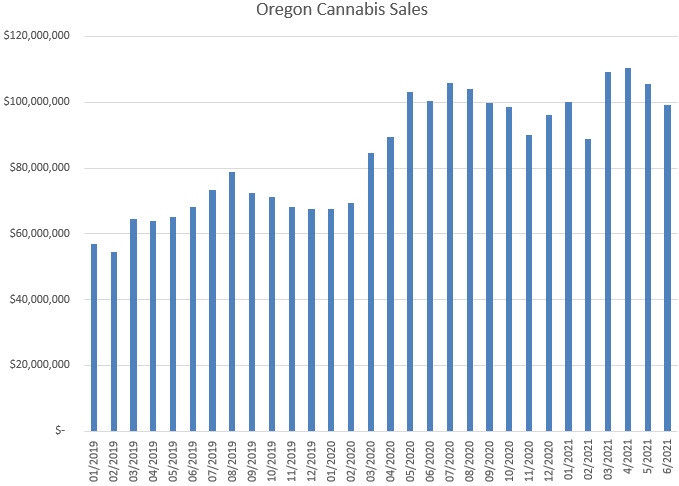 In the newer markets, the annual rate of growth continued to slow in all markets. Note that we wrote about June data for Illinois based on the state’s data a month ago. BDSA provides more comprehensive data than the state, breaking sales down by product types. The state reported very strong July adult-use sales, with growth of 110% to a record $127.8 million. Medical sales should be reported this coming week. Note that BDSA has begun providing data for Florida, Michigan and Pennsylvania as of January. Florida sales increased 3% sequentially to a record $155.7 million, while Pennsylvania’s fell for the second month in a row to $102.7 million. Michigan, which we previously detailed, saw overall sales flat at $149 million, up 65% from a year ago. BDSA includes accessories, which helped boost the sales in June to $151.7 million from $150.9 million in May.

Illinois combined adult-use and medical sales fell by 2% in June, including accessories, to $147.3 million, which was up 90.6% from a year ago. Flower led all categories, increasing 111%, with pre-rolls at 104%. Concentrates expanded 76%, while ingestibles grew 68%. 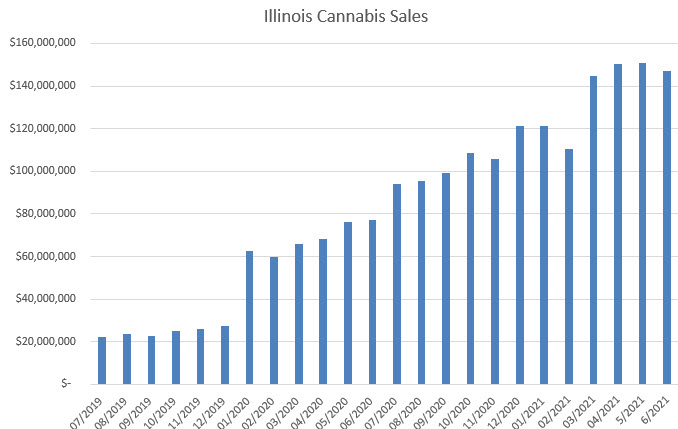 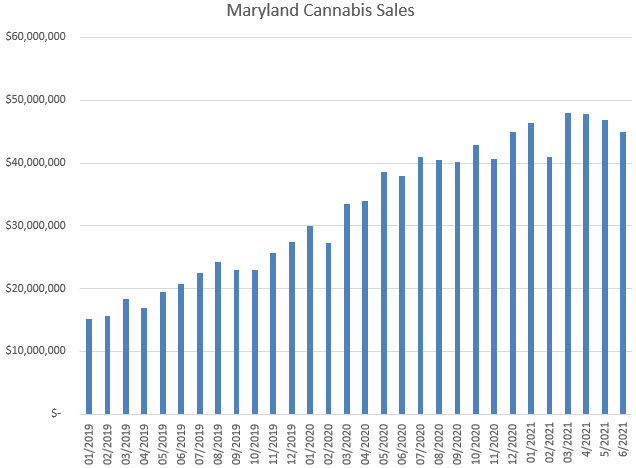 The growing store base helped Massachusetts to post solid numbers, with sales expanding 0.6% from May and 79% from a  year ago to $132.9 million. Flower expanded by 60%, while concentrates grew 74%. Ingestibles expanded 87%, and pre-rolls soared by 164%. This category represented 14.6% of overall sales. 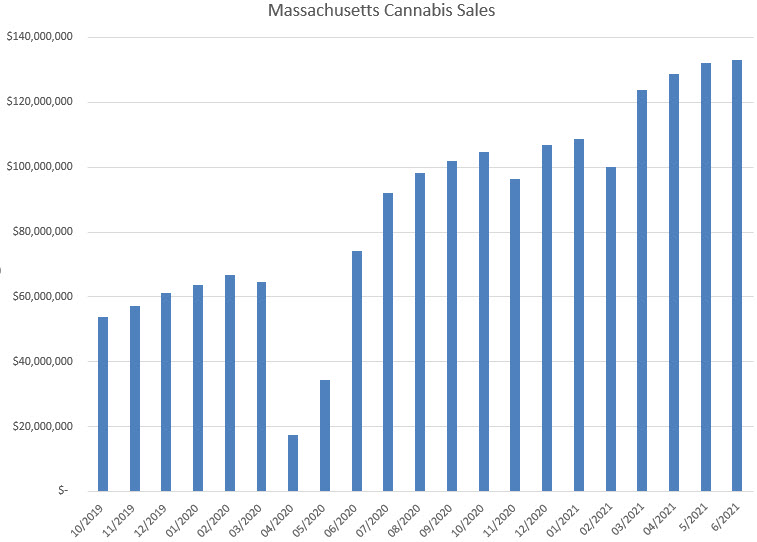