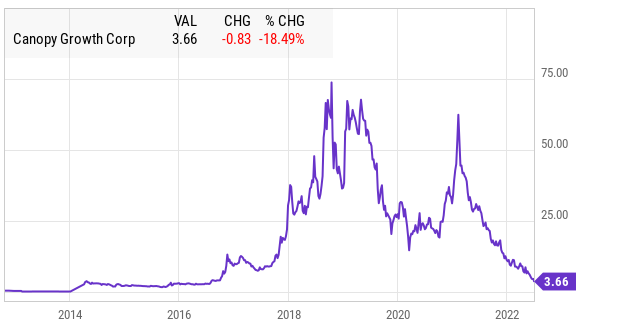 Canopy Growth Since Inception (in Canada)

We first highlighted the convertible debt as an upcoming challenge in late December, when the stock was near US$9.62. We followed up in February, calling out three companies that had too much debt at the time and might need to sell some stock. For Canopy Growth, we pointed out that as of their Q3, they moved from net cash to net debt. At the time, the stock was trading at about 2X tangible book value. The company waited until the stock fell a lot to improve its liquidity. At a price of US$2.50-3.50, the number of shares it will issue later this month is tremendous.

While we are more optimistic due to the pending resolution of the large convertible debt outstanding, we aren’t especially bullish on the name: There are no holdings of the name in our model portfolios at 420 Investor. The transactions to buy Wana Brands and Jetty Extracts give us great concern. There is a chance that the company could be out the purchase price and never able to actually close the deals. Canopy Growth has spent more than $366 million in cash and stock for the acquisitions of the majority of these companies and could ultimately face a write-down.

With the price down so much, we wanted to share the change in our perspective. While we aren’t really bullish on Canopy Growth relative to peers, we are no longer bearish on the price. At C$3.66, we get a market cap of roughly C$1.5 billion, based on the approximately 403 million shares outstanding. This is 1X tangible book value, half the level from early 2022. It’s important to realize that most of the potentially dilutive securities are far from their exercise prices. As of 3/31, the company had long-term debt of about $1.5 billion and cash and short-term investments totaling less than $1.4 billion. The current enterprise value, then, is roughly C$1.6 billion.

Taking into account what has been announced with respect to conversions of the convertible note (assuming US$3), the share-count will issue about 68 million shares, which, based on the current price, would boost the market cap to more than C$1.7 billion. We expect that given the cash burn will be less than fiscal 2022’s C$545.8 million, we project it will be about C$200 million. This would leave the enterprise value at about C$1.8-1.9 billion based on current prices. Recall that Constellation invested a lot more than that for a partial stake years ago.

Looking at fiscal 2024 projections, the analysts expect revenue could increase from about C$521 million in fiscal 2023, which isn’t that different from fiscal 2022’s C$520 million, to about C$698 million. The enterprise value is just 2.7X this amount. The company is projected to continue improving its loss of EBITDA, but the 2024 forecast is still -C$124 million.

At this point, the Canopy Growth stock price seems awfully low, but we don’t bet the stock is a great performer until it begins to generate a profit. One positive outcome would be for the beverage business to become much more lucrative. We think this will not only improve the numbers, but this development could get Constellation to take them out modestly higher. Also, the ability to close those U.S. acquisitions would likely boost the numbers and raise the interest in acquisition for Constellation Brands.

For those who have shorted Canopy Growth, this convertible debt conversion, with the VWAP over the next couple of weeks playing a big role, looks like a chance to flatten one’s position to us.

It’s the 4th of July weekend. We have been saying cannabis stocks could fly, and as prices are at all time lows, it could be a great time to give 420 Investor a try.

Cansortium is making steep inroads in the Florida market thanks to its CEO Robert Beasley. In an exclusive interview, Beasley, who prior to joining Cansortium was involved in legislative efforts to bring medical cannabis to Florida, said he expects the Sunshine State to become the largest cannabis state by revenue when adult-use launches, surpassing even California. Adult-use remains illegal in Florida. He also discussed Cansortium’s position in its four markets and how M&A could accelerate the company’s growth.

For the 16th month in a row, the Global Cannabis Stock Index has taken a hit. The June index saw the lowest close ever, plummeting 23.1% to 14.76. Last year, the index fell 26% and is down 55.1% thus far in 2022. For Q2, the drop was 47.8%. In the article we discuss the strongest performers as well as additions and removals. NCV also took a look at the performance of the American Cannabis Operator Index, Ancillary Cannabis Index and Canadian Cannabis LP Index, as well as Canadian Cannabis LP Index Tier 1, 2 and 3. New Cannabis Ventures maintains seven proprietary indices designed to help investors monitor the publicly-traded cannabis stocks.

Canopy Growth entered into privately negotiated exchange agreements with a limited number of noteholders to issue shares in exchange for $198 million of convertible debt, thus reducing a sizable portion of its convertible debt set to mature next year. In April, the company said it was undertaking a series of initiatives to reduce costs and drive efficiency to accelerate its path to profitability which included a “reduced headcount.”

Innovative Industrial Properties, Inc. entered into an amendment of its lease with Green Thumb Industries Inc. in Danville, Pennsylvania. The amendment provides $55 million in reimbursement to Green Thumb for the recently completed development of a 152,000-square-foot industrial building for cultivation and processing.

Akerna announced the sale of 29.4 million units and 14.1 million pre-funded warrants at a public offering price of $0.23 each. Proceeds are expected to be approximately $10 million. The offering is expected to close on or about July 5, 2022.

Ascend Wellness closed on $28.5 million of the remaining additional funding under the accordion feature of its existing term loan credit facility. This brings the total raised under the Senior Credit Facility to US$275 million. “The proceeds from this loan, together with our existing strong balance sheet, will support our near-term CapEx investments and acquisitions as we scale our footprint, said CFO Dan Neville.

Mike Tyson’s cannabis brand, Tyson 2.0, announced the close of its oversubscribed $9 million Series A round led by JW Asset Management. Additional investors include K2, Ambria Capital, Tress Capital, and Patrick Carroll. The funding will be used to acquire more celebrity intellectual property, scale marketing efforts, accelerate distribution, and further invest in the development of Tyson 2.0’s house of brands strategy. “Our model has shown early validation with robust sales and expansion of the brand to more than 20 states including several of the world’s leading operators, said Co-founder, President and Chairman, Chad Bronstein.