Publicly-traded CannLabs (OTC:  CANL), which operates what the company claims is the leading Colorado cannabis testing lab, continues to generate significant controversy.  Last week, it disclosed that its founder and President, Gen Murray, had been fired “for cause” and had resigned from the Board of Directors.  Earlier this week, New Cannabis Ventures uncovered an investigation by the Marijuana Enforcement Division that charged the company with 44 violations.

On October 6th, the company issued a press release that finally admitted that its former CEO, Mark Mirken, had returned to that role as well as assuming the role of Chairman of the Board.  The p.r. disclosed that the former Chairman, Mark Rogers, had left the Board of Directors as well, though the date of these management changes wasn’t disclosed. Mirken’s departure was never announced to shareholders except through a 10-Q filing with the SEC on July 8th:

His successor, Scott McPherson, who also held the role of CFO, left on July 16th, as disclosed in an 8-K filing with the SEC on July 22nd, with no successor named:

Gen Murray, who was still serving as President at that time, signed this SEC document.

The company filed a long overdue 8-K filing after the close of trading on October 7th that suggested Mirken had returned as CEO on August 7th, two days after the resignation of Chairman Mark Rogers but also the previously undisclosed departure of Director Kenneth Johnson: 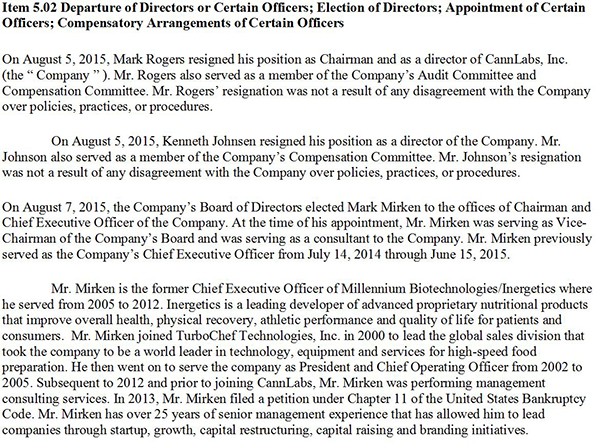 CannLabs has not only failed to keep its shareholders informed, but it appears to have violated the rules of the Securities & Exchange Commission, which require information of this nature to be disclosed within four business days.  The departures of the directors as well as the appointment of Mirken to CEO should have been revealed over 8 weeks ago.  Similarly, the termination of Gen Murray was disclosed outside of the proper time-frame.

The CannLabs saga appears to be a tragic tale of all that can go wrong with reverse-mergers, a speedy process to begin trading as a public company.  At this point, the company is delinquent in its filings, having still not filed financials for Q2, and it has failed to update its shareholders regarding several material events in a timely manner.

Cannabis Stocks Are On Fire: Don’t Get Burned