45 companies currently qualify for inclusion, with 37 filing in U.S. dollars and 8 in the Canadian currency, which is one more than when we reported a month ago. We added Flower One (CSE: FONE) (OTC: FLOOF), which reports in American dollars. Also, we have left Aphria in the Canadian section for now, but we will remove it when Tilray (NASDAQ: TLRY) reports its Q4. Additionally, we have left GW Pharma in the American dollar reporting section and will remove it or replace it with its acquirer, Jazz Pharmaceutical (NASDAQ: JAZZ), depending upon how they break out its financial performance.

Only Flower One reported during June, catching up on its delayed filings as it reported a revenue gain of 53% for Q1 compared to a year ago. 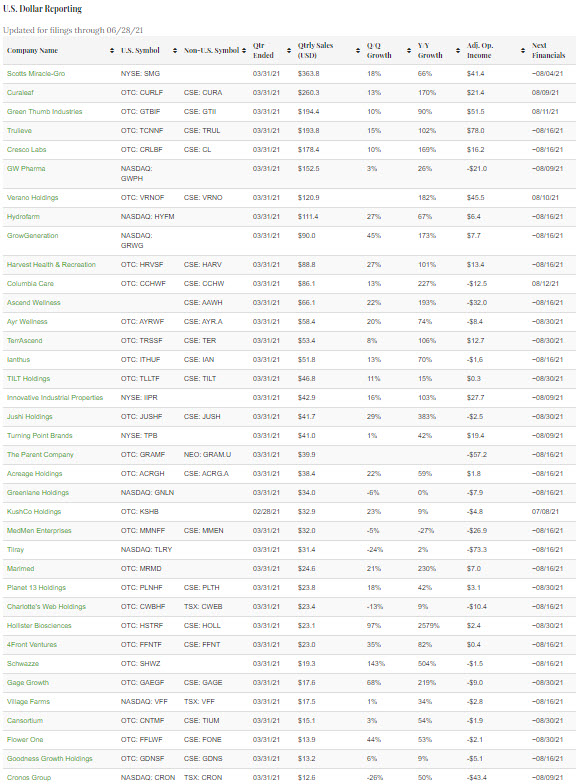 In July, KushCo Holdings (OTC: KSHB) will report its fiscal Q3 financials. The company pre-announced revenue at $27.5-28 million. According to Sentieo, analysts expect the company to report revenue of $27.86 million, with adjusted EBITDA of -$1.04 million. We expect that Tilray (TSX: TLRY) (NASDAQ: TLRY) could report its fiscal Q4 as well during July, though the deadline isn’t until August. This quarter will include a full quarter of legacy Aphria results with only a portion (28 days) of the legacy Tilray financials due to the timing of the close of the merger. Analysts expect revenue of $141 million, with adjusted EBITDA of $6 million. Note that the revenue includes a significant contribution from non-cannabis businesses.

Since we last provided an update, retailers Fire & Flower (TSX: FAF) (OTC: FFLWF) and High Tide (TSXV: HITI) (NASDAQ: HITI) reported strong growth, while LP HEXO Corp (TSX: HEXO) (NYSE: HEXO) missed estimates by a substantial margin. Fire & Flower and High Tide are both on the heels of Aurora Cannabis (TSX: ACB) (NASDAQ: ACB) for the #2 spot among those companies reporting in Canadian dollars. Both companies nearly doubled their revenue while generating relatively modest operating losses. HEXO Corp, on the other hand, saw revenue grow only 2% compared to a year ago as it slipped out of the Canadian Cannabis LP Tier 1 Index.

During July, Organigram (TSX: OGI) (NASDAQ: OGI) will report its fiscal Q3, and Valens Company (TSX: VLNS) (OTC: VLNCF) will report its fiscal Q2. Organigram is expected to see revenue increase only modestly from fiscal Q2, with the projected C$16.45 million representing a decline of 9% from a year ago. Analysts forecast adjusted EBITDA to have been -C$6.02 million. Valens is expected to have generated C$22 million in revenue, up 10% sequentially and 25% from a year ago, with adjusted EBITDA of -C$2.3 million.

For those interested in more information about companies reporting in June, we publish comprehensive earnings previews for subscribers at 420 Investor, including for Focus List members KushCo Holdings, Organigram and Tilray.