For the second consecutive month, Canadian cannabis producers moved modestly higher on average after a sharp decline in April, with the Canadian Cannabis LP Index increasing 0.9% to 875.23:

After rallying to begin the year, the index has now declined 12.9% thus far in 2018, with most of that coming in Q2, with the index declining 9.8% after the sharp April decline. Some of the most exciting developments in June were the passage of the Cannabis Act (C-45), which legalized cannabis for adult access, the large capital raises from Canopy Growth (TSX: WEED) (NYSE: CGC) and Aphria (TSX: APH) (OTC: APHQF) and the Aurora Cannabis (TSX: ACB) (OTC: ACBFF) secured credit facility with BMO, the Aurora Cannabis acquisition of Anandia Labs for C$115 million and the NASDAQ IPO filing for Tilray.

Tier 1, which includes the LPs that are generating sales of at least C$4 million per quarter, rallied 4.5% after a 15.5% gain in May and is now up 11.4% year-to-date. This group included Aphria, Aurora Cannabis, CannTrust (CSE: TRST) (OTC: CNTTF), Canopy Growth and MedReleaf (TSX: LEAF) (OTC: MEDFF). Within the group, Aurora, which lagged its peers in May, was the leader in June, rallying 14.4% compared to returns of -6.7% to 7.0% for the others.

Tier 2, which includes the remaining LPs that are permitted to generate sales, fell 0.6%, its fifth consecutive monthly decline, and is down 12.4% year-to-date. Green Organic Dutchman (TSX: TGOD) (OTC: TGODF) was the clear winner with its 14.3% gain, but several other companies were able to post positive returns. Emblem (TSXV: EMC) (OTC: EMMBF) and Newstrike (TSXV: HIP) (OTC: NWKRF) posted double-digit declines.

The returns for the overall sector varied greatly, with four stocks rising more than 10% while seven fell in excess of 10%: 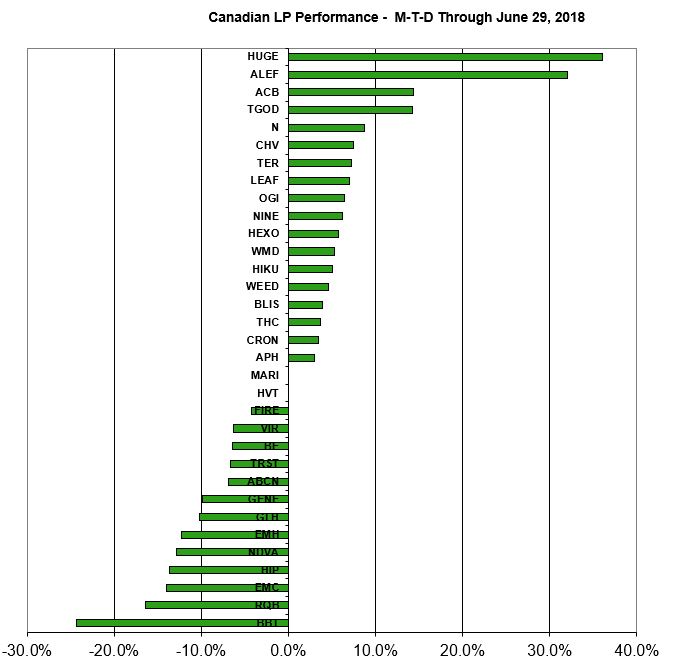