42 companies currently qualify for inclusion, with 29 filing in U.S dollars and 13 in the Canadian currency, which is down from 54 at the end of August due to the change in the qualifying standards. Since our last report in late August, there were just a few companies reporting, with no new additions. 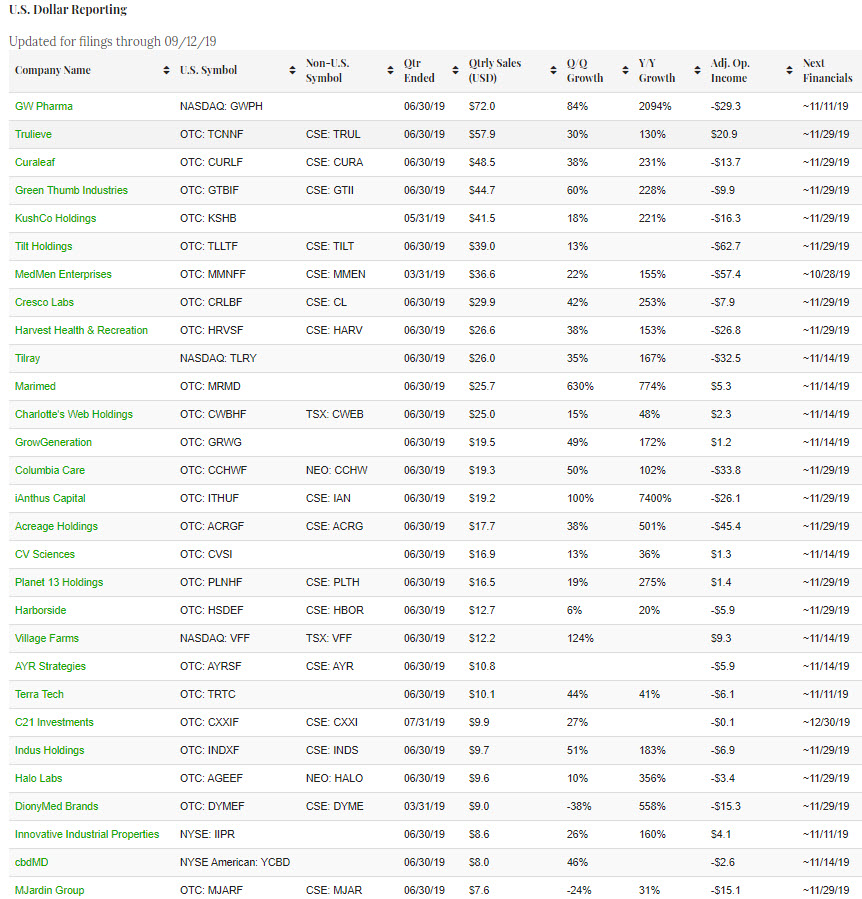 The only company expected to report in October is MedMen (CSE: MMEN) (OTC: MMNF), which has pre-announced revenue for its fiscal Q4 ending in June of $42 million. Investors will be looking for signs of spending control, as the company’s adjusted operating loss represented 157% of sales in Q3.

Of the companies that report in Canadian dollars, Aurora Cannabis (TSX: ACB) (NYSE: ACB) and Supreme Cannabis (TSX: FIRE) (OTC: SPRWF) reported their June fiscal year-end financials, while  Fire & Flower (TSX: FAF) (OTC: FFLWF) reported its FY20-Q2 numbers. Aurora Cannabis moved to the top of the list as its sales grew almost 400% from a year ago. Supreme grew almost doubled sales from the prior quarter as it approached break-even on adjusted operating income. Fire & Flower, which began generating revenue just three quarters ago, grew revenue 16% over the prior quarter. 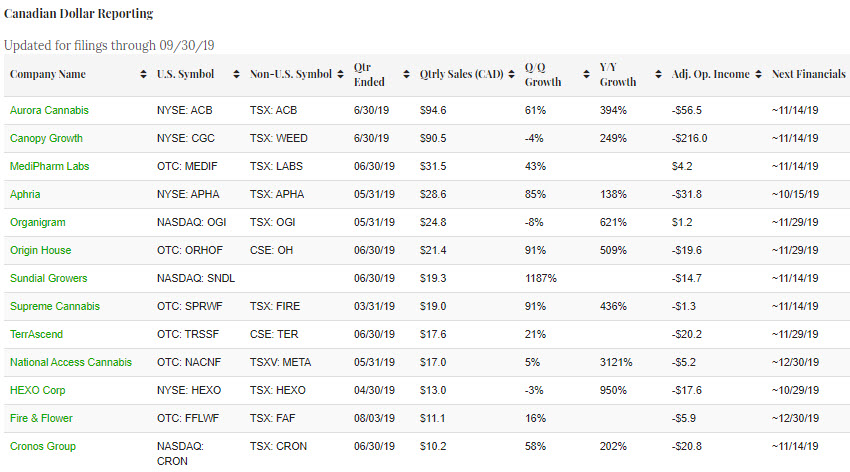 In October, companies expected to report financials include Aphria (TSX: APHA) (NYSE: APHA), which has scheduled a call on October 15th to discuss the quarter ending August 31st. According to Sentieo, Aphria is projected to report Q1 revenue of C$133 million, just slightly higher than in its Q4 results of $128 million. The vast majority of its revenue is not related to cannabis (pharmaceutical distribution), so investors will most likely be looking at cannabis revenue and comparing it to the C$28.6 million the company generated in the prior quarter from that line of business. Analysts project that EPS will be -C$0.01 compared to the C$0.05 in the prior quarter, when the company benefited from a one-time accounting gain. Additionally, HEXO Corp (TSX: HEXO) (NYSE: HEXO) is expected to report its fiscal year ending July 31st by month-end. Analysts project that sales could almost double from C$13.0 million in Q3 to C$25.3 million. EPS are expected to decrease from -C$0.04 to -C$0.05.