Sixteen companies currently qualify for inclusion, with six filing in U.S dollars and ten in the Canadian currency. In the last part of May, two Canadian companies provided financial updates. Golden Leaf Holdings (CSE: GLH) (OTC: GLDFF), which reports in U.S. dollars, produced revenue of $3.2 million in Q1, representing growth of 42% over the prior year but a decline from $4.03 million in Q4. The reason for the decline was the inclusion of royalties in excess of $1 million in the prior quarter. The growth from a year ago reflects the mid-2017 acquisition of Chalice Farms, with the prior business focused on extracts experiencing a decline in revenues generated from a  year ago. The company reported an operating loss of $4.25 million.

Sunniva (CSE: SNN) (OTC: SNNVF), which has operations in Canada and in the United States, generated sales of C$5.16 million in Q1 and an operating loss of C$6.34 million.  Its Canadian clinic operations contributed C$2.7 million in sales, while its vaporizer sales accounted for C$2.5 million. Both of these divisions were acquired during the first quarter of 2017. Sales in the vaporizer business increased approximately 25% from Q4, while the clinic business saw a decline of approximately 31%. On a conference call held on May 31st, management attributed the sequential decline to the loss of one of its twenty-one doctors. 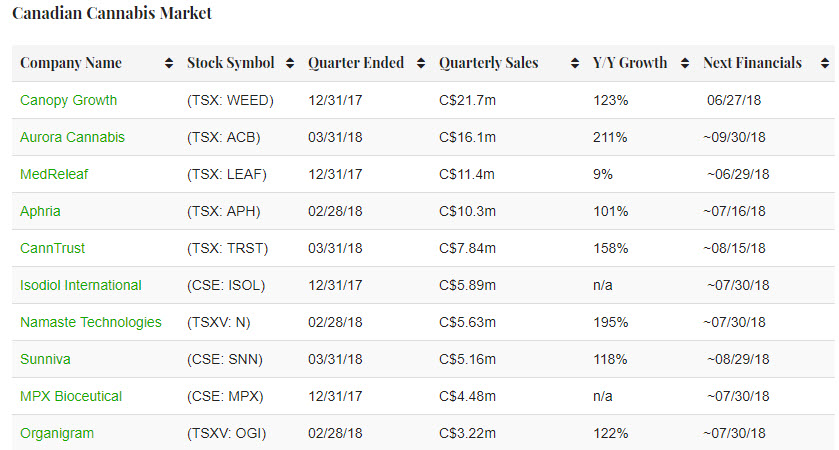