This is a copy of the July 7th edition of our weekly Newsletter, which we have been publishing since October 2015.

This weeks’s announcement by Canopy Growth that its Board of Directors had removed Co-Founder Bruce Linton from the company he started seven years ago surprised the industry. We are sad for our friend and colleague with how his time came to an abrupt end and congratulate him for all that he did for the company and the global industry.

Change at the top is nothing new for the sector, as several LPs have seen leadership changes through consolidation as well as internal changes. Aphria brought in outsider Irwin Simon, who is still Interim CEO but likely, in our view, to shed the “interim” shortly. CannTrust named Peter Aceto to replace its founder late last year. Two years ago, Organigram brought in a new CEO, Greg Engel, who replaced its founder. Of course, Tilray had earlier replaced him as CEO. These companies are 6 of the current 7 leading LPs in terms of revenue, and there are examples from other companies as well.

While investors certainly want to know what lies ahead for Canopy Growth, there will likely be some uncertainty until a new CEO is named. In our view, the company should be able to attract some incredible talent, and we look forward to seeing this process play out. In the meantime, new CFO Mike Lee, a Constellation veteran, certainly has his eye on the ball. We highly recommend that readers review his strategic priorities that he shared on the conference call last month. Specifically, he called for reviewing the global ERP strategy, strengthening financial reporting and controls and accelerating acquisition integrations. All of this is designed to create scalable growth, and we expect that the new CEO picked by Constellation will be one the company expects can drive growth in a more scalable manner than the company has done thus far.

In the immediate aftermath, NY Representative Chuck Schumer was quick to affirm that Canopy Growth will be proceeding with its New York hemp activities, as reported by Marijuana Moment. Canopy Growth has an extensive ecosystem of strategic partners, and we think it would be wise for investors in those companies, many of which are publicly-traded, to affirm that those relationships will proceed under the new leadership. To be very clear, we have no reason to believe that they won’t, but we want to make sure our readers are aware of the several companies that may be facing some uncertainty during this leadership transition at Canopy Growth.

At the top of the list is Canopy Rivers, which also dismissed Linton from his roles there. The company was Bruce Linton’s idea, and it seeks to leverage Canopy Growth’s infrastructure and capital by providing financial and operating support to companies across the industry. Canopy Growth owns 27% of the issued shares and over 85% of the voting power.

Another obvious question is what the change means for Acreage Holdings. We checked in with CEO Kevin Murphy, who is highly optimistic that the affiliation will continue. As a reminder, he and his shareholders just received an option payment of $2.63 per share ($300 million in total) for a future potential acquisition when permissible at a the fixed share price of .5812 shares of Canopy for each share of Acreage. We interviewed Murphy earlier this year, and he shared his expectation that ultimately Constellation will buy in both Canopy Growth and his company.

Canopy Growth has two significant stakes in U.S. operators beyond its arrangement with Acreage Holdings, including non-voting stock in TerrAscend as well as warrants in SLANG Worldwide. One area where the company has forged several strategic partnerships is in extraction, with suppliers including MediPharm Labs, Neptune and Valens GroWorks, all publicly-traded, as well as HollyWeed North, which is expected to debut in public trading near the end of the year.

While many were surprised by the sudden move by the Canopy Growth Board of Directors, we think investors should be prepared for more changes ahead after a period of substantial M&A and capital raising and an evolving market that is becoming more global and supported by institutional investors.

Unlike the business model of most operators, DionyMed is a multi-state cannabis distribution and direct-to-consumer delivery platform that is bringing today’s leading cannabis brands to consumers. Developing both wholly owned in-house brands and selling a curated portfolio of partner brands to over 900 retail dispensaries across the country, DionyMed is finding success as it scales up. The company recently recognized Q1 revenue of $14.4M and has signed three agreements to acquire and expand into new markets. 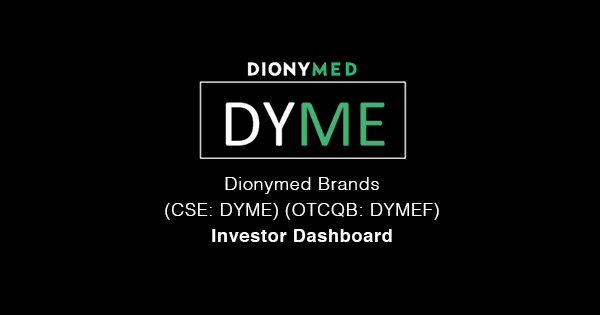 To learn more about DionyMed, also known as DYME Brands, a client of New Cannabis Ventures, visit the company’s Investor Dashboard that we maintain on its behalf and click the blue Follow Company button to get updates with their progress.