The publicly-traded cannabis stocks have enjoyed an immense rally that began on 9/1, fueled by speculation regarding this week’s legalization ballot initiatives in Arizona, California, Maine, Massachusetts and Nevada along with ballot initiatives regarding medical cannabis in Arkansas, Florida, Montana and North Dakota.  This was something I had been anticipating all year, conveying my perspective most recently in the September edition of the 420 Investor Newsletter published on August 31st.  In September, I shared three trade ideas here, each of which has wildly exceeded the target prices:

The overall market suffered two big declines to end the week down, the first decline since the rally started.  Still, the gains since 8/31 have been immense, with the Friday close of 76.67 for the Cannabis Stock Index 131% above the level at the end of August.  At the peak of 87.08 on 11/2, the index had rallied almost 163%. 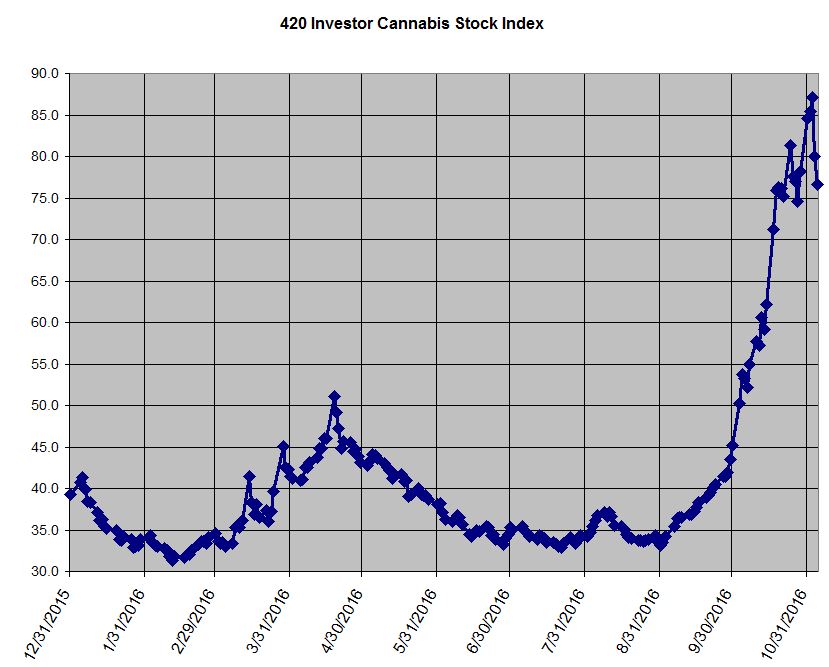 This certainly isn’t the first time the index has jumped like this. In early 2013, the index more than doubled in a couple of weeks, a delayed reaction to the legalization votes in Colorado and Washington in November 2012.  Of course, the implementation of legalization at the beginning of 2014 set off a rally of unprecedented proportions, with the index surging over 500% from year-end 2013 to mid-March: 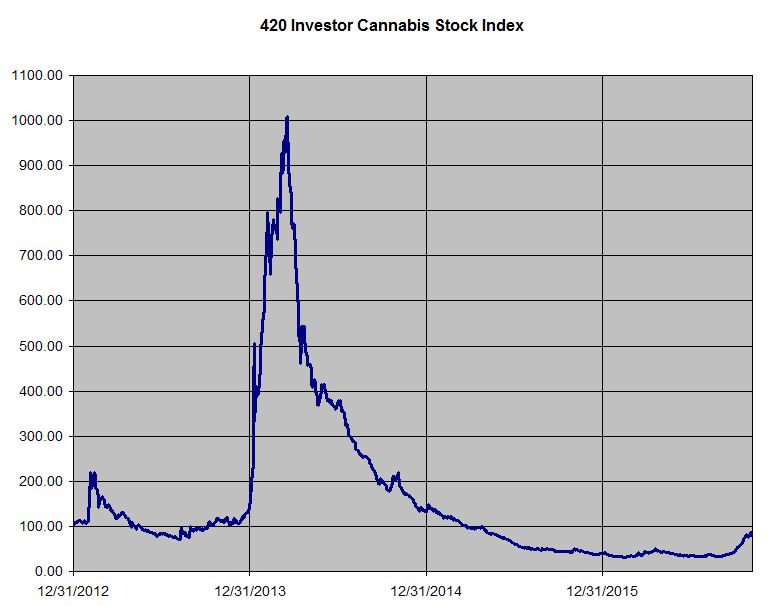 It’s that spike in early 2014 that has many traders salivating. Can it happen again? I updated my views in the November edition of the 420 Investor Newsletter, sharing my perspective on how the market is much different today than it was back then. In 2014, there were not that many cannabis stocks (or so-called cannabis stocks), so the media frenzy brought in lots of new traders looking to cash in on the next big thing and chasing momentum.  It didn’t take long for the number of companies to increase dramatically. Today, I count almost 400 OTC companies that purport to be in the cannabis industry, and that number is rising each week as companies issue press releases about their big plans.

In addition to a dramatically greater number of companies today than in 2014, there are holders of stock from back then who are still underwater and likely looking to sell near their cost. I mentioned another factor, insider selling, and that has started to kick in as well. A week ago I wrote about several companies seeing sales by management and directors. Finally, truth week begins in the next few weeks. What is truth week?  The quarterly filings from most of the companies (those with years ending in December, March or June), which almost always seems to depress cannabis stocks for a variety of reasons, chiefly that the dilution and poor financial condition are revealed.

At 420 Investor, I lead a community that would love nothing more than to see a sustainable rally in cannabis stocks rather than a speculative bubble like we are experiencing now. Unfortunately, the fundamentals are lacking for the vast majority of the companies that trade on the OTC. Many don’t file with the SEC, an obvious red flag. Others have no financial ability to pursue their business plans: Too much debt, no assets, negative cash flow and no access to capital.  Even if this weren’t the case, most face another obstacle: High valuations.

While this isn’t an exhaustive list, here are just some of the examples that strike me as ludicrous:

One thing that I have noticed is that companies with the words “cannabis” or “marijuana” as part of their names have performed better than average. This is because traders unfamiliar with the market or incapable of doing basic due diligence gravitate to these “obvious” choices.  Since 8/31, the market, as I mentioned above, has rallied 131%.  Here are several stocks that were blessed with a good name that have far exceeded the average:

I believe that this list is fairly exhaustive, but I may have missed one or two. One big dud has been Cannasys (OTC: MJTKD), which has imploded all year and has continued to do so after a recent reverse split (which gives it the “D” on the end for a few more days). That stock is down almost 69%. Note that several of the names above don’t file with the SEC (CGRW, MCOA and MJNA). Additionally, some have seen some insider selling (AMMJ, where the CEO dumped over 200K shares  on Wednesday and Thursday, CANN, CBDS, CBIS and CNAB). It’s very difficult to determine when insiders at companies that don’t file with the SEC are selling, so caveat emptor with CGRW, MCOA and MJNA.

The most likely scenario, in my view, is that the rally will stall or reverse soon. The legalization of Oregon and Alaska in 2014, though certainly not as big as the states this year, inspired zero rally. There is quite a long lag between successful ballot initiatives and the implementation, and the next market catalyst will likely be in 2018, when those states that do legalize this week are likely to implement. Make no mistake, legalization votes, especially in California and Massachusetts, are a huge catalyst for the industry, but not for most of the publicly-traded stocks, as they don’t really represent the real cannabis industry. There are a handful of names that are poised to benefit from legalization in these states. Another long-shot is that a Democrat-controlled Senate could pave the way for thoughtful legislation on many key issues that has been held up by Senator Chuck Grassley in the Judiciary Committee.

I called this rally to the day, but calling the top in terms of price and date is a bit more challenging and likely depends on the outcomes Tuesday. There are very few who are willing to call out the “greater fool” trade, while many promote it, including newsletters and paid stock promoters. My “Flying High” model portfolio, which is up 372% this year, remains pretty long the market, with only 21% cash, but I will be looking to reduce exposure in the coming days. We are late in the game now. I suggest that those intrigued by the cannabis theme consider the advice of edibles manufacturers: Start low and go slow.

For those that are optimistic, I have identified a handful of OTC companies that I think have far more realistic valuations than the vast majority of the cannabis stocks (and none of them have “cannabis” or “marijuana” in the name!).  I remain a long-term bull on Canada and am especially optimistic about one of the publicly-traded LPs. Additionally, GW Pharma (NASDAQ: GWPH) has corrected recently along with the biotech sector and offers a good entry about a month before it will be sharing extensive Epidiolex data an the American Epilepsy Society meeting. The bottom line is that there are some smarter choices for those who do want to be invested.

I often joke that the “420 Investor” name was premature, as with the exception of GWPH and the Canadian stocks, there have been few real investment opportunities (though plenty of trades). This current rally may have a bit further to go, but traders and investors should be very cautious given the unsustainable nature of the rally for the OTC stocks. One important event to track is the potential IPO of Innovative Industrial Properties, as this marks a real milestone for the publicly-traded sector if it is successful. Despite my caution near-term for the publicly-traded OTC cannabis stocks, I am very optimistic for the industry and am hopeful that better options will become available for investors in 2017.