As we transition to what we have called the third wave of cannabis investing, we think it’s worth reflecting on some of the things that went wrong in the second wave, a list too long to cover entirely in this newsletter today. One of the biggest disappointments of the past few years has been the failure to date of two major strategic investments into the cannabis industry to create value.

In October 2017, Canopy Growth announced the initial investment by Constellation Brands, a first of its kind for the industry. The transaction included an initial investment of C$245 million for 9.9% of the company (18.877 million shares at C$12.98). It also received warrants to purchase the same number of shares at the same price within 30 months, which it exercised at the beginning of May. In June of 2018, Constellation took down 1/3 of the C$600 million convertible notes Canopy Growth issued, with the 4.25% notes maturing in 2023 and convertible at C$48.18 per share. Of course, the bigger deal took place two months later, in August, when Constellation invested C$5 billion at C$48.60 per share, picking up warrants as well.

Less than a year after Constellation effectively took control of the company, it abruptly sent co-founder and co-CEO Bruce Linton packing, and the company is still trying to fix the mess it bought into. Former Constellation CFO David Klein, who now serves as Canopy’s CEO, and Mike Lee, another Constellation veteran who is now Canopy’s CFO, laid out aggressive restructuring plans on the conference call discussing disappointing financial results for the fiscal year ending in March. He explained that the company’s prior strategy of being first in all areas was unsound, leading it to become less agile. The plan he laid out appears sound, but the company, which already failed to meet the top-line goals Constellation had conveyed after making its larger investment, will not meet current expectations either.

In December 2018, the first quarter that included Constellation’s C$5 billion investment, Canopy reported cash of C$4.9 billion and total equity of C$7.4 billion (C$5.4 billion tangible). It generated revenue during that quarter of C$83 million. 5 quarters later, the net revenue, a lot of which came from subsequent acquisitions, was C$108 million. Cash has declined to C$2 billion, and equity has declined to C$5.1 billion (C$2.7 billion tangible). In addition to the weak financial metrics, the stock trades at less than 50% of the price Constellation paid to take effective control. The warrants that would allow Constellation to take its ownership above 50% are struck above C$50 and as high as C$76.68, expiring on November 1, 2021.

Here is how Canopy Growth, Constellation Brands and the S&P 500 have traded since August 15, 2018, when the C$5 billion investment was announced: 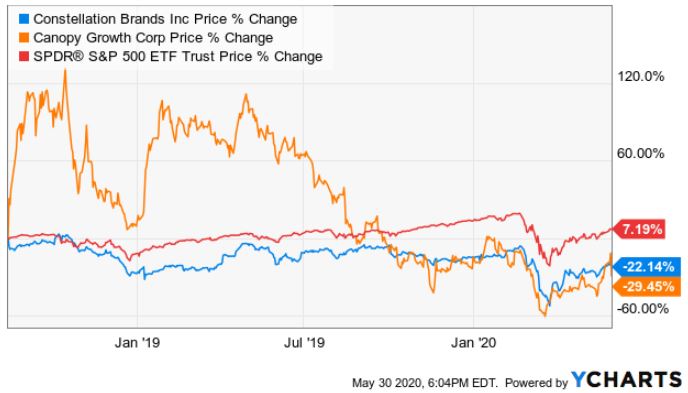 The other big strategic investment took place a couple of months after the C$5 billion investment by Constellation, with Altria investing C$2.4 billion into Cronos Group, buying 45% of the company at C$16.25 (146.2 million shares), with warrants at C$19 to buy another 10% of the company that expire on March 8, 2023. Cronos trades well below the price Altria paid and more than 50% below the warrant exercise price. The company hasn’t delivered significant revenue a year later, though it’s not clear if that was ever its goal. Like Canopy, the balance sheet has eroded due to cash burn and M&A, though the deterioration of its financials hasn’t been as severe.

Here is how Cronos Group, Altria and the S&P 500 have performed since the deal was announced on December 7, 2018: 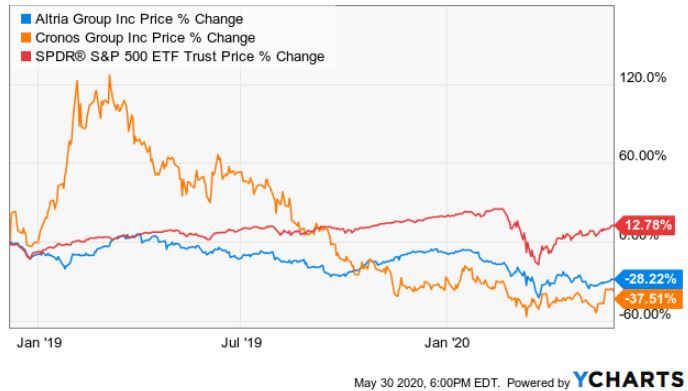 It’s too early to conclude that Constellation and Altria picked the wrong horses or that their investments won’t work out, but, more than a year later, both strategic investors are looking at large paper losses and not a lot of progress. We wonder if the failure to create value has hindered additional strategic investments into the industry, especially given that the stocks of both Altria and Constellation have declined since the large investments were announced despite the S&P 500 gaining during those periods of time.

Constellation and Altria bought into a frothy market, right as Canada legalized for adult-use. Strategic investors have not only more information available now along with the time to have conducted extensive due diligence, which we understand has been taking place, but they can now buy into a market that isn’t as expensive. We have been disappointed with how long it has taken for the next strategic investment into the cannabis industry, but we expect to see one in the coming quarters. This time it likely won’t be driven by fear of missing out. 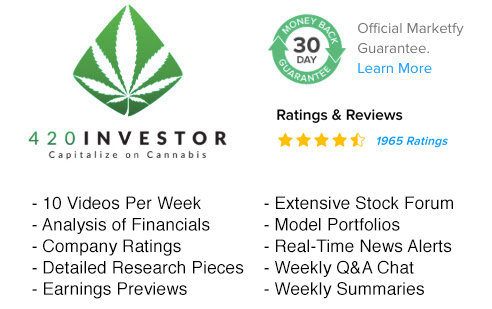 Real-time, market moving news and analysis! Cut out the noise and get the facts straight from the longest running full-time cannabis analyst.