The Public Cannabis Company Revenue & Income Tracker, managed by New Cannabis Ventures, ranks the top revenue producing cannabis stocks that generate industry sales of more than US$12.5 million per quarter (C$16.1 million). This data-driven, fact-based tracker will continually update based on new financial filings so that readers can stay up to date. Companies must file with the SEC or SEDAR and be current to be considered for inclusion. Please note that we have raised the minimum quarterly revenue several times as the industry has scaled up, including from US$10.0 million in November 2020, US$7.5 million in June 2020, US$5.0 million in October 2019 and US$2.5 million in May 2019.

38 companies currently qualify for inclusion, with 27 filing in U.S. dollars and 11 in the Canadian currency, which is unchanged from our update a month ago. We continue to expect additional companies to qualify in the future, including some newly public IPOs

In January, only KushCo Holdings (OTC: KSHB) provided a financial update among those companies reporting in American dollars. The company’s revenue was slightly behind expectations, but it posted its second consecutive quarter of positive adjusted EBITDA. KushCo raised its full year guidance for the fiscal year ending in August 2021 for revenue of $230-260 million, up $10 million from its previous forecast, with expected adjusted EBITDA of $5-7 million. 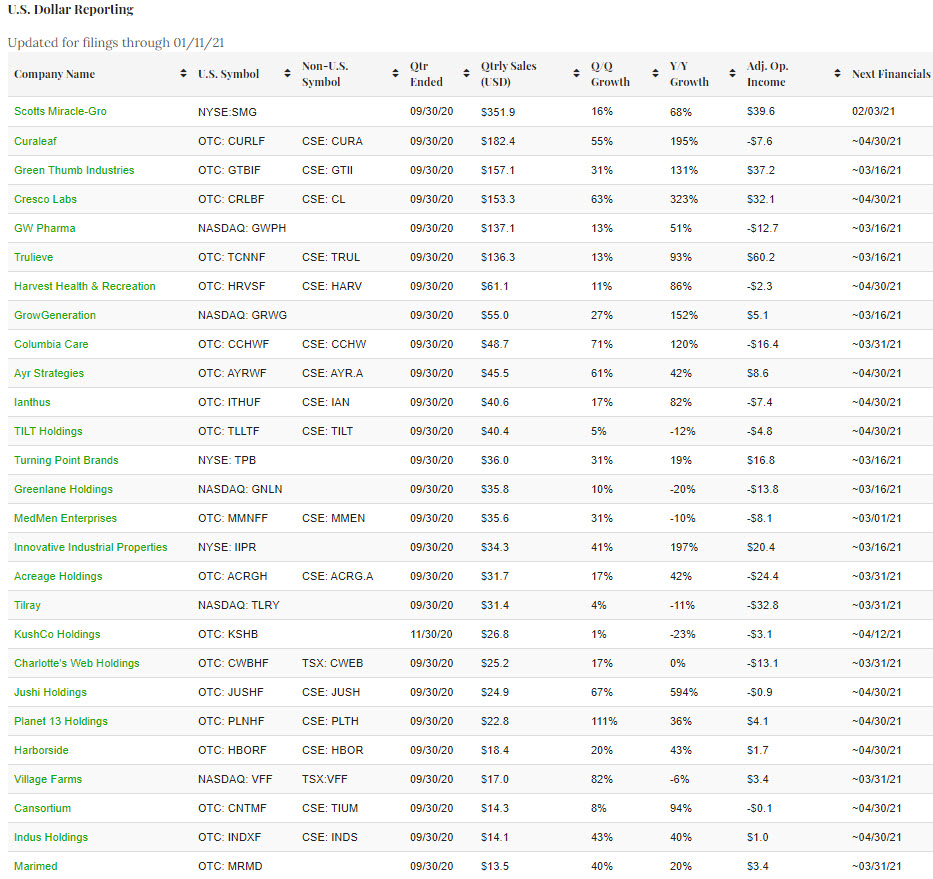 In February, only Scotts Miracle-Gro (NYSE: SMG) is expected to report. According to Sentieo, analysts expect the fiscal Q1 revenue will increase 71% from a year ago to $624 million. A year ago, sales from its cannabis-focused Hawthorne division were $198.8 million, 54.4% of total revenue. Analysts expect the company to report adjusted EPS of -$0.77 during the seasonally low quarter for its lawn and garden products. The company has provided full-year guidance for overall revenue to increase from 0-5%, with its Hawthorne division growing 15-20%. Analysts expect fiscal 2021 revenue to grow 4% to $4.3 billion. Hawthorne sales, at $1.08 billion, represented over 26% of total revenue in fiscal 2020. It also expects its non-GAAP EPS to be $8-8.40. Analysts currently project it will be $8.26, up 14% from fiscal 2020.

Since our last update, Aphria (TSX: APHA) (NASDAQ: APHA) and Organigram (TSX: OGI) (NASDAQ: OGI) reported. Aphria had been expected to report overall revenue of C$153 million, and it exceeded the consensus, with fiscal Q2 revenue growing 33% to C$160.5 million. The quarter included a small amount of revenue from recently acquired SweetWater craft beer along with almost C$92 million of revenue from pharmaceutical distribution. Net cannabis revenue of C$67.9 million grew sequentially due to international revenue of C$5.3 million offsetting a C$3 million decline in wholesale revenue and modest growth in adult-use. The company’s reported adjusted EBITDA from its cannabis operations almost quadrupled to C$12.9 million during the quarter. Organigram’s fiscal Q1 revenue fell short of expectations, declining modestly from Q4 to C$19.3 million. Analysts had expected C$21.4 million. The steep decline from a year ago was due to the non-recurrence of wholesale sales. Revenue from adult-use rose 42% compared to the prior year. The company’s adjusted EBITDA loss improved to C$9.5 million from C$13.8 million in Q4.

Over the next month, several companies will report, including two of the largest LPs, Canopy Growth (TSX: WEED) (NASDAQ: WEED) and Aurora Cannabis (TSX: ACB) (NYSE: ACB). Additionally, Liberty Health Sciences (CSE: LHS) (OTC: LHSIF) is expected to release its financials today, while Valens Company (TSX: VLNS) (OTC: VLNCF) has said it expects to file its year-end results by the end of February.

Canopy Growth’s fiscal Q3 ending in December is expected to have seen revenue grow 11% sequentially to C$150 million, according to Sentieo. This would represent annual growth of 22%. Analysts expect adjusted EBITDA to be -C$73.3 million, an improvement from -C$85.7 million in Q2. In December, the company ceased operations at several facilities in Canada as part of a cost-savings program and will take charges of C$350-400 million during Q3 and Q4. Canopy’s Q2 revenue was generated 30% from Canadian adult-use cannabis, 14% from its Canadian retail operations, 11% from Canadian medical, 13% from international medical and 32% from other sources, including vaporizer sales and non-cannabis operations.

Aurora Cannabis fiscal Q2 revenue is expected to be C$70 million, up 25% from a year ago and 3% from Q1. The company has ceded market share in the value flower segment to focus on profitability, and it has cut back its production by closing one facility, Aurora Sun, and reducing it at its main Aurora Sky to just 25% of capacity. Analysts expect adjusted EBITDA to be -C$3.3 million, a substantial improvement from -C$57.9 million in the prior quarter and -C$80.3 million a year ago.

Liberty Health, which has announced its pending sale to Ayr Strategies (CSE: AYR.A) (OTC: AYRWF) is very likely to fall off the list, as its sales will almost certainly decline substantially from its fiscal Q2 and could possibly decline from a year ago, based on data published by Florida. Valens recently pre-announced its fiscal Q4 revenue for its year ending in October be between $15 and $16.5 million on a net basis. Analysts had expected C$21.7 million. The company provided guidance for Q1 revenue to be C$19-23 million.

For those interested in more information about companies reporting, we publish comprehensive earnings previews for subscribers at 420 Investor, including for Focus List members Aurora Cannabis, Canopy Growth and Scotts Miracle-Gro.