Due to the rapid growth in the cannabis industry, we raised the minimum to US$25 million (C$32 million) to qualify for what we are now calling the senior list and introduced a junior list with a minimum of US$12.5 million (C$16.0 million) in September. At the time of our last update in late December, 36 companies qualified for inclusion on the senior list, including 30 filing in U.S. dollars and 6 in the Canadian currency. The junior list now includes 13 reporting in U.S. dollars and 4 in Canadian dollars. On a combined basis, the Public Cannabis Company Revenue & Income Tracker includes 53 companies. There were no additions or deletions this month. We expect to add additional companies in the months ahead, and, due to pending or recently completed mergers, we anticipate some removals as well. We note that Intercure (TASE: INCR) (NASDAQ: INCR), which reports in the Israeli currency, qualifies for the junior list, but we haven’t yet added it due to its different reporting currency.

Since our last update, only Tilray (TSX: TLRY) (NASDAQ: TLRY) has reported among companies reporting in the U.S. currency. It had been expected generate overall revenue of $173 million, with adjusted EBITDA of $14.3 million, but the actual results for its fiscal Q2 ending in November were revenue of $155 million and adjusted EBITDA of $13.8 million. We had shared a negative outlook for Tilray’s cannabis business just ahead of the report, and the actual results were worse than we had expected. Overall cannabis revenue declined 17% sequentially to $58.8 million despite growth in its international business. Its Canadian adult-use sales plunged 30% from Q1 to $34.9 million. 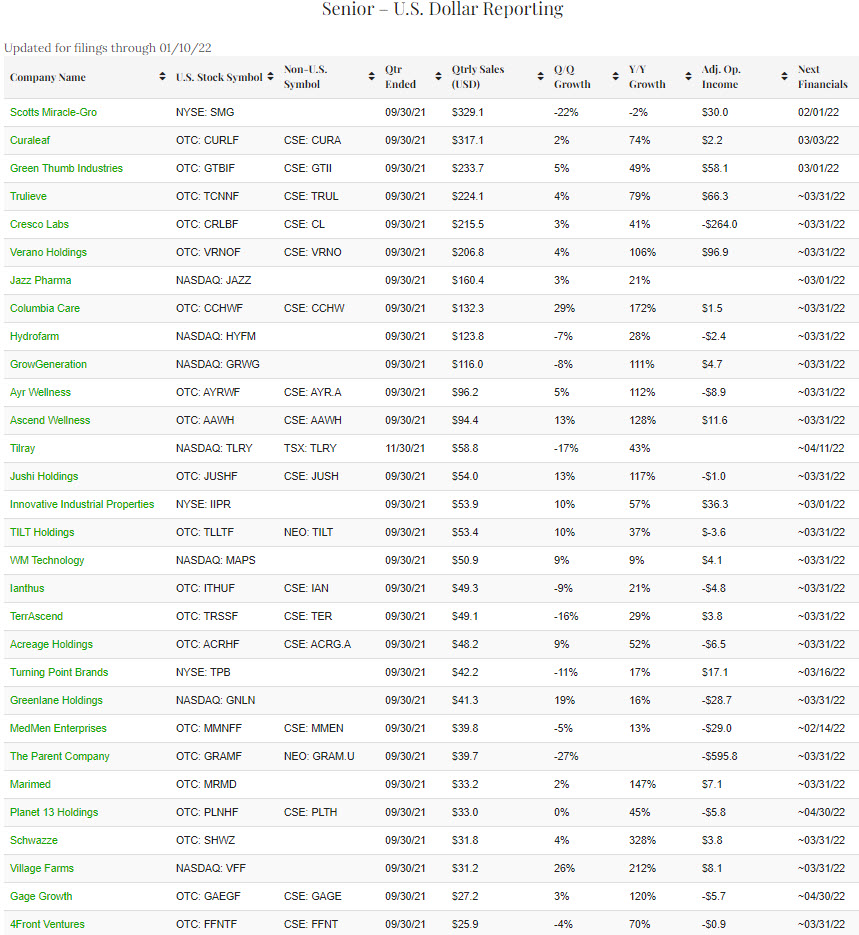 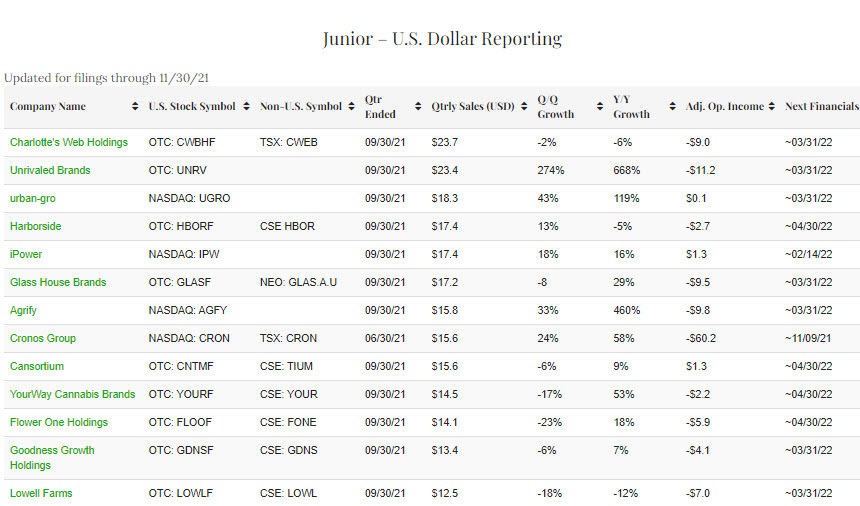 In February, Scott’s Miracle-Gro (NYSE: SMG) will report its fiscal Q1. The company has already pre-announced that its Hawthorne Gardening sales fell approximately 40% from a year ago. According to Sentieo, overall revenue for the company is expected to have decreased 25% to $561 million, with adjusted EBITDA of -$1 million and EPS of -$0.72. MedMen (CSE: MMEN) (OTC: MMNFF) is expected to report its Q2 in February as well, while Jazz Pharma (NASDAQ: JAZZ) and Innovative Industrial Properties (NYSE: IIPR) will report their Q4 results. Cronos Group (TSX: CRON) (NASDAQ: CRON), which remains delinquent in its filings from Q3, is expected to report in February as well, with revenue expected to have increased 20% sequentially to $18.7 million.

The largest MSOs will begin to report Q4 results in early March, with calls scheduled for Green Thumb Industries (CSE: GTII)(OTC: GTBIF) on 3/1 and Curaleaf (CSE: CURA) (OTC: CURLF) on 3/3. GTI is expected to have generated revenue of $239 million, up 35% from a year ago, with adjusted EBITDA of $83 million. up 35%. Curaleaf revenue is expected to increase 42% to $326 million, with adjusted EBITDA increasing 46% to $78 million.

For companies reporting in the Canadian currency, High Tide (TSXV: HITI) (NASDAQ: HITI) and Organigram (TSX: OGI) (NASDAQ: OGI) both reported results in line with or better than what had been expected during January. High Tide moved up the Canadian rankings to the third spot, with sales increasing sequentially to C$53.9 million during its fiscal Q4 ending in October. The company guided for Q1 revenue of approximately C$70 million, which would rank it second. Organigram fiscal Q1 revenue of C$30.4 million expanded 22% sequentially and 57% from a year ago. 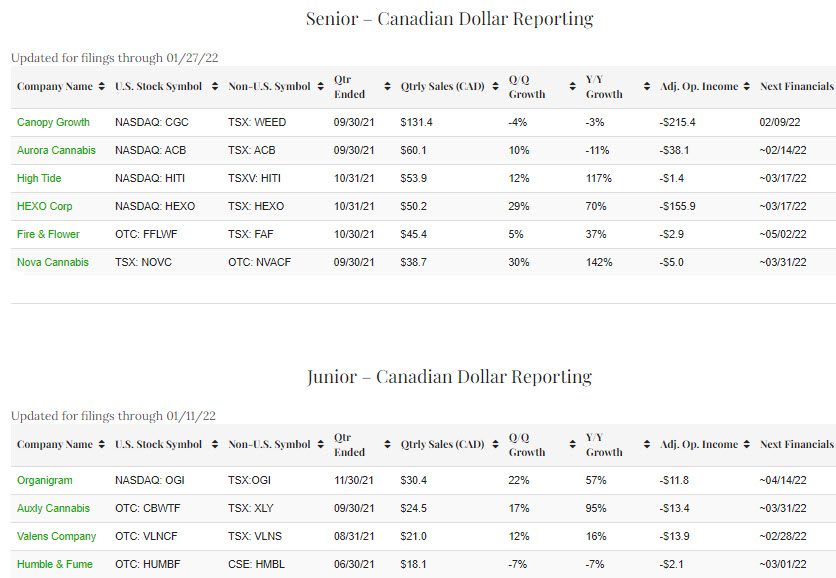 In February, Canopy Growth (TSX: WEED) (NASDAQ: CGC) and Aurora Cannabis (TSX: ACB) (NASDAQ: ACB) from the senior list will report along with Valens (TSX: VLNS) (NASDAQ: VLNS) and Humble & Fume (CSE: HMBL) (OTC: HUMBF) from the junior list. According to Sentieo, Canopy Growth is expected to have experienced a 9% revenue decline in its fiscal Q3 to C$139 million, with adjusted EBITDA of -C$110 million. One unknown is how the company will report the revenue from its German division, that it is divesting. It contributed C$11.9 million to revenue in Q2. Aurora Cannabis is expected to have generated C$58 million in its fiscal Q2, down 14% from a year ago, with adjusted EBITDA of -C$12 million. Valens is expected to have generated C$24.6 million revenue in its fiscal Q4 ending in October, up 53%.