The American Cannabis Operator Index moved higher for the fifth consecutive month in February, advancing 20.5% to 93.70: 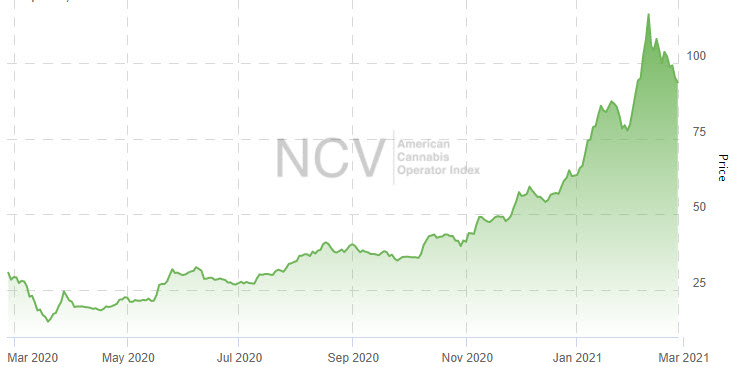 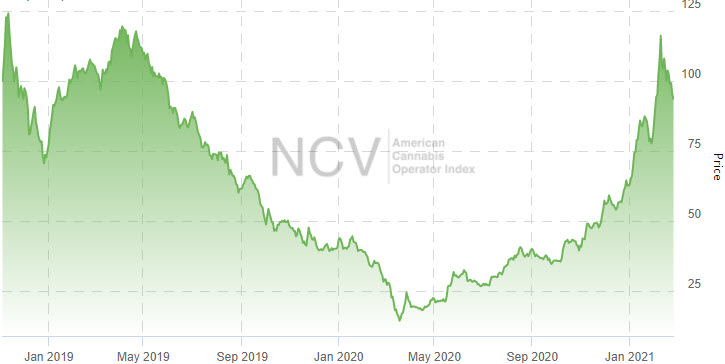 During February, the index included 34 companies, including 31 multi-state operators (MSOs) and 3 focused solely on CBD extracted from industrial hemp. Five companies posted returns in excess of 40%, while four declined during the month: 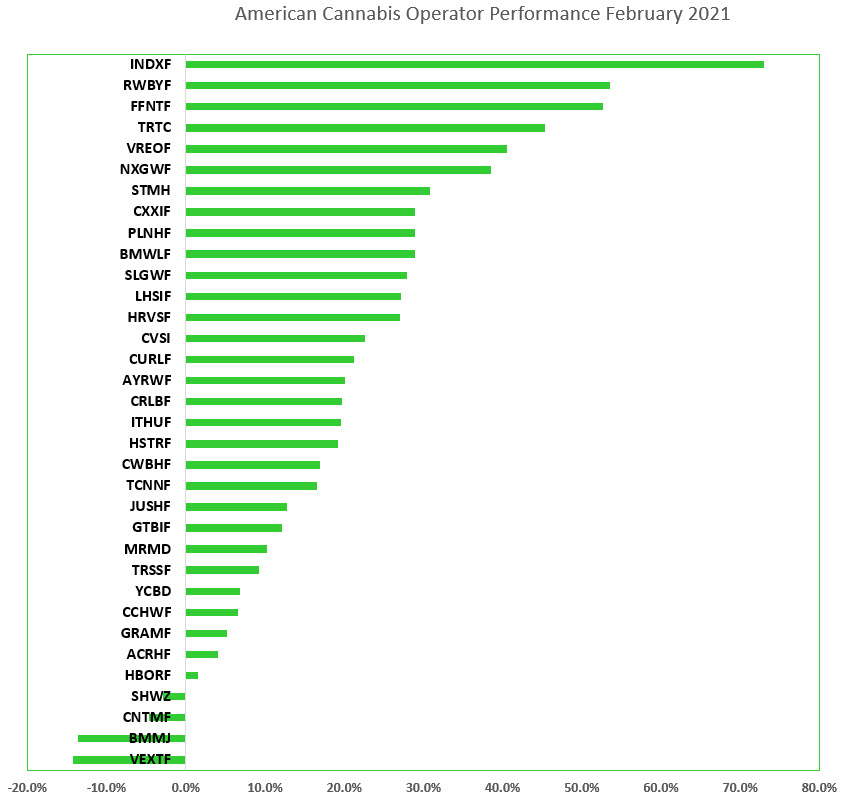 The four best performing stocks in January included Indus Holdings (CSE: INDS) (OTC: INDXF), Red White & Bloom Brands (CSE: RWB) (OTC: RWBYF), 4Front Ventures (CSE: FFNT) (OTC: FFNTF) and Terra Tech (OTC: TRTC). Indus Holdings, which will be changing its name shortly to Lowell Farms to reflect the acquisition, acquired California cannabis operator Lowell Herb Co. for $39 million. The stock, which had declined modestly in January, is now up 68.4% year-to-date. Red White & Bloom raised $6.1 million through a private placement convertible note and also raised $8 million through warrant exercises and $7 million through the sale of debentures with warrants to fund a pending acquisition in Illinois. The company expanded the Platinum brand to Arizona and also entered Florida with the pending acquisition of the operations of Acreage Holdings for $60 million. 4Front announced the departure of its CFO but had no news otherwise. Similarly, there were no news released by Terra Tech during the month.

The four worst performing stocks included Vext Science (CSE: VEXT) (OTC: VEXTF), Body and Mind (CSE: BAMM) (OTC: BMMJ) Cansortium (CSE: TIUM.U) (OTC: CNTMF) and Schwazze (OTC: SHWZ). Vext Science closed a C$20.7 million sale of units during the month. Body and Mind reported its fiscal Q1 financials, which showed strong growth, but the stock was hit perhaps by sales made by outside investor Australis Capital. Cansortium fell for the second consecutive month, perhaps a reflection of disappointment from investors after seeing some of its Florida competitors be acquired. The company amended it convertible notes, extending the maturity by almost two years but also sharply reducing the conversion price. Schwazze, which was one of the strongest performers in January, repriced all of its options lower during the month. It also acquired two additional Star Buds dispensaries in Colorado for $9.3 million in cash, debt and preferred shares.