Due to the rapid growth in the cannabis industry, we raised the minimum to US$25 million (C$32 million) to qualify for what we are now calling the senior list and introduced a junior list with a minimum of US$12.5 million (C$16.0 million) in September. At the time of our last update in late October, 36 companies qualified for inclusion on the senior list, including 31 filing in U.S. dollars and 5 in the Canadian currency. We have removed Harvest Health & Recreation and KushCo Holdings subsequently following their acquisitions, have moved Village Farms (TSX: VFF) (NASDAQ: VFF) up and have added Nova Cannabis (TSX: NOVC) (OTC: NVACF), previously on the Canadian junior list, leaving the senior list membership at 36, including 30 that report in American dollars and 6 that report in Canadian dollars. The junior list now includes 13 reporting in U.S. dollars, with the addition of Unrivaled Brands (OTC: UNRV) and iPower (NASDAQ: IPW) and 4 in Canadian dollars, with the removal of Delta 9 Cannabis (TSX: DN) (OTC: DLTNF). On a combined basis, the Public Cannabis Company Revenue & Income Tracker includes 53 companies. We expect to add additional companies in the months ahead, and, due to pending or recently completed mergers, we anticipate some removals as well. We note that Intercure (TASE: INCR) (NASDAQ: INCR), which reports in the Israeli currency, qualifies for the junior list, but we haven’t yet added it due to its different reporting currency.

Since our last update, the vast majority of companies included in the tracker have reported. The very largest cannabis operators were roughly in line with expectations with modest sequential growth. Curaleaf (CSE: CURA) (OTC: CURLF) among the five largest MSOs, was the only one to suffer an erosion in profitability and to miss expectations substantially. Beneath the largest MSOs, several others fell a bit short of expectations but still experienced sequential growth for the most part. The outlooks for several of these stocks were reduced. Some of the big themes of the quarter included extreme weakness in California as well as competition heating up in Florida and Pennsylvania. Additionally, regulatory delays in New Jersey are weighing on several companies, with the state still not having set a start date for adult-use sales. The largest ancillary names struggled during Q3, with Scotts Miracle-Gro (NYSE: SMG), Hydrofarm (NASDAQ: HYFM) and GrowGeneration (NASDAQ: GRWG) all suffering sequential declines in revenue. The weakness in California, especially, as well as delays in new markets opening weighed on the near-term results and diminished outlooks. 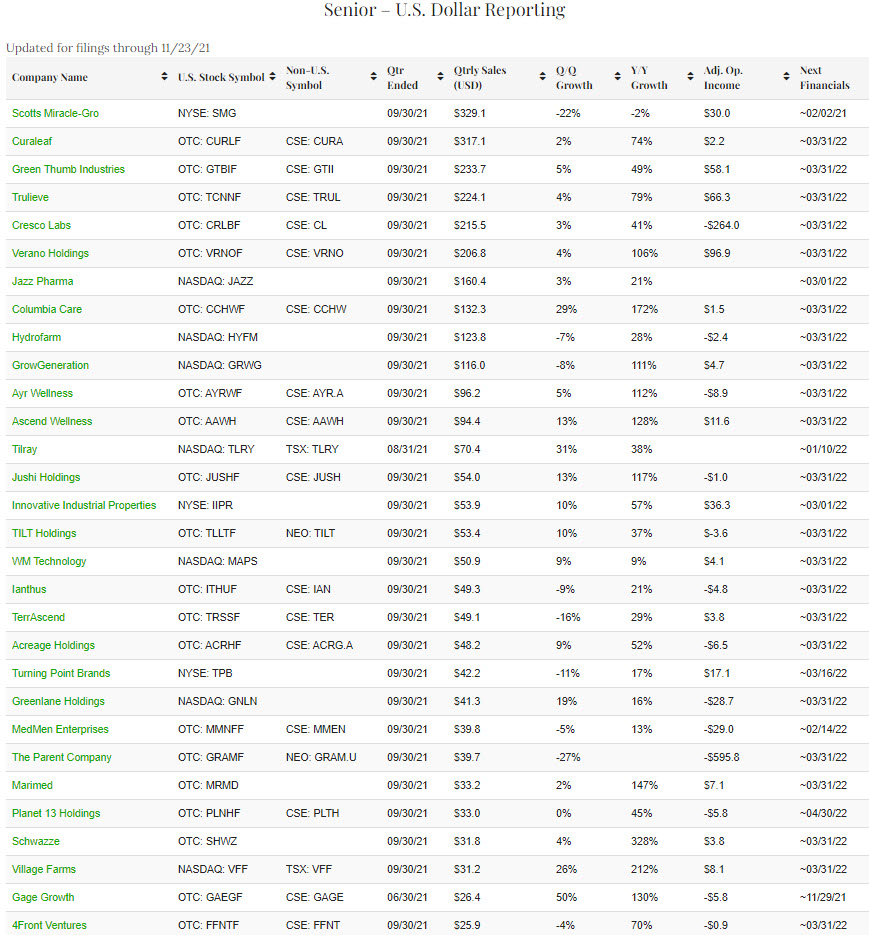 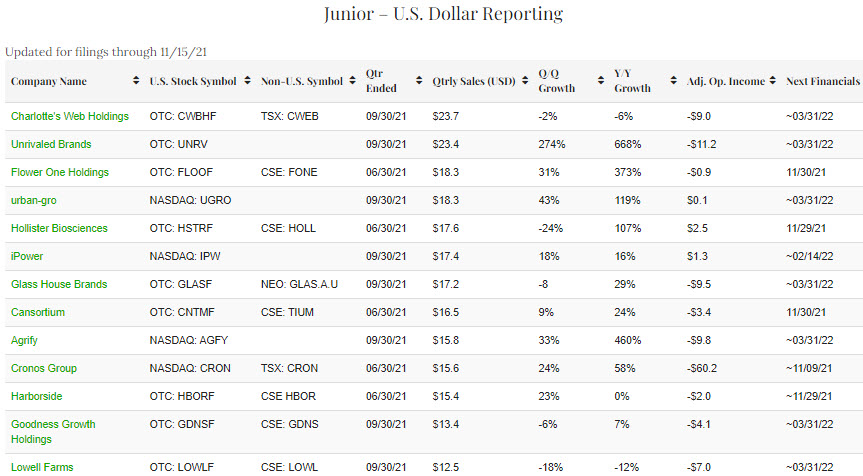 While most of the companies have reported, a few will be reporting in the days ahead. On the junior list, Cronos Group (TSX: CRON) (NASDAQ: CRON) remains delinquent, while Cansortium (CSE: TIUM.U) (OTC: CNTMF), Flower One Holdings (CSE: FONE) (OTC: FLOOF), Harborside (CSE: HBOR) (OTC: HBORF) and Hollister Biosciences (CSE: HOLL) (OTC: HSTRF) will be reporting imminently. There are no other members of the tracker that report in American dollars expected to report until January.

During November,  Canopy Growth (TSX: WEED) (NASDAQ: CGC) and Aurora Cannabis (TSX: ACB) (NASDAQ: ACB) as well as retailer Nova Cannabis reported from the senior list, while Organigram (TSX: OGI) (NASDAQ: OGI), Auxly Cannabis (TSX: XLY) (OTC: CBWTF) and newly public Humble & Fume (CSE: HMBL) (OTC: HUMBF) provided financials from the junior list. Canopy Growth missed analyst expectations for its fiscal Q2 as revenue fell from the prior quarter and a year ago despite the addition of revenue from recently acquired Supreme Cannabis. The company pushed out its forecast of when it will become profitable as measured by adjusted EBITDA. Aurora Cannabis fiscal Q1 revenue also declined from a year ago but only modestly missed expectations. 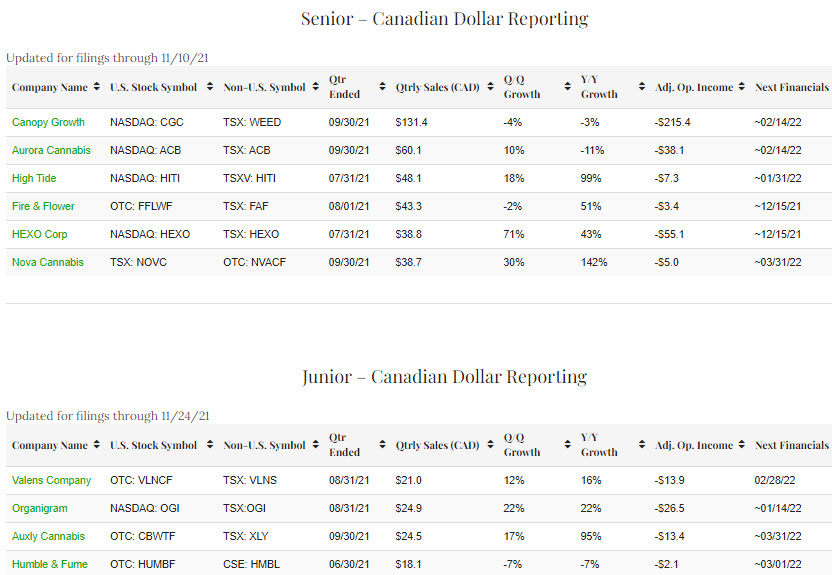 During December, two senior list companies will report financials, including retailer and data analytics company Fire & Flower (TSX: FAF) (OTC: FFLWF) and licensed producer HEXO Corp (TSX: HEXO) (NASDAQ: HEXO). According to Sentieo, Fire & Flower is expected to see modest sequential growth in its fiscal Q3, while HEXO, which recently closed the acquisition of Redecan, is expected to have generated revenue of C$52 million in its fiscal Q1, up 77% from a year ago, with adjusted EBITDA of -C$6 million.

For those interested in more information about companies reporting in November, we publish comprehensive earnings previews for subscribers at 420 Investor, including for Focus List members mentioned here, Cronos Group, Fire & Flower and Harborside.