The Public Cannabis Company Revenue Tracker, managed by New Cannabis Ventures, ranks the top revenue producing cannabis stocks that generate industry sales of more than US$5.0 million per quarter. This data-driven, fact-based tracker will continually update based on new financial filings so that readers can stay up to date. Companies must file with the SEC or SEDAR to be considered for inclusion. Please note that we raised the minimum quarterly revenue in May from US$2.5 million, and we anticipate a further increase from US$5.0 million by the end of September, perhaps earlier.

48 companies currently qualify for inclusion, with 29 filing in U.S dollars and 19 in the Canadian currency. Since our last report at the end of July, the new additions include U.S. dollar reporting companies MSO AYR Strategies (CSE: AYR) (OTC: AYRSF) and consultant and hemp company MariMed (OTC: MRMD) and Canadian dollar reporters, including Canadian LPs Cronos Group (TSX: CRON) (NASDAQ: CRON) and Sundial Growers (NASDAQ: SNDL) and retailer Alcanna (TSX: CLIQ) (OTC: LQSIF). We are not able to include Elixinol Global (ASX: EXL) (OTC: ELLXF) and Greenlane (NASDAQ: GNLN), which would otherwise qualify but don’t break out their cannabis-related revenue. We also note that Scotts Miracle-Gro (NYSE:SMG) derives substantial cannabis-related revenue through its Hawthorne Gardening operations, but we are unsure of the exact amount and, thus, aren’t including it at this time.

In the first part of August, there were 20 financial reports from companies that report in American dollars, including, among those above $ 20 million in revenue, GW Pharma (NASDAQ: GWPH), Trulieve (CSE: TRUL) (OTC: TCNNF), Harvest Health & Recreation (CSE: HARV) (OTC: HRVSF), Tilray (NASDAQ: TLRY), Marimed, and Charlotte’s Web (TSX: CWEB) (OTC: CWBHF). GW Pharma blew away expectations on the strength of Epidiolex and moved to the top of the list. Trulieve also beat expectations and continues to produce very strong operating margins. The adjusted operating profit is substantially higher than any other company, reflecting focus and its leadership in Florida. The company, which had boosted its full year outlook last quarter, maintained its guidance for revenue and adjusted EBITDA margins.

Harvest, which had pre-announced, left little to the imagination but showed strong growth in top-line from the prior quarter at 38%. The company stuck to its guidance for the year, but it suggested that delays in Pennsylvania and Florida will make the ramp steeper than it had expected. Tilray beat the revenue expectations, with the addition of a full quarter of Manitoba Harvest Sales helping.Adjusted operating earnings worsened only slightly. Marimed catapulted to the list, but the sustainability of the revenue growth is very unlikely. The company’s big jump in revenue was almost wholly due to what is a financing transaction with a related-party. Specifically, it purchased seeds and sold them at a mark-up, with payment not expected for several months following its harvest and sale. Charlotte’s Web bounced back from a recent slowdown in sequential growth to 15%. Its 48% year-over-year growth fell from 131% in the prior quarter, something that applies to its peers as well. 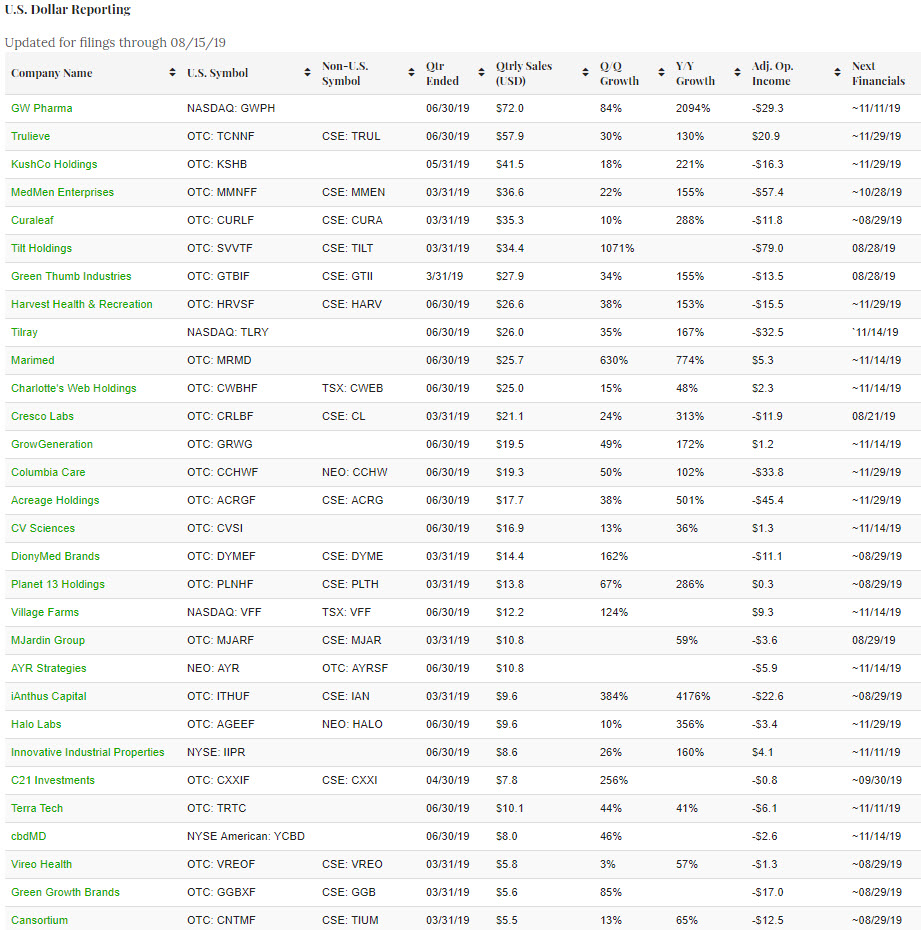 Over the balance of August, we will see the river go over the proverbial banks with the flood of financial reports. Among the companies reporting in the balance of August, Cresco Labs (CSE: CL) (OTC: CRLBF) this week and then more than 10 in the last week, including some of the larger revenue generators like TILT Holdings (CSE: TILT) (OTC: SVVTF), Green Thumb Industries (CSE: GTII) (OTC: GTBIF), Curaleaf (CSE: CURA) and (OTC: CURLF). According to Sentieo, Curaleaf is expected to report revenue of about $52 million, up almost 50% from last quarter. Positively, investors will appreciate if it exceeds $57.9 million (look at the table near the top!), but we think there is a very big risk that the company will reduce its guidance of $400 million for the year (the consensus is $375 million) due to delays in Massachusetts as well as other pending deals likely not closing as quickly as the company anticipated.

Of the companies that report in Canadian dollars, six companies filed financials, including those above approximately CAD$27 million (effectively US$20 million, including Canopy Growth (TSX: WEED) (NYSE: CGC), MediPharm Labs (TSX: LABS) (OTC: MEDIF), and Aphria (TSX: APHA), (NYSE: APHA).The market didn’t like the Canopy Growth report, which included a big miss and organic growth of almost -14% and a weak improvement in adjusted operating income and gross margin. Investors also reacted most likely to the net loss of over $1 billion, though much of this was due to resetting of terms on the Constellation Brands warrants. MediPharm Labs continued very strong revenue growth in its third quarter of reporting, with positive adjusted operating income, illustrating the strength of its focused and scalable business model. Investors loved the Aphria report, with sales of cannbis-related products growing 85% from the prior quarter. Its adjusted operating income improved substantially but was still in excess of its cannabis revenue. Aphria beat expectations because they provided guidance two-thirds of the way through the quarter on their last call for revenue to similar to the prior quarter. We expressed some concerns about the way they characterized their net income in our August 4th Newsletter. 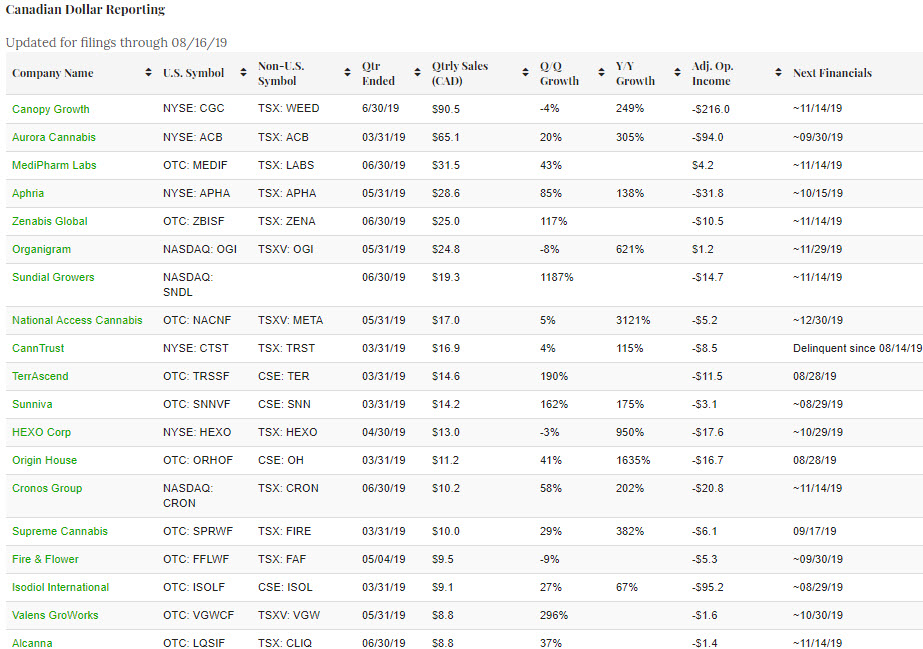 Over the balance of August, only TerrAscend (CSE: TER) (OTC: TRSSF) and Origin House (CSE: OH) (OTC: ORHOF are scheduled to report, though neither will be hosting a conference call.

Note that CannTrust (TSX: TRST) (NYSE: CTST) is delinquent on its Q2 report (will they EVER file it?), while Isodiol International (CSE: ISOL) (OTC: ISOLF) cured its delinquency in reporting its financials for the quarter and year ending March 31. Origin House pre-announced Q2 revenue of C$21 million, which represents 88% growth from the prior quarter.