If all goes as planned, the first legal sales of cannabis in Canada outside of its federal medical program could commence as soon as three months from now. The Senate is scheduled to vote on C-45, The Cannabis Act, on or before June 7th in the Third Reading, where it could be approved as-is or amended. If the Senate passes it with amendments, the more likely scenario, then the bill will go back to the House of Commons, with the two chambers needing to agree upon the final text. Upon agreement, C-45 will become law, and the government has suggested that legal sales could begin within a few months.

While many Canadians are ready to make legal cannabis purchases, it appears that the industry will be slow to ramp up. A new distribution network that won’t be fully ready and limited inventory in the vaults of the producers suggests that there will be a large initial imbalance between supply and demand. Of course, no one expects that the legal market will be able to fully replace the black market on day 1, and this can’t be the case in any event since legal cannabis suppliers won’t be able to sell products in the popular categories of edibles and vape pens.

While medical cannabis patients can purchase via the internet or phone from any of the approved licensed producers, sales of non-medical cannabis will be restricted to physical stores or province-specific government-run websites. Each province is responsible for overseeing distribution, and some will permit e-commerce, but consumers will not be able to buy directly from producers.

The provinces are pursuing different systems of distribution, ranging from a single government-run entity to schemes that include private retailers. Canada has a population of about 36.7 million, according to Statistics Canada, with the four largest provinces representing 31.7 million, or 86% of the population. Here are those top 4 provinces, ranked by population:

Here is the complete list of the remaining provinces and territories,  sorted alphabetically, and how they are going about distribution:

At this point, it seems unlikely that many points of sale will be open initially. Further, with the exception of Quebec, none of the other larger provinces have supply agreements in place.

While there are likely to be few stores open in the provinces, the bigger issue is that the supply of cannabis is likely to fall short of demand. With the exception of Canopy Growth, most LPs have very limited inventory, and recent levels of production suggest that inventories are likely to not grow substantially over the next few months, especially as some LPs meet medical patient and export demand. Aphria announced in April that it is shutting down its wholesaling to support inventory growth ahead of legalization.

In March, Health Canada reported inventories held by LPs as of 12/31 at almost 39 million grams of dried flower and just over 11 million grams in oils (measured on an equivalency basis), for a total of 50 million grams.  To put that in perspective, assuming 0.3 grams per joint, this would effectively amount to about four joints per Canadian per year.

Of course, there will be a range of consumption, with a very small proportion consuming more than a gram per day, every single day, and a larger population consuming less and less frequently. If one assumes the demand among 6% of the population to be 1 gram per day, another 6% consumes 5 grams per month and 15% consume just a gram per month, the annual demand based on 36 million residents would amount to 982 million grams in a mature market. This back-of-the-envelope calculation jibes with forecasts others have made, most recently New Frontier, which sees year-end 2018 demand at $1.7 billion  for the legal market (presumably about 170 million grams) and $8.7 billion for the overall market (about 870 million grams).

Because most of the large LPs are publicly-traded, with the exception of Tilray, we can see who has inventory to meet the initial demand.  Leading the pack by a wide distance is Canopy Growth, which reported overall inventory value, including accessories and supplies, as of 12/31 at $93.2 million, up over 100% from March 2017.  Canopy Growth will be providing an update at the end of June, when it reports its fiscal year ending March 31, and there will be another update in mid-August for the quarter ending June 30. 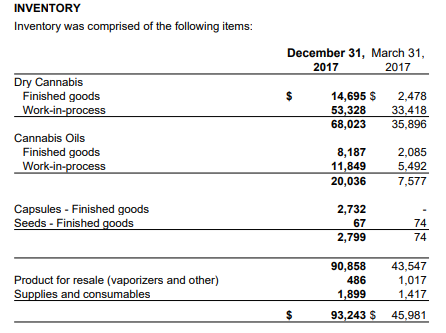 Assuming $3.50 per gram based on its last quarter’s financials, the reported inventory would amount to about 26 million grams, or about half of all the inventory in the system. To put this in perspective, just the Quebec supply agreement calls for 62 million grams, which exceeds the year-end level reported by Health Canada.

Unfortunately, not all of the LPs are reporting the size of their inventories in grams, with the three largest LPs in terms of the dollar amount of inventory silent on the issue. Given the projection of Canopy Growth representing likely 50% of all inventory, a reasonable guess is that there is likely that an updated estimate as of March 31st would suggest no more than 65 million grams or so of inventory across all the LPs, substantially below the overall likely initial market demand, especially considering how demand could be exceptionally high on the first day of legalization within a province. Given the large size of its supply agreement with Quebec, the low carrying value of inventory at Hydropothecary is particularly concerning.

Cannabis supply will be increasing as producers continue to scale up and add new facilities and as additional applicants become licensed. While Canada may look like Colorado back in 2014 when it moved beyond medical-only, it’s important to remember that there are relatively few large-scale cannabis producers in Canada today, and it will likely take time for even these to fully ramp up their production. Investors should monitor the upcoming reports from Canopy Growth, Hydropothecary and MedReleaf in June to reassess the near-term outlook for available cannabis, but it seems clear that Canadian cannabis stores will likely struggle initially with stocking levels.

This article was adapted from one I posted originally for subscribers at 420 Investor in the May edition of the monthly newsletter. Subscribe to 420 Investor to gain an edge staying on top of the most promising publicly-traded cannabis stocks.