This is a copy of the August 12th edition of our weekly Newsletter, which we have been publishing since October, 2015.

GW Pharma (NASDAQ: GWPH) made history earlier this summer gaining FDA approval of Epidiolex, the first pharmaceutical derived from cannabis to hit that milestone, yet its stock has sold off since the approval, extending its correction from the all-time highs the stock had hit in advance of the approval this week before bouncing after the earnings call Wednesday. GWPH is up only 2% in 2018 despite the FDA approval, lagging the overall biotech market, as measured by the S&P Biotech ETF (NYSEARCA: XBI): 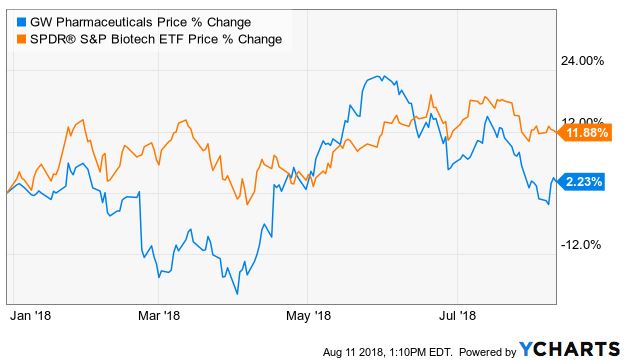 Investors should of course look at various time-frames when assessing relative performance, but GWPH has essentially tracked the ETF over the past year as well. In fact, over the last three years, it has only slightly outperformed the ETF. The stock has gained just 26%, trailing the S&P 500 price return of approximately 35%.

Even though the company has made so much progress and is on the cusp of launching a drug that analysts think could reach sales in excess of $1 billion within a few years, the stock still has had a lackluster performance, especially recently. We believe that part of the problem is that investors were likely overly enthusiastic years ago when the stock ran from $9 to $111 in less than 12 months after its NASDAQ IPO, and, while clearly the path from clinical development to FDA approval was remarkably short, it was longer than many had expected at the beginning of 2017. Still, there are several issues that seem to have created some doubt about the prospects for Epidiolex, including reimbursement and potential competition.

This week, the company revealed for the first time the pricing of Epidiolex, which was first reported by New Cannabis Ventures and is expected to sell for $32,500 per year on average, a range that most analysts had expected, leaving it priced in line with other epilepsy pharmaceuticals. Others have viewed the price as so high that patients may turn to over-the-counter CBD, but this may be a naive view. First, the out-of-pocket cost will be substantially lower, as most patients will have insurance coverage. Second, even without reimbursement, the pricing difference would not be substantially higher than alternative sources of CBD. Third, many doctors and patients will take comfort in the FDA regulation of the product. We think that the commercial insurance companies are likely to cover Epidiolex, but GW Pharma still hasn’t reported any contracts. We expect that once the drug is launched, it will finalize those negotiations.

Additionally, another drug developer targeting the same patient market as GW Pharma, Zogenix (NASDAQ: ZGNX), isn’t far behind with its own promising drug that uses fenfluramine and not cannabinoids. Epilepsy treatment hasn’t seen a lot of innovation, and patients tend to take many different drugs to treat seizures. Both GW Pharma and Zogenix have publicly stated that they don’t see each other as impeding their own potential success.

Perhaps more important than the reimbursement and competition issues, though, we think many investors didn’t appreciate something that the company, in our view, had communicated quite clearly: Epidiolex can’t be sold until the DEA reschedules it. The DEA has up to 90 days and typically takes this full amount of time. On the conference call, GW Pharma management reiterated that it expects Epidiolex to be scheduled by late September. We continue to see a great deal of confusion on this issue, as many seem to believe that the DEA will have to reschedule cannabis or CBD, something that would, if true, diminish the likelihood of Epidiolex being rescheduled, but this is not the case.

We see the cautious investor sentiment as likely creating a good entry into the name over the balance of the year if not already. Finalization of DEA scheduling and insurance coverage negotiations will likely lead to some improvement, though we expect that investors will probably fret about the rate of uptake once the company commences sales. On the conference call, management displayed a lot of confidence in its go-to-market strategy, but it was careful to convey that it could take some time to ramp up.

The singular focus on Epidiolex is understandable, but we think it may be obscuring the company’s tremendous intellectual property and a robust pipeline. Investors that are interested in staying on top of the evolving outlook for GW Pharma should consider joining the 420 Investor community.

Cannabis extracts and infused products are the fastest growing parts of the cannabis sector, but this is an area where operators struggle with how to optimize the technology they use to create their products most efficiently and cost-effectively.

We have seen a lot of interest in the guest posts that Green Mill Supercritical has shared at New Cannabis Ventures over the past year, and we invite our readers to learn more about this Pittsburgh-based manufacturer of CO2 extraction systems that is rapidly winning over some of the leading cannabis companies in the industry with its technology and service offering.

To learn more, visit the company’s page on New Cannabis Ventures and click the green “Get More Info” button.