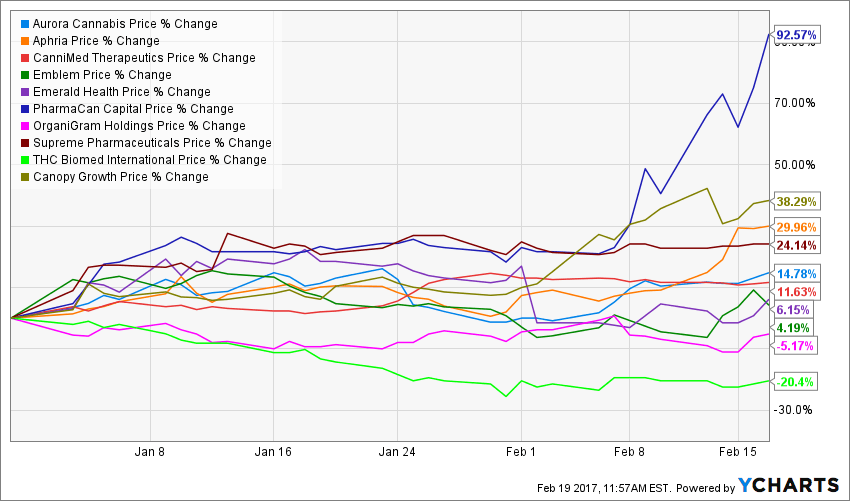 Interest in the Canadian LPs has been fueled by anticipation of the country becoming the first G-7 nation to legalize cannabis for adult-use. The next milestone will be the tabling of legislation, which is expected to take place in the Spring. The sector has posted gains in almost every month since July, though it experienced a sharp mid-month reversal in November that was followed in December by the only monthly decline since May. During December, the long-awaited Task Force Report was released to the public, a communication that proved to be a sell-the-news event.

Amidst the optimism, the 10 LPs have continued to aggressively raise capital to build out production capacity. Since Justin Trudeau was elected Prime Minister in October 2015, the publicly-traded LPs have raised more than C$700mm, and this doesn’t include the subsequent exercise of warrants. So far in 2017, the total is almost C$155mm. The shaded transactions have not yet closed: 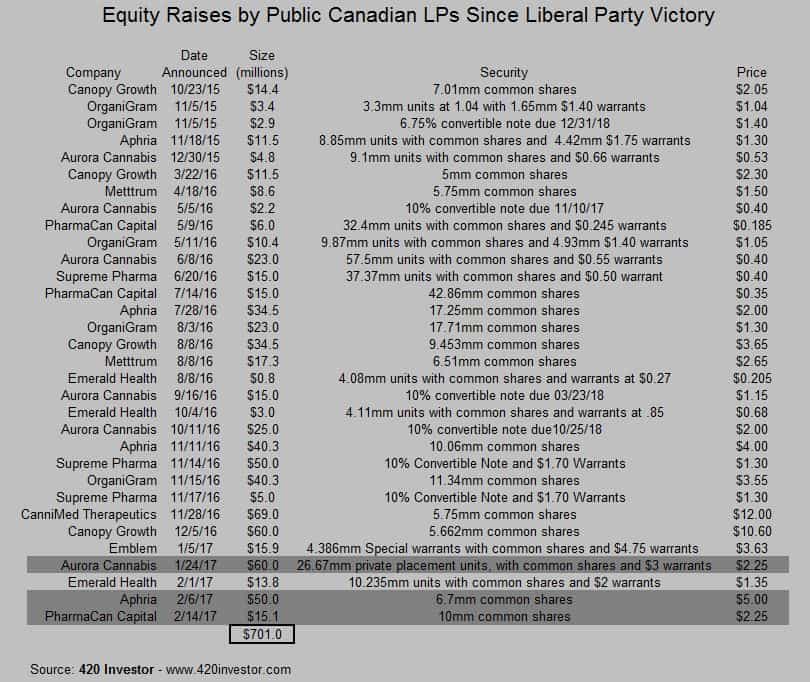 Here are how all 10 of the publicly-traded LPs have performed over the past year (or since-inception in the case of the two that debuted in December), by ticker in alphabetical order. 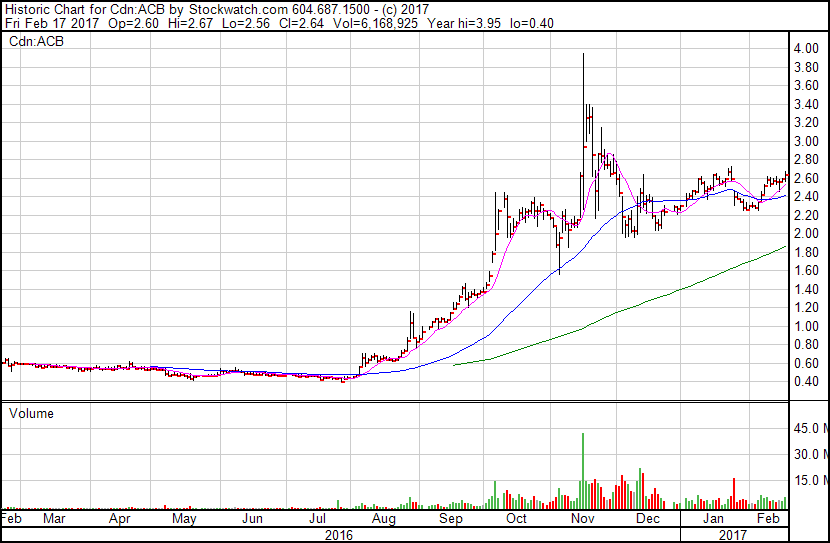 Aurora Cannabis (TSXV: ACB) (OTC: ACBFF), up 14.8% YTD, pulled back in January when it announced its $60mm private placement bought deal at $2.25 that is expected to close on February 23rd. The company, which received permission from Health Canada to sell cannabis oils last month, is building a second facility in Alberta that it expects to produce over 100mm grams annually at capacity. Aurora Cannabis added over 12K patients in 2016. CEO Terry Booth has forecast FY17-Q2 cash flow to be close to breakeven. The company will report its financials by March 1st. 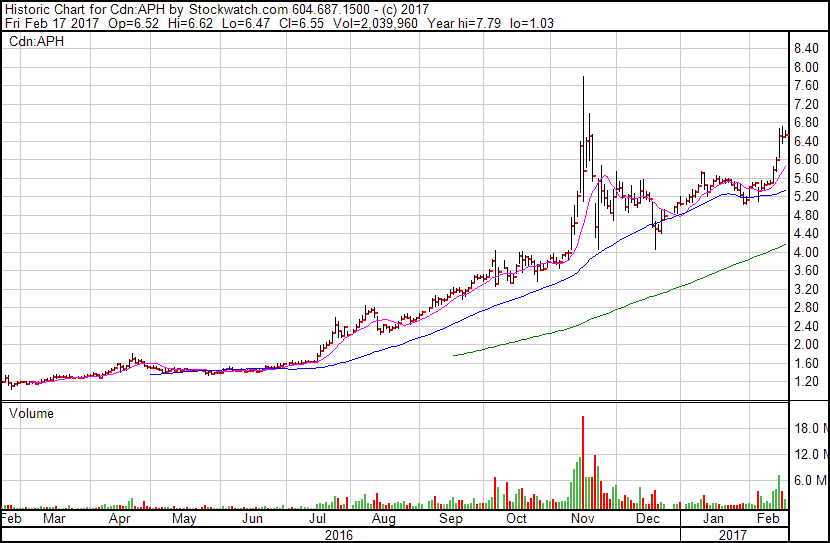 Aphria (TSXV: APH) (OTC: APHQF), up 30% YTD, announced that its Board of Directors approved “Part IV” of its expansion, a project that will cost $137mm and will leave the company with 1mm square feet of greenhouse space that it expects will produce 70mm grams annually at capacity. The company, which will be uplisting to the TSX by the end of April, priced a $50mm bought deal at $5 in a transaction that is expected to close on February 24th. The company’s FY17-Q3 ends on February 28th. 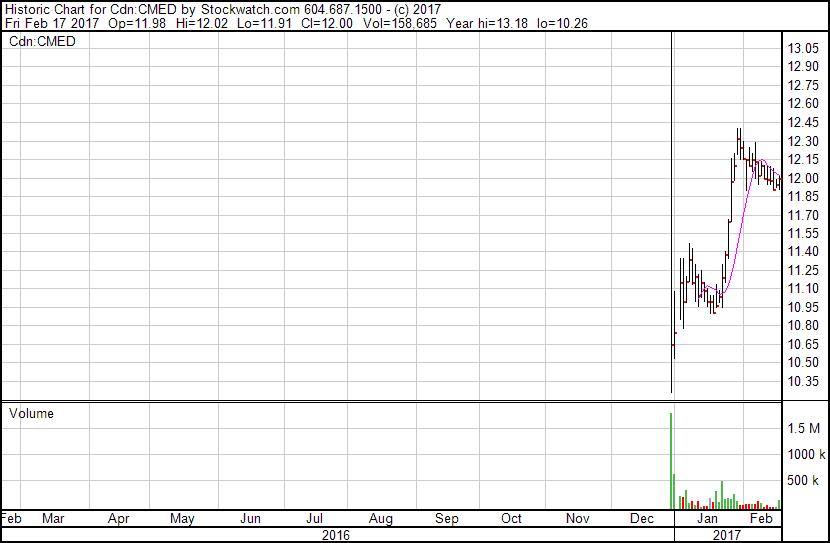 CanniMed Therapeutics (TSX: CMED) (OTC: CMMDF), up 11.6% YTD, priced its IPO at $12 in late December. After a rough start, the stock recovered initial losses, allowing the underwriters to exercise the over-allotment option and boosting the total deal to $69mm. The company, which earlier this month announced a clinical trial to study two of its oils in the treatment of MS-induced neuropathic pain, will be reporting its fiscal Q4 ending 10/31/16 on February 24th before the market opens, and its FY17-Q1 report is due by mid-March. 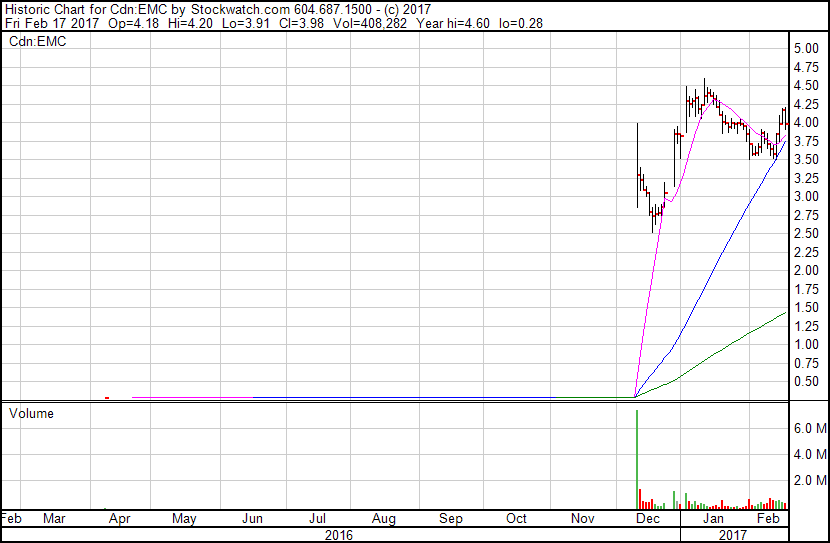 Emblem Corp. (TSXV: EMH) (OTC: EMMBF), up 4.2% YTD, posted a new high early in the year before announcing a capital raise, which it ultimately increased in size to C$13.82mm. Some of the pressure on the stock may have been related as well to an innovative program the company implemented to allow holders of its locked-up shares from prior capital raises to sell shares in a private market transaction. The company, which received permission from Health Canada to produce cannabis oils in mid-December, will report its year-end quarter ending 12/31 by May 1st. 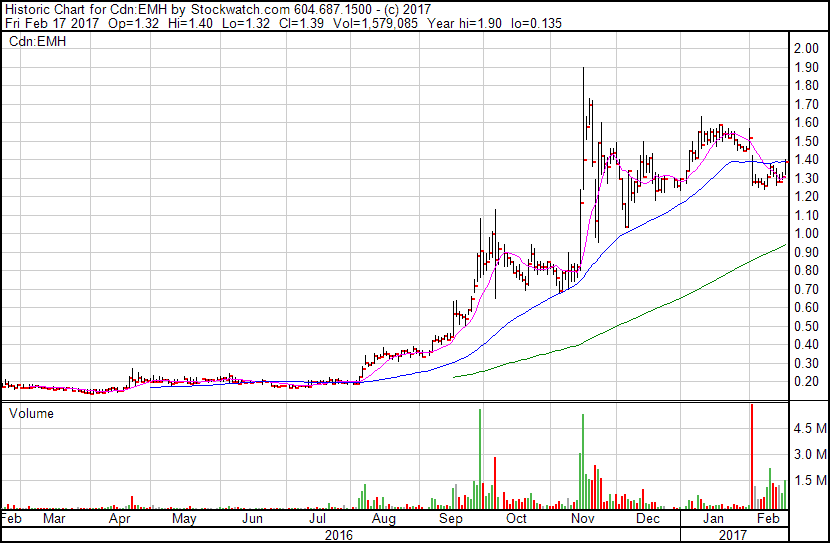 Emerald Health (TSXV: EMH) (OTC: TBQBF), up 6.2% YTD, has pulled back from January highs following a capital raise that was increased in size, with the company raising $13.8mm by selling units at C$1.35, which included a common share and a 1/2 warrant to to buy a share at C$2.00. The company is using the proceeds to build a modular hybrid greenhouse growing facility with 50,000 square feet of production space, the first phase of a project to develop 32 acres in the Vancouver area. Emerald’s year-end financials are due by May 1st. 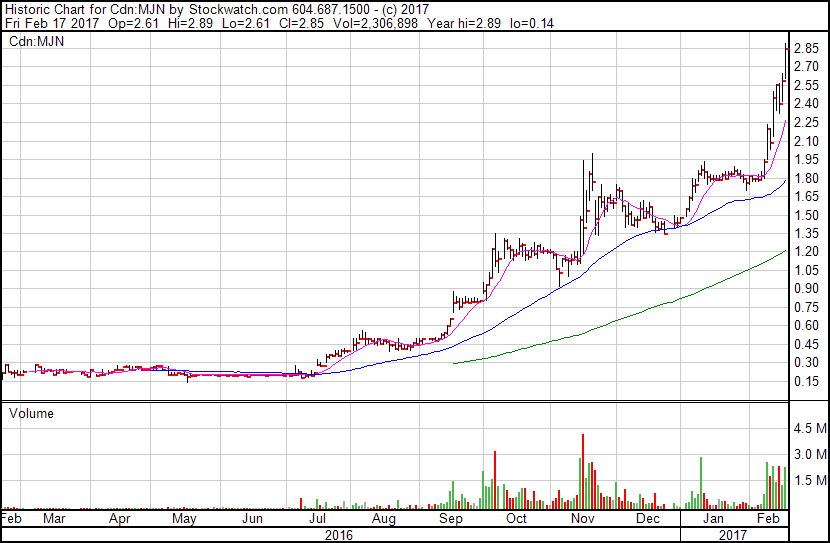 PharmaCan Capital (TSXV: MJN) (OTC: PRMCF), which is doing business as Cronos Group and is up 92.6% YTD, priced a $15mm bought deal at $2.25 that is expected to close on March 9th. The LP’s stock is the only one to exceed the prior highs set in November. The company’s wholly-owned subsidiary, In The Zone, recently received approval from Health Canada to sell, while Peace Naturals, its other wholly-owned subsidiary, is poised to benefit from the recent medical marijuana legalization in Germany by virtue of its export relationship with Pedanios GmbH. The company’s year-end financials are due by May 1st. 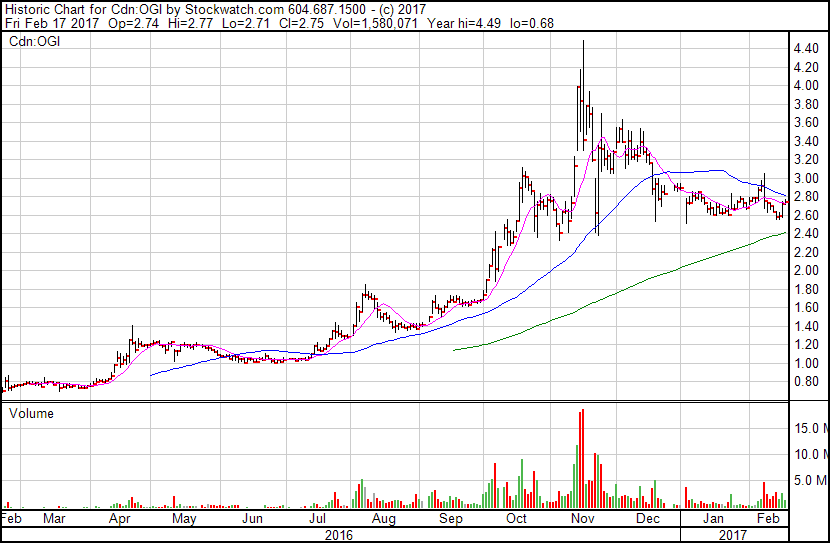 Organigram (TSXV: OGI) (OTC: OGRMF), down 5.2% YTD, has struggled since first announcing on December 30th its recall related to pesticides . ECOCERT suspended the use of the its organic certification, and the company is subject to mandated testing by Health Canada, which has recently implemented a random testing process for all of the LPs. Despite the near-term challenges of dealing with the quality control issues which have led to the company implementing new enhanced testing protocols, the company has been moving forward in other areas, including the hiring of a Director of Edibles & Extraction and a Chief Legal Officer and the acquisition of adjacent land in Moncton to enable the growth of its extraction business. Organigram’s FY17-Q2 financials are due by May 1st. 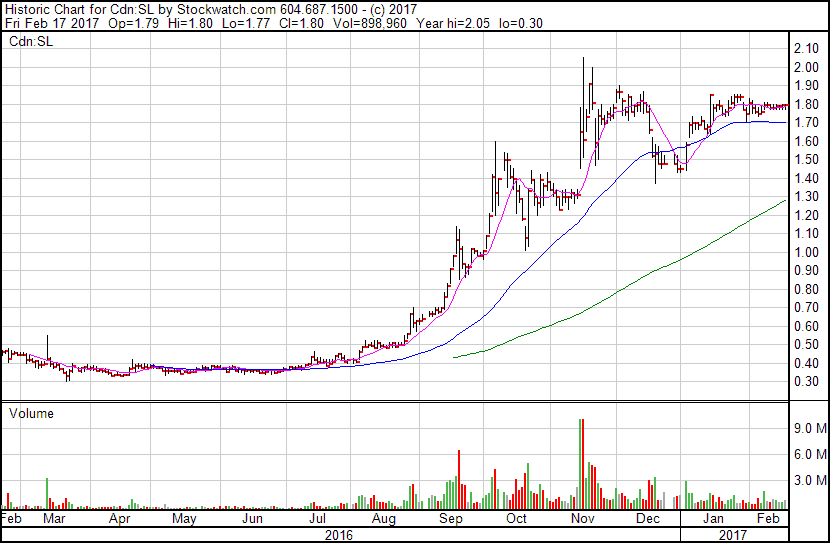 Supreme Pharma (CSE: SL) (OTC: SPRWF), up 24.1% YTD, is the one publicly-traded LP that hasn’t yet been permitted to sell. The company, which received its license to cultivate almost a year ago at its 7 Acres facility, has a differentiated business model that is limited to solely wholesale. Supreme’s financials for its FY17-Q2 ending 12/31 are due by March 1st. 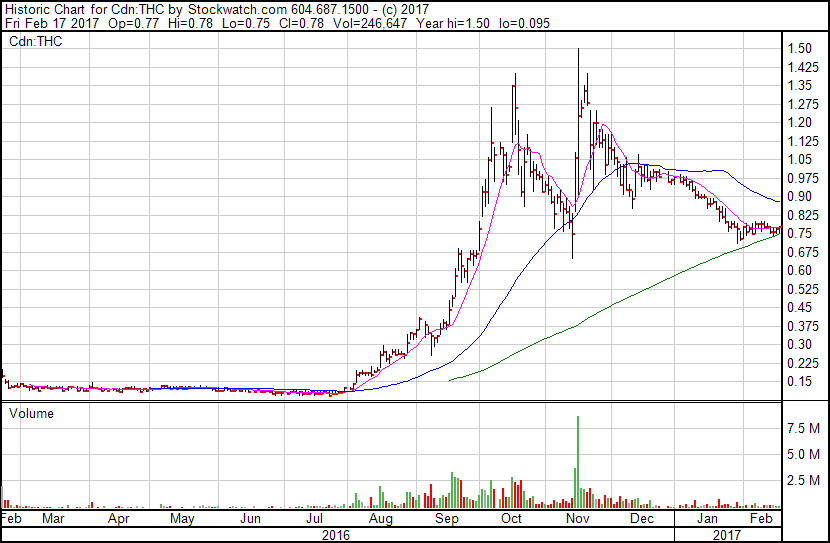 THC BioMed (CSE: THC) (OTC: THCBF), down 20.4% YTD, has lost 50% of its value from the peak in November. The company, which recently restated its financials for the past year and the subsequent quarter, signed a definitive agreement to acquire Clone Shippers, following an LOI announced on September 29th. THC BioMed will report its FY17-Q2 ending 1/31 by April 3rd. 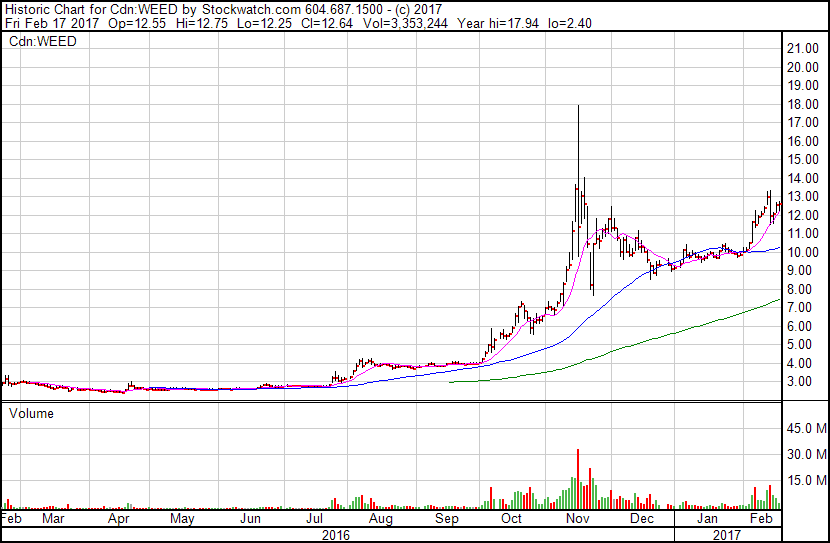 Canopy Growth (TSX: WEED) (OTC: TWMJF), up 38.3% YTD, is already having a busy year. In addition to closing the Mettrum acquisition, which leaves it with approximately 50K patients, it is preparing to submit an application to produce in Germany following the finalization of the program’s details over the next month or two. CEO Bruce Linton said on the recent conference call that the adoption of the company’s new ticker, with the change from CGC to WEED, attracted substantial attention worldwide and likely contributed to the recent move. Despite a revenue shortfall in FY17-Q3 due to supply constraints that were addressed in early February, the stock remains the second best performer among LPs so far in 2017. Canopy Growth will report its FY17-Q4 ending 3/31 by June 29th.

Health Canada has issued 38 licenses held by 30 separate entities, as Canopy Growth holds seven separate licences (in the process of divesting one), CanniMed Therapeutics holds two and Pharmacan Capital holds two. While there are currently 10 LPs that trade publicly in Canada, the number will soon increase. United Greeneries, which is part of publicly-traded MMJ Phytotech (ASX: MMJ) is in the process of listing in Canada via spin-out. ABcann, CannTrust, Hydropothecary, MariCann, The Green Organic Dutchman and WeedMD have all announced plants to go public. A B Labs has partially sold itself to publicly-traded Invictus Health (CSE: IMH) (OTC: IVITF).

Canada is rapidly becoming a global leader in the cannabis industry. Rising stock prices and large capital raises suggest strong investor demand. If you are following the sector, take advantage of our Canadian cannabis licensed producer resource page that allows readers to investigate the rules, data and companies approved by Health Canada.