28 companies currently qualify for inclusion, with 15 filing in U.S dollars and 13 in the Canadian currency. Since our last report, we added Cannex Capital (CSE: CNNX) (OTC: CNXXF). We note that two companies likely qualify but can’t be included at this time due to their not providing quarterly data yet, Curaleaf (CSE: CURA) and Elixinol Global (ASX: EXL) (OTC: ELLXF). We expect to be adding several additional companies over the balance of 2018 as existing public companies continue to ramp up sales and as others begin to trade publicly.

MedMen Enterprises (CSE: MMEN) (OTC: MMNFF) was one of two companies reporting financials in U.S. dollars that we updated in October, with the June fiscal year-end quarter results pushing it to second place among companies reporting in U.S. dollars. Sales of $20.6 million grew 1317% and generated an operating loss of $66 million. Cannex Capital reported earlier this month that it generated revenue of $3.4 million in the company’s fiscal Q1 ending July 31st, with adjusted EBITDA of $1.78 million. About 2/3 of the revenue can be attributed to its real estate operations and the balance to supplies. 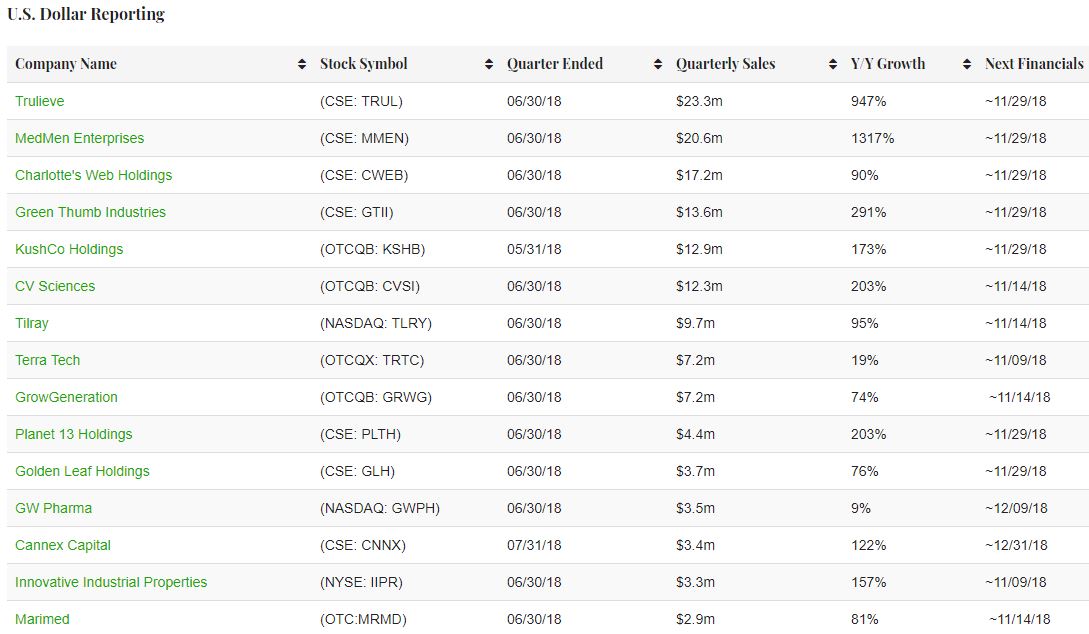 In November, we will get reports from twelve of the fifteen companies, with six due before mid-month, including CV Sciences (OTC: CVSI), GrowGeneration (OTC: GRWG), Innovative Industrial Properties (NYSE: IIPR), Marimed (OTC: MRMD), Terra Tech (OTC: TRTC) and Tilray (NASDAQ: TLRY), which has provided guidance that its sales will be between $10 million and $10.5 million. We also expect to add Medicine Man Technologies (OTC: MDCL) when it reports, as it has pre-announced sales of at least $4.5 million. KushCo Holdings (OTC: KSHB), which pre-announced its Q4 sales at about $19 million in September, which would represent 120% growth from year-ago sales, is expected to file by the end of November, along with five others, including Charlotte’s Web (CSE: CWEB) (OTC: CWBHF), Golden Leaf Holdings (CSE: GLH) (OTC: GLDFF), Green Thumb Industries (CSE: GTII) (OTC: GTBIF), MedMen, Planet 13 Holdings (CSE: PLTH) (OTC: PLNHF) and Trulieve (CSE: TRUL) (OTC: TCNNF) 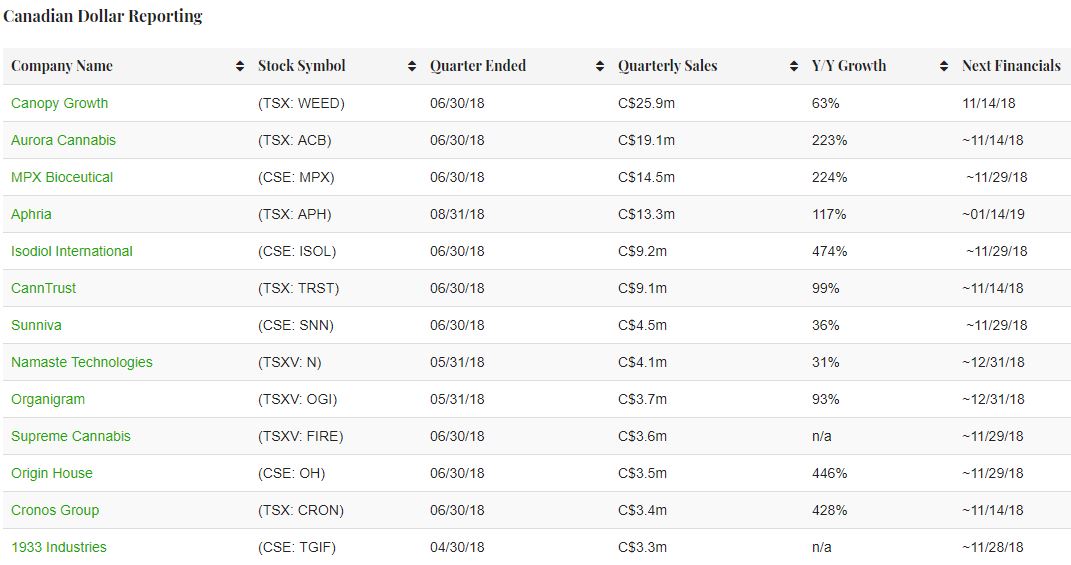