This is a copy of the October 7th edition of our weekly Newsletter, which we have been publishing since October, 2015.

With fewer than two weeks until the legal consumer market opens in Canada, one topic that we feel isn’t being widely discussed is the new entrant into the market, the retailer. For the past four and a half years, medical cannabis has been distributed entirely by LPs directly to patients, so, for the first time, Canadians will be able to go into a physical store, similar to the experience in the United States.

Each province has a different approach, with some, like Quebec, allowing the sale of cannabis products only at state-run stores. Several other provinces, like Alberta, Manitoba and eventually Ontario, will operate with private retailers, though online stores will be run by the provinces. British Columbia will employ a hybrid model.

Day one is likely to disappoint the media. Ontario will not have any physical distribution until April. Alberta, one of the most progressive provinces with respect to the private retail model, has issued only 17 licenses. The smaller Manitoba appears to be further along, but the reality is that there won’t be very many stores open on October 17th across Canada, and this perhaps explains why there has been so little focus on the companies that are positioning to build retail chains across the country.

We are tracking some of the early front-runners, which include public companies Alcanna (TSX: CLIQ) (OTC: LQSIF), which was formerly Liquor Stores North America, National Access Cannabis (TSXV: META) (OTC: NACNF), which is extending upon its core clinic business, Choom (CSE: CHOO) (OTC: CHOOF) and newly public Inner Spirit Holdings (CSE: ISH) (OTC: INSHF), which is employing a franchise model. Cronos Group (TSX: CRON) (NASDAQ: CRON) and MedMen (CSE: MMEN) (OTC: MMNFF) announced a joint venture as well, though there hasn’t been a public update. We interviewed the CEO of Inner Spirit last month, and we will be conducting an interview this week with the CEO of National Access Cannabis.

We are also tracking private companies, like Compass Cannabis, which has partnered with Colorado-based Starbuds to create Starbuds Canada, and Fire & Flower, which has announced plans to trade publicly and has attracted investment from several LPs. We interviewed the CEO of Compass Cannabis last month, and we plan to focus more on this evolving sub-sector.

We noted the lack of media coverage, and, with no stores officially open yet, perhaps it’s not surprising. Based on the stock charts of the publicly-traded companies, it appears that there is very limited interest from investors at this time as well, despite the strong market for LPs. Since 8/1, the entire group has substantially lagged the Canadian Cannabis LP Index, which has increased 58.6%. 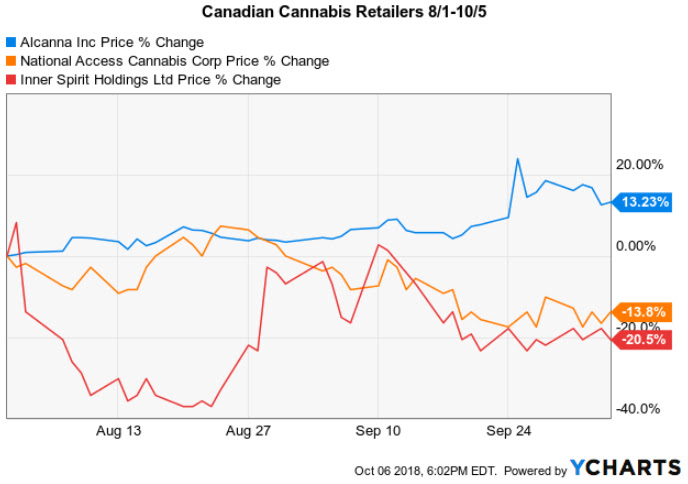 We think readers would be wise to devote some time to learning about the retailers, as we expect investor interest to ramp up in the coming weeks. Given the limitations imposed on LPs by several provinces, especially Ontario, which plans to limit them to no more than one physical store, we expect that the adult consumer market in Canada will allow substantial value creation for the retailers.

Xtraction Services, which offers turn-key extraction-as-a-service to cultivators using state-of-the-art cannabis and hemp extraction equipment and has raised over $8 million to date, is operating in multiple states and pursuing expansion into other countries. The company offers proprietary equipment made available through a leasing program, greatly reducing the up-front capital investment, and it takes responsibility for maintenance and service of the equipment. To learn more, visit the company’s page on NCV and click the green Get More Info button.

Many of our readers looking to gain an edge in investing in cannabis stocks turn to Alan’s 420 Investor, which recently celebrated its five year anniversary. The service includes insight, analysis, model portfolios with trade-alerts, weekly interactive chats, ten videos each week that go over technical analysis and key information, weekly and monthly market summaries and a Forum filled with user-generated content. Subscribers count on Alan to keep them in the loop with real-time updates and analysis on important info regarding the sector and its publicly-traded stocks. Find out why almost 1,700 people have rated the service an average of 4.6 out of 5 stars.