This is a copy of the January 27th edition of our weekly Newsletter, which we have been publishing since October 2015.

In late 2018, many new multi-state operators (MSOs) came public at the same time, raising hundreds of millions of capital in the process. Weak overall market conditions and a glut of new cannabis stocks along with disappointment over the Canadian legalization left most of these new issues deeply underwater. For instance, the highly anticipated Acreage Holdings priced a $119 million private placement at US$25 only to see its stock trading as low as US$12 in late December. Curaleaf Holdings traded as low as C$5.12 in early December after raising C$520 million at C$11.45 in October.

While Acreage Holdings and Curaleaf still trade below their last deal pricing, they have recovered substantially. Some of their peers, like Cresco Labs and Harvest Health & Recreation, have fully recovered, while others, like DionyMed Brands, Dixie Brands, Grown Rogue, MJardin Group, Rubicon Organics and TILT Holdings are still trading below the deal pricing. Green Growth Brands and Plus Products never traded below their deal pricing levels.

The professionally managed American Cannabis Operator Index, which debuted at the end of October, certainly reflected the overall sector weakness after running up initially, but it has recovered substantially:

We believe that investors may want to look past the poor performance in Q4 for these companies and remind everyone how poorly many of the Canadian LPs traded in their early days. This past week, Innovative Industrial Properties, the NYSE-listed cannabis REIT, traded to an all-time high near $60. It was less than 14 months ago that it finally traded above its $20 IPO price, reminding us that a poor initial reception doesn’t always doom a stock: 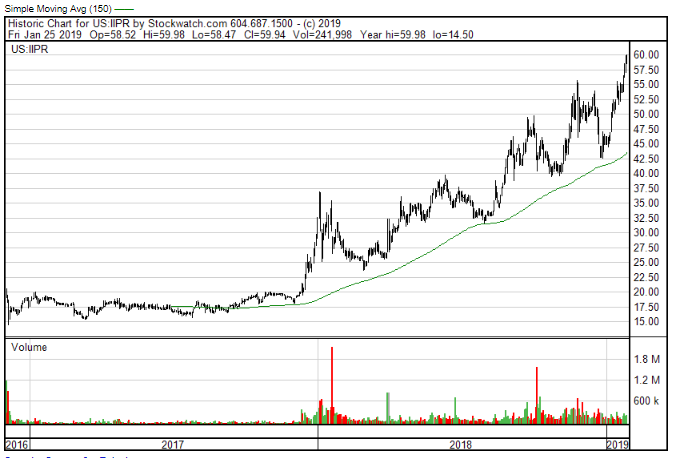 Over the next few months, many of these MSOs will be reporting substantial revenue for the December quarter. MedMen, for example, has already pre-announced sales in its Q2 that grew 40% from the prior quarter to almost $30 million, and we think investors will be intrigued by these financial reports potentially. In contrast to the Canadian LPs in 2014-2015, which were not yet scaling up, several of the U.S. cannabis companies are on track to generate more than $100 million in sales in 2019, and we think this business momentum will shorten the period of post-IPO blues.

Province Brands, an early-stage disruptive premium adult beverage company founded by Dooma Wendschuh and veteran entrepreneurs with extensive experience in the premium alcohol, legal medical and recreational cannabis industries, has a patent-pending process used to created the word’s first beer brewed using cannabis. Its first beer is brewed from hemp and contains alcohol, while its cannabis-derived beer, which is alcohol-free, will be introduced when Canada begins permitting cannabis edibles and beverages later this year.

To learn more about Province Brands, a client of NCV, visit the company’s page that we maintain on its behalf and click the green Get More Info button.