43 companies currently qualify for inclusion, with 27 filing in U.S dollars and 16 in the Canadian currency, which is down from 44 when we reported at the end of October due to one addition,  Canadian retailer Alcanna (TSX: CLIQ) (OTC: LQSIF), and the removal of Halo Labs (NEO: HALO) (OTC: AGEEF) and Terra Tech (OTC: TRTC), both of which saw revenue fall sequentially below the minimum required to qualify.

For companies that report in U.S. dollars, several have done so in the first half of November. GW Pharma (NASDAQ: GWPH) generated Q3 revenue of $91 million, which was slightly ahead of expectations and represented 26% growth over Q2. Helping to boost sales was $1.9 million of Epidyolex sales in Europe, the company’s first. KushCo Holdings (OTC: KSHB) exceeded expectations with revenue in its Q4 ending 8/31, with sales of $47 million growing 135% from year-ago levels. The company provided initial guidance  for its fiscal 2020, with revenue expected to exceed $230 million compared to FY19 revenue of $149 million. Tilray (NASDAQ: TLRY) generated cannabis revenue of $35.5 million, representing 36% sequential growth, as its operating loss narrowed significantly to $23.3 million. Charlotte’s Web (TSX: CWEB) (OTC: CWBHF) outperformed other CBD companies with flat sequential growth, with revenue of $25.1 million representing 42% growth from its Q3 a year ago. The industrial hemp CBD market has slowed substantially due to increased competition. Acreage Holdings (CSE: ACRG) (OTC: ACRGF) posted strong revenue growth at 26% sequentially, but its operating loss narrowed only slightly. Columbia Care (NEO: CCHW) (OTC: CCHWF) experienced 15% sequential growth in revenue as its adjusted operating loss declined by $5.3 million. GrowGeneration (OCT: GRWG) saw overall revenue expand 159% from a year ago, supported by same-store sales growth of 48% as it delivered a small operating profit. Several other companies reported revenue between $7.5 million and $20 million. 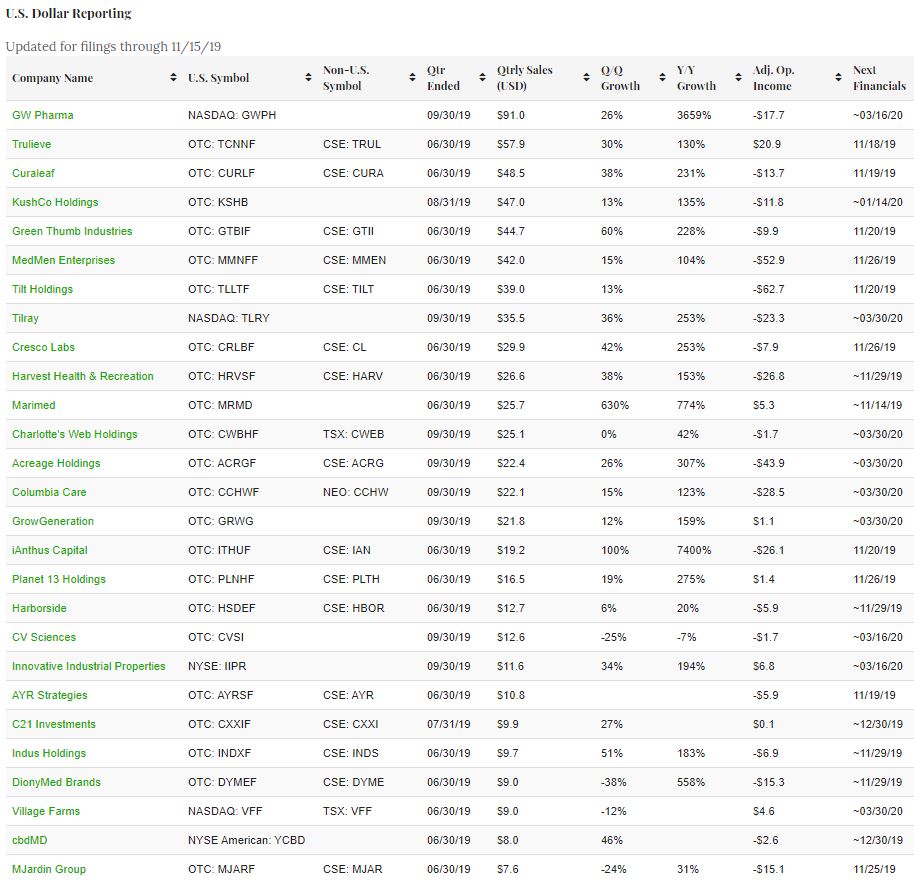 The balance of November will see several companies reporting, with most having already scheduled earnings calls, including the four MSOs that had the highest revenue in the June quarter. According to Sentieo, analysts project Trulieve (CSE: TRUL) (OTC: TCNNF) to report revenue of $66 million, which would represent 14% growth from the prior quarter. Curaleaf (CSE: CURA) (OTC: CURLF) could surpass Trulieve, as analysts project sales of almost $67 million, which would represent sequential growth of 37%, similar growth to what the company experienced in the prior quarter. GTI (CSE: GTII) (OTC: GTBIF) is expected to have generated over $61 million in revenue in Q3, representing growth of 37% sequentially. MedMen (CSE: MMEN) (OTC: MMNFF) is expected to have generated $47.8 million in its fiscal Q1, up 14% from the prior quarter.

Of the companies that report in Canadian dollars, the trends were quite mixed. Canopy Growth (TSX: WEED) (NYSE: CGC) regained the lead, but its revenue declined sharply from the prior quarter, as did that of Aurora Cannabis (TSX: ACB) (NYSE: ACB). Both companies, which saw operating losses expand from the prior quarter, cited lack of retail distribution as a key contributor to their financial results. Canopy Growth had been expected to report sales of C$117 million, while analysts had forecast C$96.7 million from Aurora Cannabis. MediPharm Labs (TSX: LABS) (OTC: MEDIF) generated Q3 sales of C$43.4 million, ahead of the C$42 million consensus and up 38% from Q2 as it generated a C$5.4 million operating profit. Sundial Growers (NASDAQ: SNDL) reported cannabis-related revenue of C$28 million, up 45% from the prior quarter, and generated an operating loss of C$7.2 million. 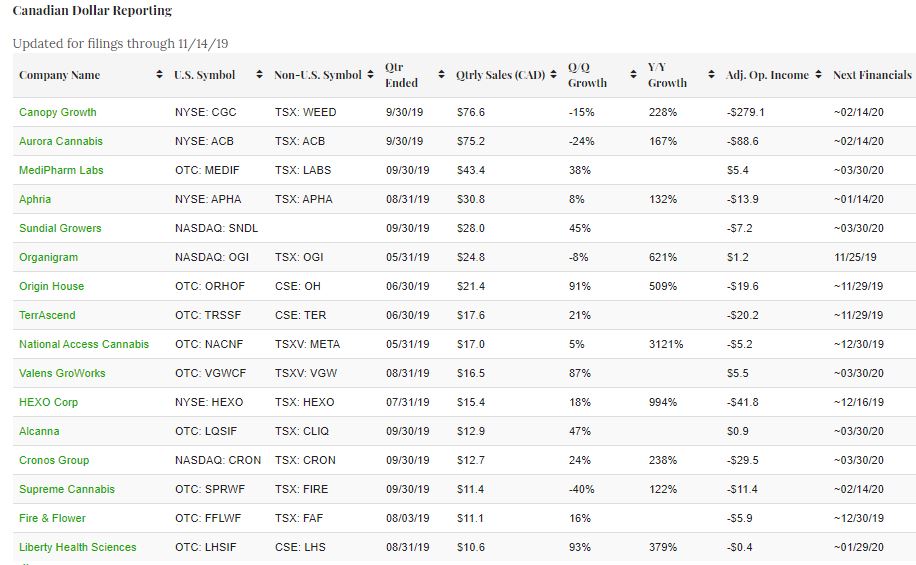 Most of the companies that report in Canadian dollars have already done so, but  a few more will report over the balance of the month, including Origin House (CSE: OH) (OTC: ORHOF) and TerrAscend (CSE: TER) (OTC: TRSSF), which pre-announced its revenue at approximately C$26 million, up 48% from Q2 but below expectations. Organigram (TSX: OGI) (NASDAQ: OGI) reports its fiscal Q4 ending in August on November 25th. The company had been expected to grow revenue sequentially by 21% to C$29.9 million, but it pre-announced a substantial short-fall at C$16.3 million, down 34% from the May quarter.