Due to the rapid growth in the cannabis industry, we raised the minimum to US$25 million (C$32 million) to qualify for what we now call the senior list and introduced a junior list with a minimum of US$12.5 million (C$16.0 million) in September. At the time of our last update in late January, 36 companies qualified for inclusion on the senior list, including 30 filing in U.S. dollars and 6 in the Canadian currency. The junior list now includes 13 reporting in U.S. dollars and 4 in Canadian dollars. On a combined basis, the Public Cannabis Company Revenue & Income Tracker includes 53 companies. There were no additions or deletions this month. We expect to add additional companies in the months ahead, and, due to pending or recently completed mergers, we anticipate some removals as well. We note that Intercure (TASE: INCR) (NASDAQ: INCR), which reports in the Israeli currency, qualifies for the junior list, but we haven’t yet added it due to its different reporting currency.

Since our last update, several companies have reported, including some of the largest by revenue. Scott’s Miracle-Gro (NYSE: SMG) reported its fiscal Q1, with sales in its Hawthorne Gardening unit plunging 38% from a year ago. The company had pre-announced the short-fall. Innovative Industrial Properties (NYSE: IIPR) exceeded revenue expectations. WM Technology (NASDAQ: MAPS) surprised to the upside in its Q4 and provided a revenue outlook ahead of expectations for 2022. It expects overall revenue of $255-265 million, up 32-37% from 2021. Turning Point Brands (NYSE: TPB) reported 14% growth compared to a year ago in its Zig-Zags unit during Q4. The company expects the unit to deliver revenue of $193-203 million in 2022 compared to $103 million in 2021. MedMen (CSE: MMEN) (OTC: MMNFF) reported its fiscal Q2 very quietly, filing the 10-Q but failing to issue a press release. Revenue fell 2% sequentially and rose just 20% from a year ago as the company reported an operating loss in excess of $25 million. 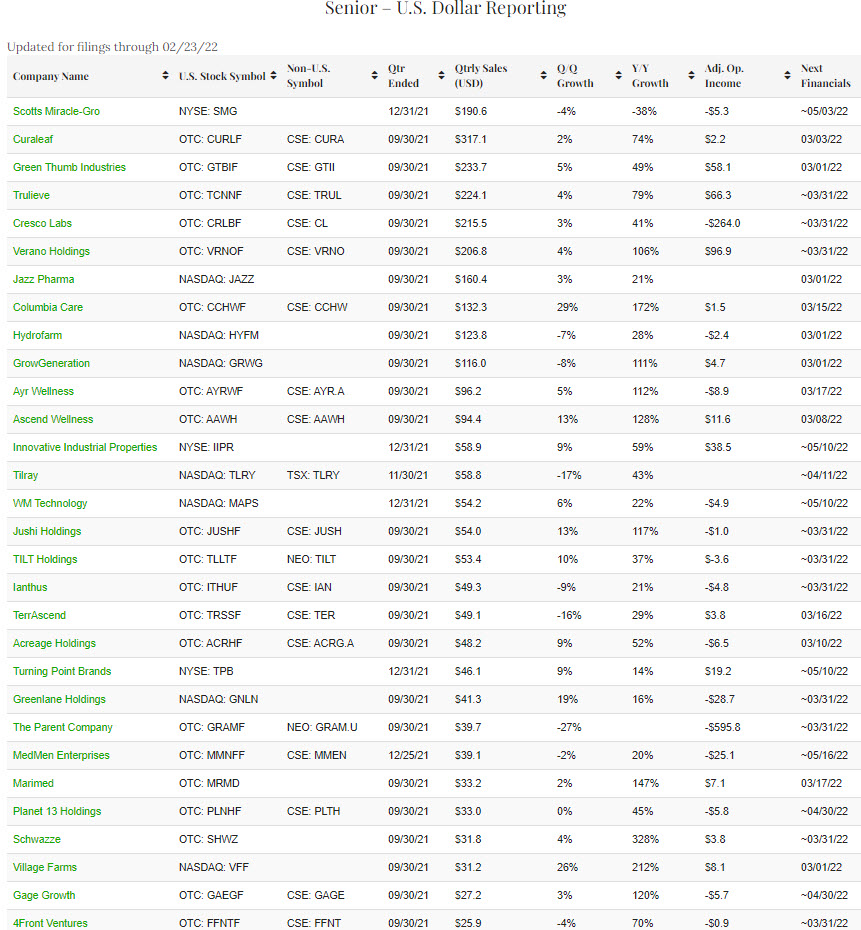 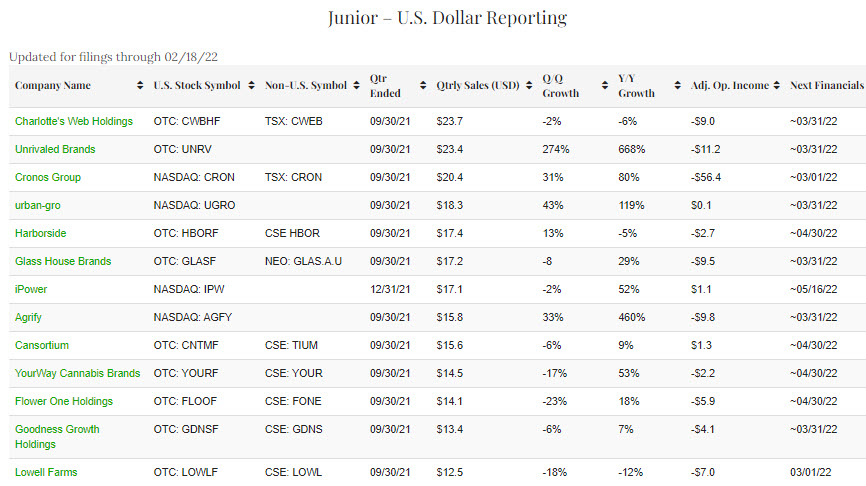 In February, Canopy Growth (TSX: WEED) (NASDAQ: CGC) and Aurora Cannabis (TSX: ACB) (NASDAQ: ACB) reported, both generally in line with expectations. Canopy Growth saw weakness in almost all of its segments in its fiscal Q3, but U.S. CBD and BioSteel helped offset it, with overall revenue declining 8% from a year ago. Aurora Cannabis experienced a 10% decline in revenue from a year ago during its fiscal Q2. Both companies saw substantial declines in adult-use sales in the Canadian market. 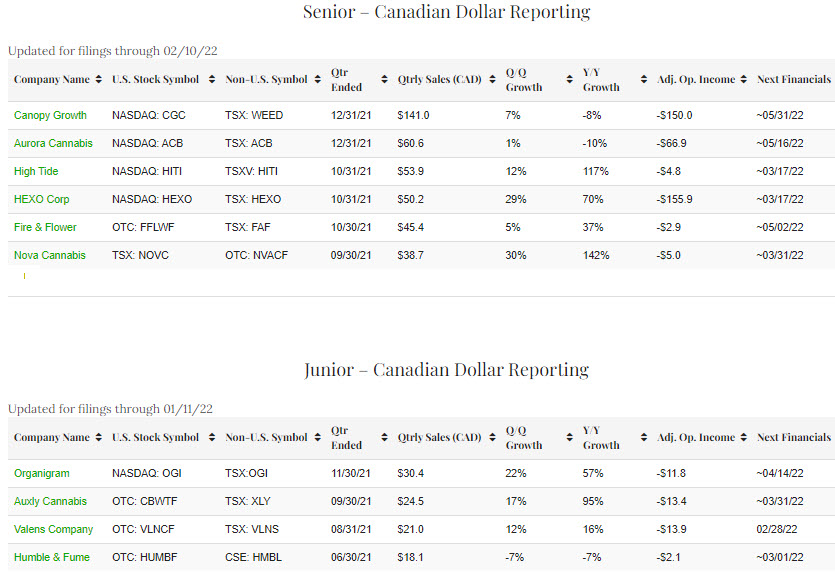 In the first half of March, Valens (TSX: VLNS) (NASDAQ: VLNS) and Humble & Fume (CSE: HMBL) (OTC: HUMBF) are reporting from the junior list. According to Sentieo, Valens is expected to have generated C$20.6 million revenue in its fiscal Q4 ending in October, up 29%.