We can’t say we are surprised by what’s going on, as we first explained in October why the Canadian cannabis operators would benefit from perceived opportunities in the United States. These companies trade on higher exchanges, and, even four months later, they continue to benefit from the media not understanding the material financial impact of more states legalizing.

News that Virginia is close to legalizing, for example, led media website Briefing, and others, to send out misleading alerts for Canadian LPs last Monday: “Virginia General Assembly passed bill to legalize recreational marijuana (MJ, TLRY, ACB, CGC, CRON, APHA).” Of course, none of these stocks have any sort of benefit from this news. Publicly traded Columbia Care and Jushi actually do, but traders got misinformed.

Since our newsletter in October, it has been simply remarkable how traders have run up the largest Canadian LPs far in excess of the returns of the leading American operators during this period that began two weeks before the elections: 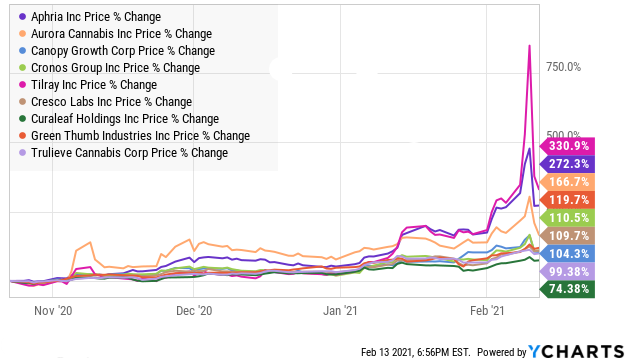 Tilray, Aphria and Aurora are all up more than the GTI, while Cronos Group is slightly ahead of Cresco. The worst Canadian LP among its largest companies in market capitalization, Canopy Growth, has performed better than Trulieve and Curaleaf. The top five LPs by market capitalization have returned on average 196.9% since October 23rd, while the four largest American operators by revenue, all of which have more revenue and are all profitable, have gained an average of 100.8%.

After the elections, we said that we think investors who are betting on the U.S. market to open soon to Canadian LPs are making a mistake. Since 11/13, the returns have been more balanced, with a big exception: Tilray and Aphria have gone parabolic, up 279% and 199% respectively. Looking at the remaining three largest LPs, they have returned 71.4% on average, while the four MSOs have returned an average of 73.1%.

Since the Georgia run-off elections, which flipped the Senate, we have heard from three leading Canadian LP CEOs during quarterly conference calls. Aphria’s Irwin Simon spoke in January about how he thinks it’s possible his company will be able to export Canadian cannabis to the U.S. Aurora’s Miguel Martin touted its experience as operating in other federally legal markets as giving it an edge in the U.S., suggesting the FDA is going to be involved in regulating federally legal cannabis. Canopy’s David Klein continues to suggest it will be in the U.S. THC market this year.

We continue to believe things will move slower, but we understand why the leaders of these companies with seemingly bloated market caps need to give their investors something positive to think about in the near-term. In our view, it’s very simple: The largest Canadian LPs will be able to enter the market as soon as NASDAQ and NYSE say they can do so without risking their listings. This would obviously be the case with legalization, but that is likely to take a long time due to the complexity of issues that it would entail, including taxation, interstate commerce and social equity. Passage of any legislation would require 60 votes in the Senate, which could be a challenge.

Short of legalization, though, it is possible Congress could move to give the major exchanges safe harbor to allow cannabis companies operating in the U.S. to list. While this might be viewed as positive for the big Canadian LPs, we think whatever benefits they might accrue are far surpassed by the impact it would have on leading MSOs.

Leading MSOs are already raising capital from institutional investors despite being disadvantaged with respect to the listing status, and the floodgates will open once they are able to move to the NYSE or NASDAQ. When that happens, the large Canadian LPs that trade on higher exchanges in the U.S. will lose one of the very few advantages they have right now. Despite the recent irrational price action in these companies, we continue to believe that the Canadian market is improving, and we are already seeing signs that some of the smaller operators are benefiting.

In the environment we envision, which is the continued rapid rollout in state legalization and a slow transition to federal legalization, American operators are already benefiting with little to no coverage from the media.

This week’s newsletter is brought to you by NRGene, a genomics company that provides turn-key solutions. 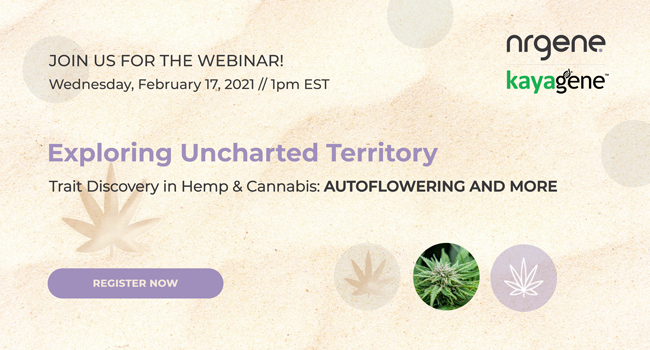 Diving into the cannabis genome, Dr. Barak Markus from NRGene will explore the challenges of working with this complex and under-researched crop. Dr. Christopher Hohn from Kayagene will present their cannabis breeding project, and, together, they will present results of a few successfully mapped key genes, including autoflowering trait. Join us to learn how trait discovery can help your business grow.