Earnings season kicked off this week for the sector, with several key companies, all on our Focus List and held by at least one model portfolio at premium subscription service 420 Investor and from a variety of sub-sectors, reporting financials for the quarter ending June 30th. Scheduled calls were from Canopy Growth, Green Thumb Industries, GrowGeneration, Innovative Industrial Properties and Scotts Miracle-Gro, and Hydrofarm pre-announced. GTI and Innovative Industrial Properties had reports that were above expectations, Canopy Growth was in line, and the others were worse than expected.

Canopy Growth’s fiscal Q1 revenue fell slightly from Q4, but the adjusted EBITDA was as expected. The challenge for investors was that the operating loss was massive at over C$1.8 billion. This large loss was due to an asset impairment charge in excess of $1.7 billion. The use of operating cash fell from a year ago, declining from C$166 million to C$141 million. The stock did fall 6.6%, but it held above recent lows and, for now, appears to be bottoming from the large loss in July. An early dip was followed by a rally: 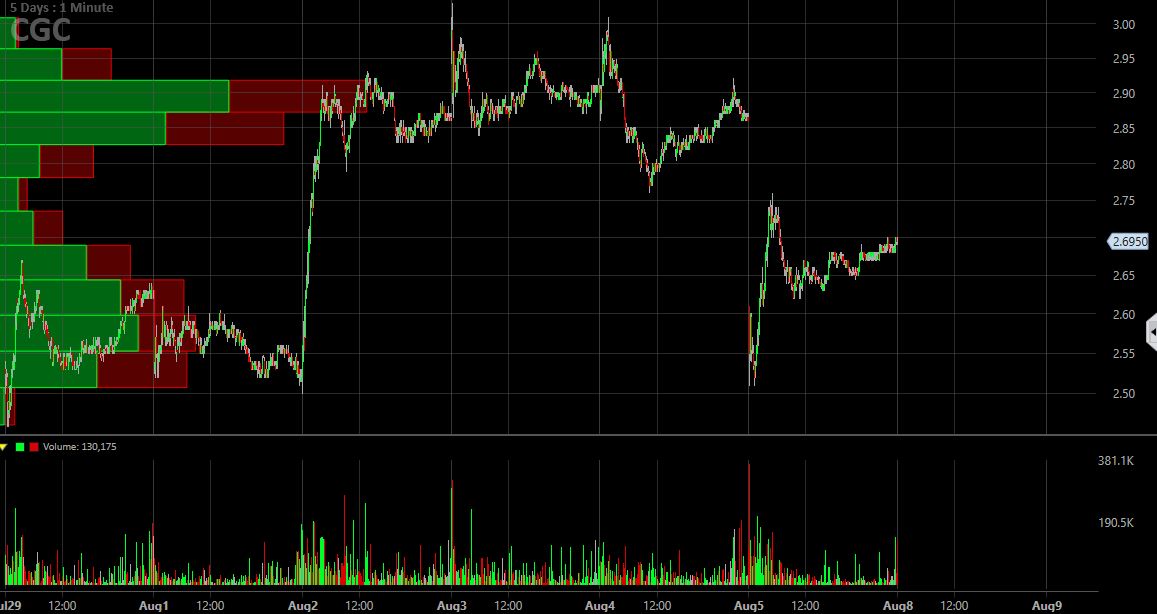 Green Thumb beat the expected revenue, growing 15% from a year ago in Q2, and its adjusted EBITDA was better than expected as well. The stock fell about 3% on Thursday, but it rallied over 6% on Friday as volume swelled. It closed near the high of the week: 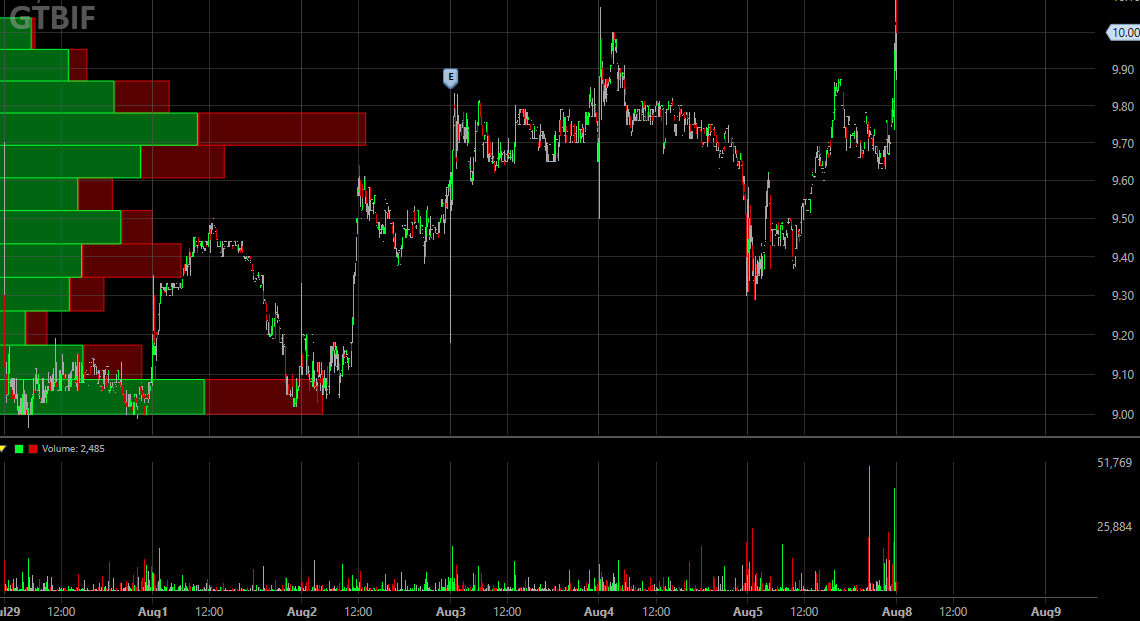 GrowGeneration reported much lower sales than expected for Q2 and also reduced its outlook for the full year. Investors were pounding the stock in after-hours and the pre-market, but the stock had a great day following the earnings release. It opened at 4.06, down about 12%, but it quickly rallied substantially. Trading as high as 5.13, the close at 4.85 was still up 5%. This was the strongest example of bulls stampeding quickly: 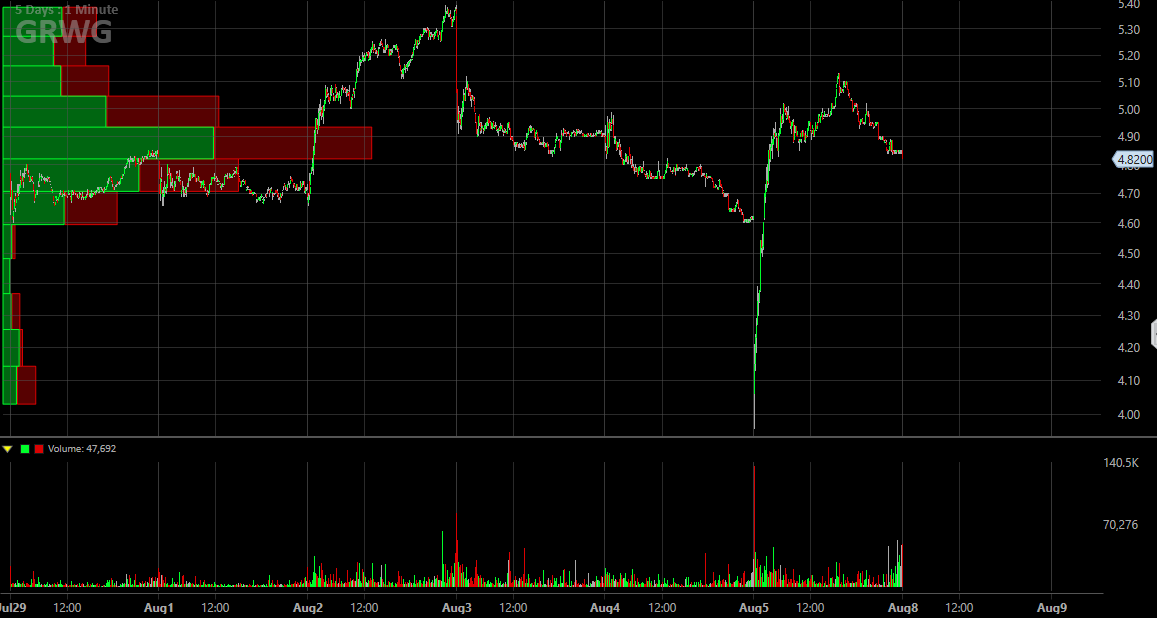 The pre-announcement of Q2 financials by Hydrofarm drained the stock, but it recovered sharply and quickly most of the loss. The bad news on Tuesday resulted in a new all-time low on Wednesday, but the stock lifted a lot right away. Still, the news has left the stock down more than 16% from where it closed Tuesday. The rally from the low to the close on Friday was an impressive 20.7%. Sellers sold, but buyers bough big: 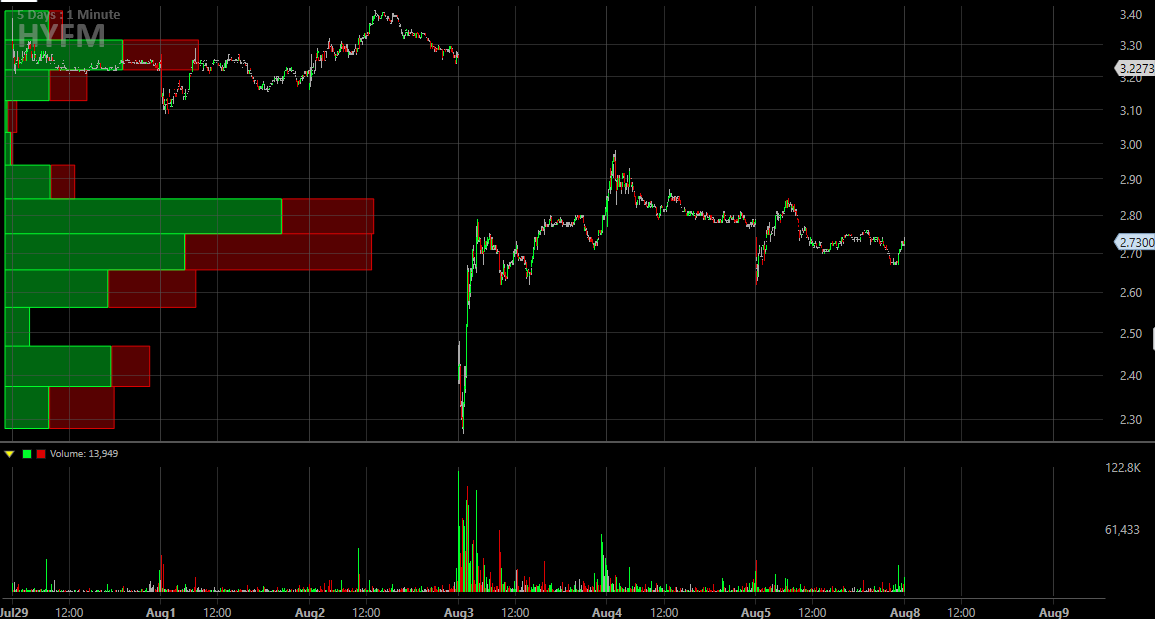 Innovative Industrial Properties has tanked since it discussed the issues with lessor Kings Garden in July. The stock rallied a bit after the report, which showed record revenue and AFFO in Q2, but it slipped Friday to below where it was on Wednesday before the release. The stock is down a stunning 50% since it sold $345 million of stock in early April at $190 per share. The stock is down a lot but may have printed a low before the report: 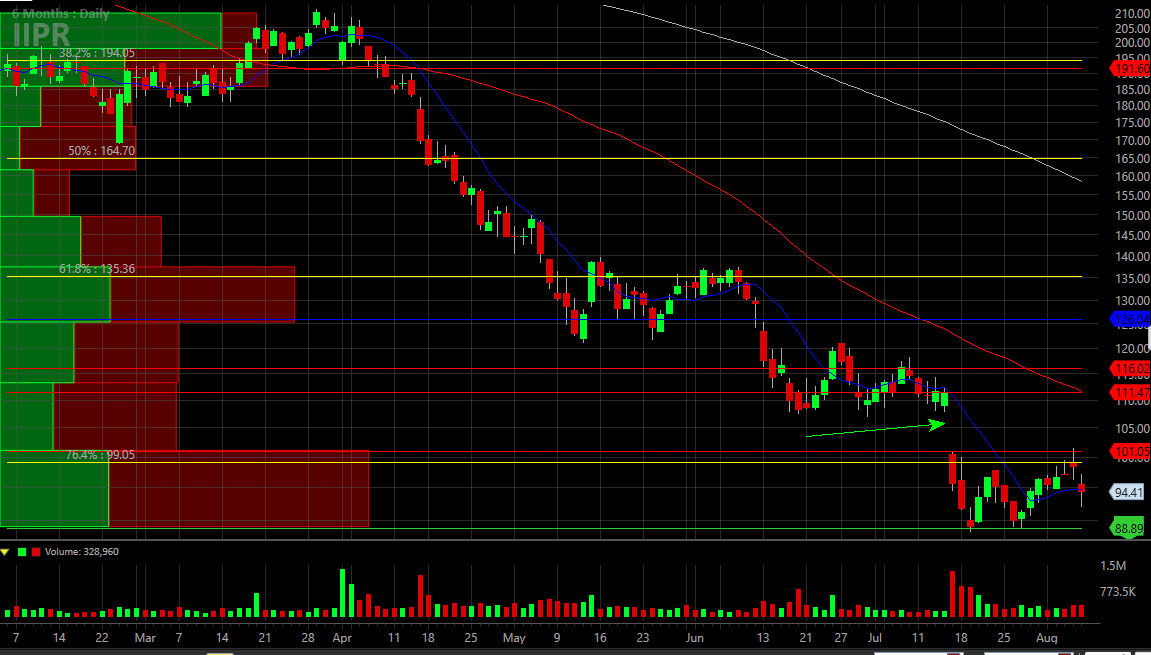 Scotts Miracle-Gro’s Hawthorne Gardening business had a tough fiscal Q3, with sales declining 63% from a year ago. The unit’s non-GAAP profit plunged 92%. The overall report was below expectations, and the company reduced its expectations for revenue for the fiscal year and EPS. The stock pulled back, but it remains a bit above the recent low: 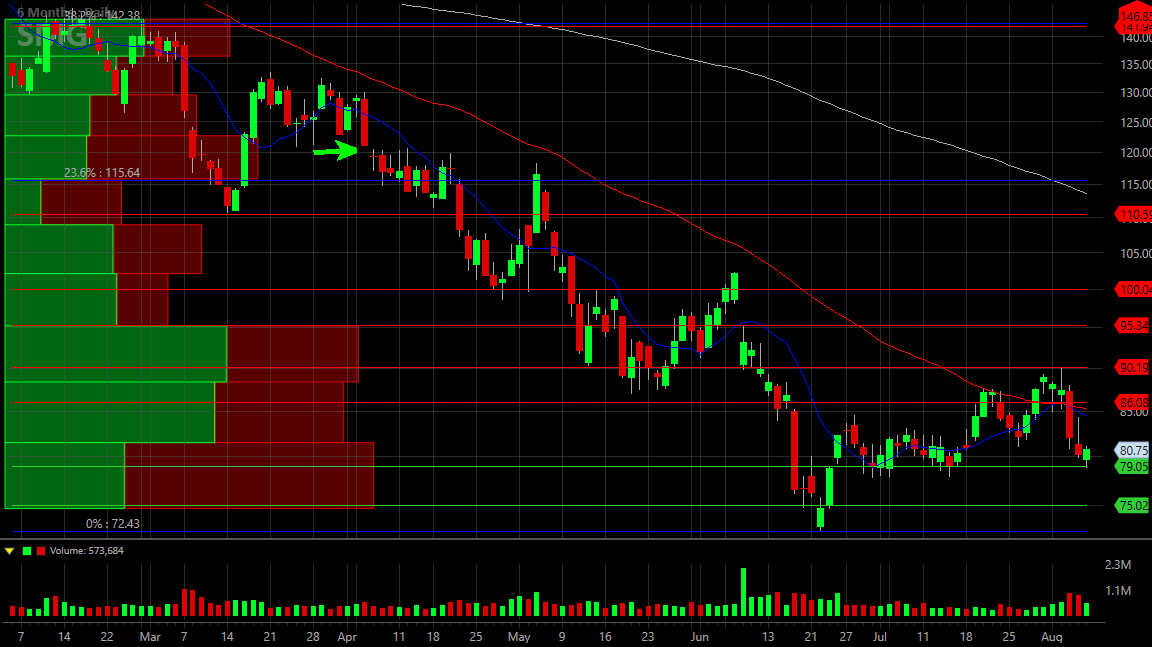 The start of earnings season confirmed in our view that the bear market that began in early 2021 appears to be over. Bad news was bought for a few names. Bulls need to be aware that there are still large sellers of stock – we aren’t out of the woods yet.

Adult-use cannabis sales in Illinois rose 7% sequentially in June to $135.7 million. However, compared to a year ago, growth fell from 9.7% to 6.2% for the month.

Cannabis sales decreased in 11 states by 0.8% in June compared to May according to cannabis data analytics firm BDSA. Sales were down in 7 markets, mostly driven by declining flower growth, compared to last year. In Eastern markets, Florida, which is still a medical-only market, saw strong growth with sales in June up 23.5% from a year ago. In Western markets, no state saw year-over-year positive growth, though there was some sequential growth in Colorado and Nevada.

Curio Wellness plans to expand through franchising. In an exclusive interview, Co-founder and CEO Michael Bronfein said the company is planning to take its Far & Dotter wellness center brand to 22 states and has signed its first franchise agreements. The company also likely will have one or two corporate-owned stores in new markets to serve as flagships and training centers for its franchisees. The ultimate goal is to become the leading franchisor for medical and adult-use dispensaries east of the Mississippi, according to Bronfein.

Canopy Growth Q1 revenue slipped 1.5% sequentially to C$110.1 million and was down 19% year-over-year. The company attributed the decline in part to a decline in value flower sales in the Canadian recreational cannabis market due to a deliberate business transition to focus on higher margin, premium and mainstream products. “We expect cost savings to ramp up in the second half of the year, enabling us to execute on our path to profitability even as we continue to invest in strategic growth initiatives including in BioSteel and our U.S. THC ecosystem,” said CEO David Klein.

Green Thumb Industries reported Q2 revenue rose 4.8% sequentially and 14.6% year-over-year to $254 million. Founder and CEO Ben Kovler said despite industry challenges, GTI is confident in its strategy. “Five percent revenue growth and greater than 300 basis point improvement in Adjusted EBITDA margins over the previous quarter demonstrate the results of our focus. We continue to maintain a strong balance sheet, which gives us ample flexibility to support our growth initiatives,” he said.

GrowGeneration Q2 revenue fell 13% sequentially and 44% year-over-year to $71.1 million. The company also provided updated revenue guidance for 2022 to be between $250 million to $275 million, down from previous guidance of $340 million to $400 million. GrowGeneration Co-founder and CEO Darren Lampert said the company faced significant industry headwinds resulting in disappointing results. “We expect the revenue and gross profit headwinds in the first half will continue in the second half, with the remainder of 2022 revenue declining compared to the first half as we are facing more pressure than we initially planned,” he said.

Innovative Industrial Properties reported record Q2 revenue of $70.5 million, up 44% from the prior year’s quarter. The company made four acquisitions of properties in Maryland, Arizona, Massachusetts and Texas, and executed five lease amendments. As of August 3, IIP owned 110 properties, representing a total of approximately 8.6 million rentable square feet.

Red White & Bloom’s Q1 revenue rose to C$28 million. CEO and Chairman Brad Rogers said the company was able to complete all of the acquisitions it discussed in the previous two years, including in Florida and Michigan. At the same time, the company is “right-sizing” for the long term.

Scotts Miracle-Gro saw Q3 sales from Hawthorne fell 63% year-over-year to $154.5 million compared to $421.9 million in 2021. Company-wide sales were down 26%. Chairman and CEO Jim Hagedorn said oversupply issues in the cannabis industry were responsible for the decline. As a result, he said the company is launching a business transformation effort it is calling Project Springboard, “which includes a series of aggressive steps to return the business to an appropriate level of performance.

The hydroponics industry recession is taking its financial toll on Hydrofarm. The company reported preliminary unaudited financials, with net sales estimated between $96 million and $97.5 million, down approximately 28% from the same three-month period a year ago. “We took positive steps during the second quarter to lower our cost structure and maintained a solid liquidity position; however, the hydroponics industry recession in the U.S. and Canada continued to alter normal seasonal patterns and impacted our results,” said Chairman and CEO Bill Toler.