Anyone who has been following the publicly-traded American cannabis sector is likely well aware of how convoluted the share structures can be. Most of these companies that have gone public through the Canadian Securities Exchange since 2018 have done so with a dual class structure (and sometimes three). In addition to making it difficult to easily understand the market cap of a company given the conversion ratios of these multiple voting shares or super voting shares, this type of arrangement can become a big corporate governance issue. When there are certain shareholders with elevated voting rights, then the voting power of common shareholders is diluted. The only vote then is to buy or sell the stock.

The companies using multiple classes of stock have made the traditional argument that by doing so it allows the founders to execute on their vision without having to focus too much in the very near-term on share price, allowing them to take a longer view. Previously, many of these companies used this structure as a workaround to prevent them from losing their status as a domestic issuer. Whatever the reasons, enough time has passed that the first argument doesn’t hold. Additionally, most companies have transitioned to U.S. GAAP accounting and are filing financials with the SEC rather than SEDAR, removing the threat of becoming a foreign issuer.

We think most investors have been aware of this issue and have been uncomfortable with it. Fortunately, there has been substantial progress in reducing the voting power concentrated in the hands of founders and early investors. Very recently, three MSOs have moved voluntarily to a one-class structure, including Ayr Wellness, Jushi Holdings and Planet 13. Trulieve followed through on its commitment to sunset its super voting shares 30 months after it began trading and now has two classes of stock instead of three, with subordinated voting share owners controlling the voting power at this time.

In the table below, we detail how much voting power is held by subordinated voting share owners for the top MSOs by revenue, and the majority of these companies have at least 50% or more of the voting power held by owners of subordinated shares. 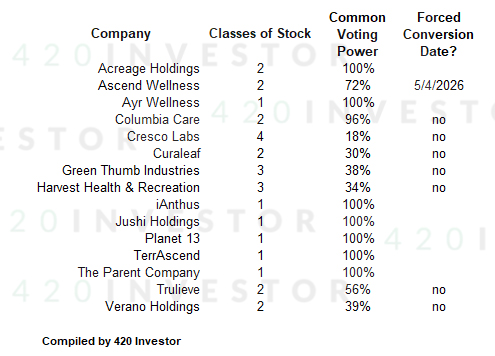 The most recent company of these to go public, Ascend Wellness, did so with the subordinated voting shares having more than 50% of the voting power. It also, like Trulieve, put in place a sunset date, where the multiple voting shares will be converted automatically into the one remaining class of stock in this case. Note as well that while Acreage has two classes of stock, there are no voting preferences.

Going against the trend of diminishing or eliminating multiple class structures, Curaleaf’s Board of Directors is asking its shareholders to approve a resolution on September 9th that would eliminate a sunset provision for its multiple voting shares. When the company went public, it had said that this class would be forced to convert to subordinated voting shares in October of this year. The proxy, in our opinion, doesn’t provide a valid reason for shareholders to allow the company to reverse its prior commitment.

Broadly speaking, the industry as a whole has seen considerable progress of simplifying the capital structures and improving corporate governance for American cannabis companies. In addition to the reduction or elimination of multiple classes of voting stock, many companies have made other improvements, including moves to make the majority of directors independent. As the American cannabis industry continues to mature, we expect even more progress will be made. 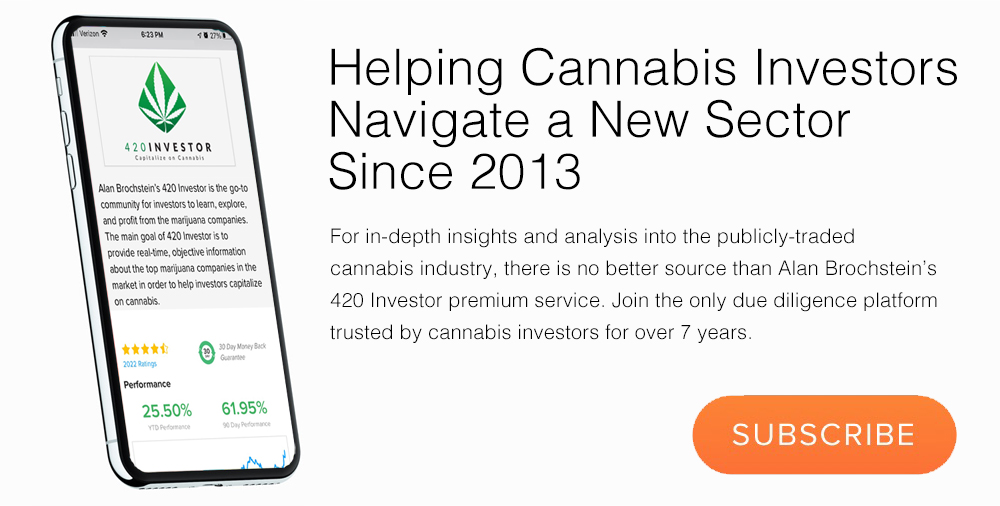 Get the facts and be ready for important milestones and catalysts with a subscription to Alan Brochstein’s 420 Investor, the longest running due diligence platform trusted by cannabis investors for over 7 years. The primary goal of 420 Investor is to provide professional, real-time, objective information about the top cannabis companies in the market in order to help investors Capitalize on Cannabis™.