The Public Cannabis Company Revenue & Income Tracker, managed by New Cannabis Ventures, ranks the top revenue producing cannabis stocks that generate industry sales of more than US$12.5 million per quarter (C$16.2 million). This data-driven, fact-based tracker will continually update based on new financial filings so that readers can stay up to date. Companies must file with the SEC or SEDAR and be current to be considered for inclusion. Please note that we have raised the minimum quarterly revenue several times as the industry has scaled up, including from US$10.0 million in November 2020, US$7.5 million in June 2020, US$5.0 million in October 2019 and US$2.5 million in May 2019.

38 companies currently qualify for inclusion, with 27 filing in U.S. dollars and 11 in the Canadian currency, which is up four from our update a month ago. As a result of the higher minimum quarterly revenue, Cronos Group (TSX: CRON) (NASDAQ: CRON), Vireo Health (CSE: VREO) (OTC: VREOF) and cbdMD (NYSE American: YCBD) were removed from the group of American dollar companies, Additionally, 4Front (CSE: FFNT) (OTC: FFNTF) was removed due to a financial restatement that pushed it below the minimum. We added Greenlane Holdings (NASDAQ: GNLN) and Turning Point Brands (NYSE: TPB) after giving careful consideration to the nature of their revenue. For Greenlane, less than 10% is non-cannabis, while the smoking segment appears to be more than 90% related to cannabis. For Canadian dollar companies, Alcanna (TSX: CLIQ) (OTC: LQSIF) was removed from the list of Canadian dollar companies. while Meta Growth was removed due to its acquisition. MediPharm Labs (TSX: LABS) (OTC: MEDIF) was also removed after its quarterly revenue fell below the prior minimum. We continue to expect additional companies to qualify in the future.

Over the past couple of weeks, several of the largest MSOs reported stellar financials, as we highlighted in last week’s newsletter. Since our last update, Curaleaf Holdings (CSE: CURA) (OTC: CURLF) moved to the top spot among MSOs as its report included acquired revenue for part of the quarter following its acquisition of Grassroots Cannabis. The company reported pro forma revenue, which grosses up the revenue from its managed services and also accounts for acquired revenue as if it had been included for the full quarter, of $215 million. Cresco Labs (CSE: CL) (OTC: CRLBF) made a major move towards the top as its revenue increased 63% sequentially. Notably, this was organic growth, which also yielded the company’s first adjusted operating profit. Cresco cited strength in all of its markets, with California, Illinois and Pennsylvania driving the most growth in overall revenue.

Trulieve (CSE: TRUL) (OTC: TCNNF) beat expectations for both its revenue and adjusted operating income, maintaining its position as the most profitable company, with an adjusted operating margin of 44%. Ayr Strategies (CSE: AYR.A) (OTC: AYRSF) rebounded strongly from Q2, when its sales were negatively impacted by pandemic-related closures in both of its market, Massachusetts and Nevada. Its results were slightly ahead of analyst expectations. iAnthus (CSE: IAN) (OTC: ITHUF) grew revenue sequentially in Q3, but its adjusted operating loss expanded. The company attributed its growth to strength in its Florida and Arizona. TILT Holdings (CSE: TILT) (OTC: TLLTF), which was also impacted by closures in Massachusetts in Q2, experienced a less robust recovery. 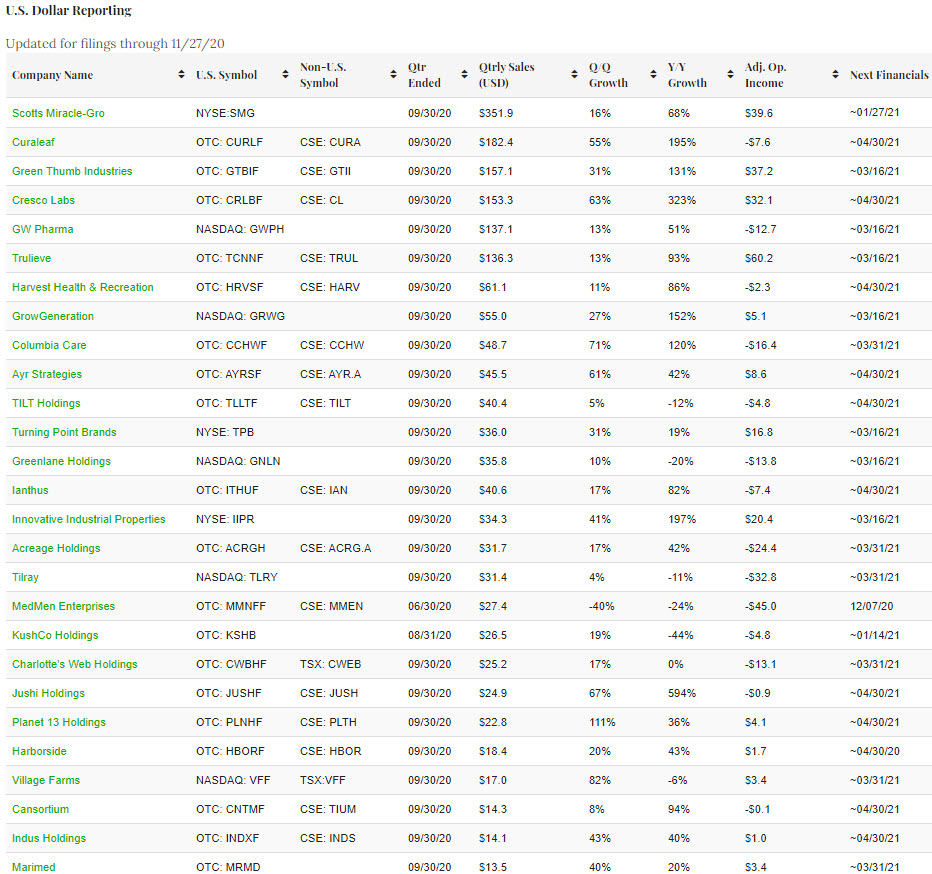 Over the balance of the year, only MedMen (CSE: MMEN) (OTC: MMNFF) is expected to report financials. The company has scheduled a call for December 7th to discuss its fiscal Q1 results.

Since our last update, TerrAscend (CSE: TER) (OTC: TRSSF) was the only company that reports in Canadian dollars to provide a financial update. It had pre-announced its Q3 financial results, which it met, and it shared a bullish outlook, with the company projecting 2021 revenue of C$360-380 million with adjusted EBITDA of C$140-160 million. The company’s growth in Q3 was driven by its operations in Pennsylvania. Its Canadian operations represented just 11% of its overall revenue in the first three quarters of the year.

Over the balance of the year, Organigram (TSX: OGI) (NASDAQ: OGI) will report its fiscal Q4 on November 30th. According to Sentieo, analysts expect the revenue will improve modestly from Q3 to C$18.5 million. Fire & Flower (TSX: FAF) (OTC: FFLWF) is expected to report its fiscal Q3 by mid-December.

For those interested in more information about companies reporting, we publish comprehensive earnings previews for subscribers at 420 Investor, including for Focus List members Fire & Flower and Organigram.