Nineteen companies currently qualify for inclusion, with nine filing in U.S dollars and ten in the Canadian currency. Since our last update, we removed MedReleaf, which would hold the fourth spot among companies filing in the Canadian currency, as the company has been acquired. We added Tilray (NASDAQ: TLRY) following its initial public offering. While it operates in Canada, it reports in U.S. dollars.

In mid-July, Kush Bottles (OTC: KSHB) reported sales of $12.9 million for its FY18-Q3 ending May 31, representing growth of 173% from year-ago levels. This was well ahead of the consensus forecast of $12.04 million. CV Sciences reported sales for Q2 ending June 30 on August 1st, with the $12.3 million representing growth of 203% from year-ago levels. The company reported 31% Adjusted EBITDA margins. 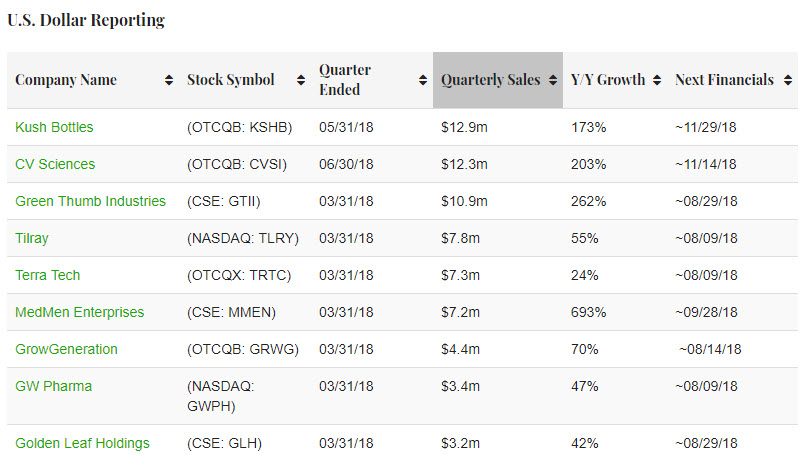 On August 1, Aphria (TSX: APH) (OTC: APHQF) provided financials for its fiscal Q4 ending May 31, with sales rising 81% over year-ago levels and 17% from Q3. The company reported a sequential decline in adjusted EBITDA, even when isolating its Canadian ACMPR operations, with cash costs of production increasing slightly over the quarter. Namaste Technologies (TSXV: N) (OTC: NXTTF) reported 31% sales growth in its FY18-Q3 ending May 31, but this is a dramatic slowdown from recent growth levels, with operating losses accelerating. Isodiol International (CSE: ISOL) (OTC: ISOLD) saw sales decline in its FY 18-Q4 ending March 31 from the prior quarter. Finally, Organigram (TSXV: OGI) (OTC: OGRMF) reported FY18-Q3 financials for the period ending May 31 on July 30th, with sales growing 93% from year-ago levels. 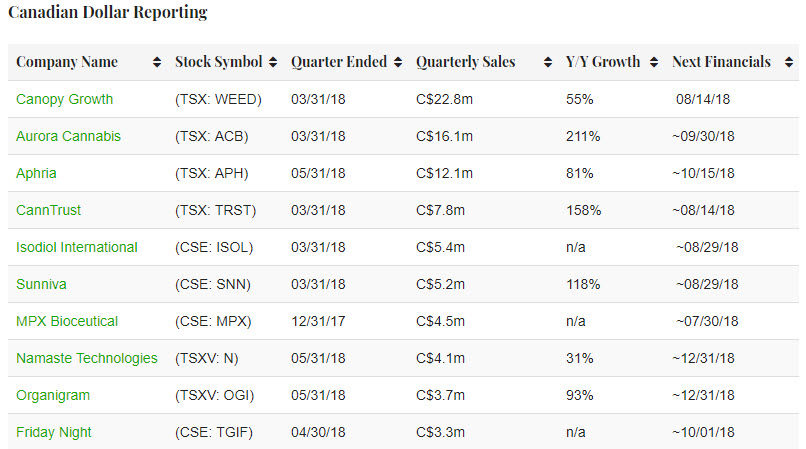 Over the balance of August, several companies are scheduled to provide financial updates. Canopy Growth (TSX: WEED) (NYSE: CGC) has scheduled a conference call to discuss the financials from its FY19-Q1 ending June 30 on August 14th.  Sentieo reports the analyst consensus for sales of C$25.72 million, which would represent growth of 62%. We continue to expect this list of revenue generating companies to grow and are monitoring for additional companies that meet the qualifications. CannTrust (TSX: TRST) (OTC: CNTTF) will report Q2 financials by mid-August as well, with Sentieo suggesting that analysts forecast sales of C$8.95 million, which would represent growth of 97%. Isodiol International, Sunniva (CSE: SNN) (OTC: SNNVF) and Friday Night (CSE: TGIF) (OTC: TGIFF) are expected to provide quarterly financials by the end of August. MPX Bioceutical  (CSE: MPX) (OTC: MPXEF)will provide financials for its fiscal Q4 ending March 31 this afternoon following a delay. According to Sentieo, the analyst covering the company expects sales to jump to C$6.9 million, which would represent annual growth of 54%. The company is also expected to provide financials for FY19-Q1 ending June 30 before the end of August.