Earnings season for American cannabis companies is off to a fantastic start. We heard from some of the largest operators and ancillary companies this past week, and they all provided strong near-term results. While the revenue growth rates remain impressive, what is really capturing our attention is how much more efficient these companies have become, resulting in bottom-line growth that is far exceeding expectations.

With four of the leading MSOs and two of the leading ancillary companies that reported, here is how revenue, gross profit and SG&A changed in Q1 compared to a year ago along with the change in operating margin:

Curaleaf, which reported revenue ahead of the consensus of $253 million, saw cash SG&A grow at 75%, well below the revenue growth rate, helping the operating margin expand 1900 bps. Green Thumb Industries, which reported entirely organic revenue growth, also exceeded expectations of $187 million. It boosted its operating margin by 1900 bps as well, with most of the gain coming from substantially lower SG&A relative to revenue. Trulieve, which also beat expectations of $189 million, was the only company to see gross profit grow more slowly than revenue, which was due to its entry into Pennsylvania. Its gross margin and operating margin remain at the top of the industry.

The largest American cannabis companies delivered impressive results in Q1, demonstrating that they are rapidly scaling and improving profitability. We discussed last week that weakness in large Canadian LP stocks has been weighing on the American stocks, and the news this week from Aurora Cannabis and Tilray, who are struggling with the adult-use market in Canada, pushed their stocks even lower. The MSOs that reported last week generally fared better than the New Cannabis Ventures Global Cannabis Stock Index, which fell 8.2%. Harvest, of course, rallied on the acquisition announcement: 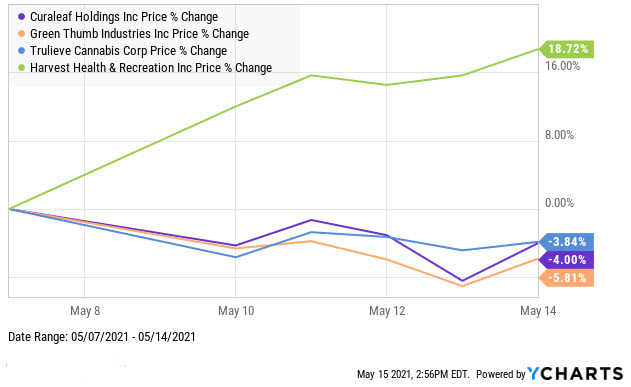 While cannabis stocks continued to correct last week, led by large Canadian LPs, we didn’t see anything in the reports of leading American companies that would suggest any sort of fundamental reasons for concern. We will still be getting reports from several MSOs over the balance of May, and there aren’t any reports from large LPs until Canopy Growth reports in early June. Continued reports of strong execution from MSOs in the absence of negative reports from the largest Canadian LPs could capture investor attention in the weeks ahead.

Vireo Health International, Inc. is a physician-led cannabis company focused on bringing the best of technology, science, and engineering to the cannabis industry. Today, Vireo is licensed to grow, process, and/or distribute cannabis in 8 markets and operates 16 dispensaries nationwide. The company is focused on Arizona, Maryland, Minnesota, New Mexico and New York, with 3 of the markets recently legalizing and the other 2 potentially doing so in the near future.