The Public Cannabis Company Revenue & Income Tracker, managed by New Cannabis Ventures, ranks the top revenue producing cannabis stocks that generate industry sales of more than US$10 million per quarter (C$13.1 million). This data-driven, fact-based tracker will continually update based on new financial filings so that readers can stay up to date. Companies must file with the SEC or SEDAR and be current to be considered for inclusion. Please note that we raised the minimum quarterly revenue several times as the industry has scaled up, including from US$7.5 million in June 2020, from US$5.0 million in October 2019 and from US$2.5 million in May 2019.

38 companies currently qualify for inclusion, with 24 filing in U.S. dollars and 14 in the Canadian currency, which is up from the 35 when we reported in mid-August and 34 at the end of July. In the U.S., we added Cansortium (CSE: TIUM) (OTC: CNTMF), Harborside (CSE: HBOR) (OTC: HSDEF) and Jushi Holdings (CSE: JUSH) (OTC: JUSHF). Some companies have taken advantage of revised filing deadlines that have been extended due to the pandemic, and we expect to continue to see some delays. We also expect to add a few names to the rankings over the balance of the year.

In the back half of August, the largest MSO by market cap, Curaleaf (CSE: CURA) (OTC: CURLF), met its guidance for pro forma revenue and delivered reported revenue of $117.5 million, a 22% expansion over Q1, making it the third MSO to achieve the $100 million quarterly revenue milestone. The company provided guidance for Q3 managed revenue, which will include about two months of revenue from recently acquired Grassroots Cannabis, to be $190-200 million. Managed revenue, which grosses up service contracts in states that are not-for-profit, was $121.4 million in Q2, so its outlook is for revenue to grow sequentially by at least 57% on the back of the addition of Grassroots. Its pro forma revenue outlook for $205-215 million, which takes into account what the full quarter would be for Grassroots, would represent an apples-to-apples comparison growth of at least 24%.

Cresco Labs (CSE: CL) (OTC: CRLBF) reported revenue well ahead of expectations as it saw at least 30% sequential growth in all of its markets except Massachusetts, which was impacted by mandated closure of adult-use stores, drive 42% sequential growth in overall revenue to $94.3 million. The company cited strength in California, Illinois and Pennsylvania as key drivers. It also noted that $55 million of its revenue was from the sale of its branded products to third-party retailers.

TILT Holdings (CSE: TILT) (OTC: TLLTF), which reported a 9% sequential decline in revenue to $38.6 million, was impacted by COVID-19 issues in both its ancillary and direct cannabis businesses. AYR Strategies (CSE: AYR.A) (OTC: AYRSF), similarly, was impacted by closures in both of its markets, Massachusetts and Nevada.

The three new additions to the list all showed sequential growth. Harborside, which had been delinquent in its filings or would have qualified in the prior quarter, was able to grow 12% as it generated a positive operating profit. Jushi Holdings experienced 73% sequential growth, driven by its retail operations in Illinois and Pennsylvania despite closures of two stores in the Philadelphia area due to violence-related issues in June. The company expects strong growth ahead, providing guidance for Q3 revenue of $22-25 million and Q4 revenue of $25-30 million, and it also reaffirmed 2021 guidance for revenue of $200-250 million with adjusted EBITDA of $40-50 million. Cansortium’s 30% sequential growth in Q2 was driven by its Florida operations, where it has significantly expanded its dispensary footprint. 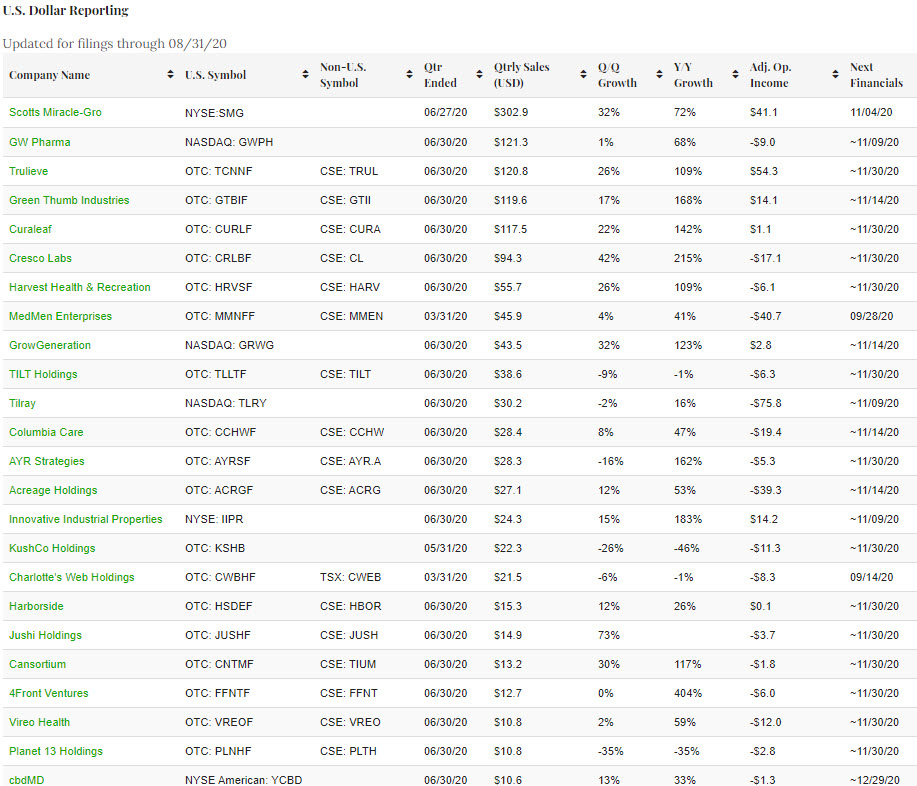 During September, MedMen (CSE: MMEN) (OTC: MMNFF) and Charlotte’s Web (TSX: CWEB) (OTC: CWBHF) are expected to report. MedMen will report its fiscal Q4 ending in June. According to Sentieo, it is expected to have generated revenue of $42 million, which would be unchanged from a year ago and down 9% from Q3. Charlotte’s Web will report its Q2 on September 14th. Analysts expect that revenue, which includes a contribution of less than a month from the recently acquired Abacus Health Products, to have been $25.9 million, up 21% from Q1 and 4% from a year ago.

For those interested in more information about companies reporting, we publish comprehensive earnings previews and reviews for subscribers at 420 Investor on many of these companies, including for Focus List name Charlotte’s Web.

Of the companies that report in Canadian dollars, TerrAscend (CSE: TER) (OTC: TRSSF) continued to climb in the rankings, with its Q2 revenue growing 36% above Q1 as it ramped up its operations in Pennsylvania. The company provided guidance for the balance of the year to achieve revenue in excess of C$192 million, with adjusted EBITDA in excess of C$45 million. Alcanna (TSX: CLIQ) (OTC: LQSIF) saw its cannabis revenue contract sequentially by 8% as it remained profitable in those operations. The vast majority of its stores are in Alberta, which has become very competitive. The company derives most of its revenue from its Alberta liquor retail operations, which were strong during Q2. 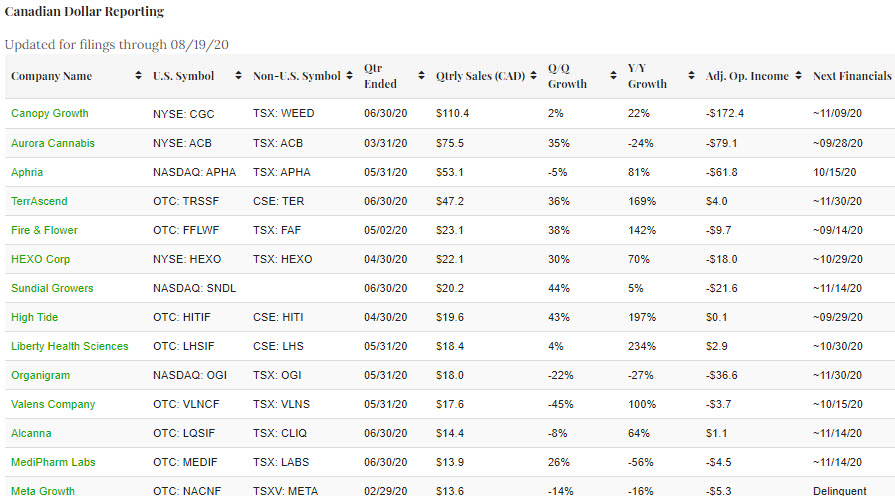 In September, Aurora Cannabis (TSX: ACB) (NYSE: ACB), Fire & Flower (TSX: FAF) (OTC: FFLWF), High Tide (CSE: HITI) (OTC: HITIF) and Meta Growth (TSXV: META) (OTC: NACNF) are expected to report. Aurora Cannabis, which hasn’t yet scheduled its conference call to discuss its Q4 financials, has shared a forecast that it expects its adjusted EBITDA to be approximately break-even. According to Sentieo, analysts project that its revenue will increase slightly over Q3 to C$76.8 million, which would represent a decline of 22% from its record quarter a year ago. Fire & Flower, which has scheduled its earnings release for the 15th, is expected to report modest sequential growth as well in its fiscal Q2, with analysts forecasting revenue of C$24.2 million, which would represent annual growth of 118%. High Tide, which is in the process of acquiring Meta Growth, hasn’t scheduled its earnings release, but it is expected to see sales expand by 12% to C$22 million in its fiscal Q3. Meta Growth has taken advantage of a reporting deadline extension for its fiscal Q2, which is now September 11th.

For those interested in more information about companies reporting, we publish comprehensive earnings previews and reviews for subscribers at 420 Investor, including for Focus List members Aurora Cannabis and Fire & Flower.