We were surprised to see Tilray surge initially after its report this week. The company missed analyst estimates on both revenue and profitability, but rallied nonetheless. We thought that perhaps the positive reaction was due to relief that the numbers weren’t actually even worse, but we believe that the market was perhaps keyed to something beyond revenue and adjusted EBITDA. Instead, traders likely took note of the reported net income and earnings per share (EPS), which were well ahead of expectations.

The Tilray press release trumpeted its profits but did very little to explain them. The first of five bullet points detailed its $52.5 million net income, but this was never discussed in the body of the press release:

The income statement included in the release, of course, made it easy to see what was going on, at least to those who looked at it. Historically, the company had always released its filings before the earnings call and before the market opened, but that wasn’t the case. After issuing a press release ahead of the market open, the 10-Q wasn’t filed until after the close. With that information, it became much easier to understand how Tilray generated its so-called profit. Quite simply, most is due to the plunge in the price of its stock during the quarter.

A big part of the accounting profit was due to $72.7 million of non-operating income. In other words, were it not for this item, which was detailed in the filing, then the company would have reported a loss. The 10-Q broke down the non-operating income into mainly $56.1 million of change in the value of its convertible debentures and $21.1 million of change in the value of warrant liabilities. The decline in the stock price made these liabilities worth less, which resulted in $77.2 million of income. This was aided by a $1.4 million non-specified gain and somewhat offset by small losses on foreign exchange and long-term investments.

Another item that helped boost profits was a -$29.1 million operating expense, a change in the fair value of the contingent consideration for the recently acquired Sweetwater. This means that the cash earnout due beginning in December 2023 is now less likely. In other words, because its acquisition isn’t living up to prior expectations, Tilray isn’t likely to make the payout it had projected previously. 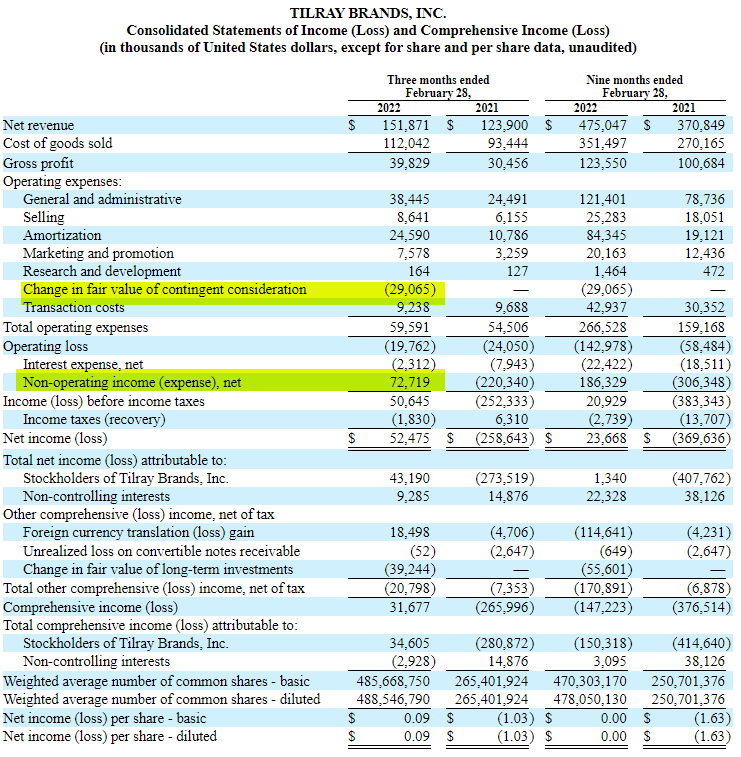 Tilray reported $50.6 million pre-tax income. Had it not had the non-operating and operating adjustments detailed above, it would have reported a pre-tax loss of $51.2 million.

While Tilray wants investors to believe things are going well, we suggest ignoring its boasts of profitability, as falling stock prices and deals failing to meet expectations aren’t the foundations of success. The company also bragged about revenue growth, but it compared not only the combined company’s results but also those of recently acquired Breckenridge Distillery in this quarter to those of just Aphria a year ago. The cannabis segment on an apples-to-apples basis declined, but the company pointed to its growth of 32%. Similarly, the 64% growth reported for beverage alcohol was mainly due to the acquisition.

One thing that grew strongly was share-count. While the company spent a lot of verbiage talking about growth in revenue and other metrics, the weighted average share-count growth was even higher at 84%, the highest growth number we saw in that press release. To make matters worse, Tilray did exactly what we expected and had discussed in this letter recently, hitting its At-The-Money (ATM) shelf hard. Subsequent to the end of the quarter, the company sold 16.9 million shares between March 3rd and April 6th, raising $90 million (at an average of about $5.31) and leaving it with $310 million availability. As a result of these stock sales, the company incurred an additional $6.45 million potential cost as it was forced to lower the exercise price on its warrants from $5.95 to $4.91.

Tilray’s press release made it sound like things are going well, but a careful review of the financials paints a different picture. The company suffered from negative growth on an organic basis, and its share-count has exploded. The cash flow from operations was -$46.3 million, and the net debt continues to expand. It’s no wonder the company is so aggressively selling its shares, especially as a big portion of its debt is about to become current. The company talks about aggressive M&A plans, but it lacks the financial ability to do anything but share-based transactions from our perspective. We continue to believe that investors should brace for more stock sales by Tilray in the months ahead.