Due to the rapid growth in the cannabis industry, we raised the minimum to US$25 million (C$31.5 million) to qualify for what we now call the senior list and introduced a junior list with a minimum of US$12.5 million (C$15.6 million) in September 2021. At the time of our last update in mid-March, 36 companies qualified for inclusion on the senior list, including 30 filing in U.S. dollars and 6 in the Canadian currency. The junior list now includes 11 reporting in U.S. dollars and 5 in Canadian dollars. On a combined basis, the Public Cannabis Company Revenue & Income Tracker now includes 53 companies. Since our last update, Agrify (NASDAQ: AGFY) has joined the senior list of companies that report in American dollars, now 31, and IM Cannabis (CSE: IMCC) (NASDAQ: IMCC) has joined the junior list of companies that report in Canadian dollars. We expect to add additional companies in the months ahead, and, due to pending or recently completed mergers, we anticipate some removals as well. We note that Intercure (TASE: INCR) (NASDAQ: INCR), which reports in the Israeli currency, qualifies for the junior list, but we haven’t yet added it due to its different reporting currency.

Since our last update, several companies have reported, including some of the largest MSOs. Note that we recently provided an update covering reports from the first part of the month that suggested that cannabis companies were seeing increased pricing pressure. Since then, Trulieve (CSE: TRUL) (OTC: TCNNF), Cresco Labs (CSE: CL) (OTC: CRLBF), Columbia Care (CSE: CCHW) (NEO: CCHW) (OTC: CCHWF), Ayr Wellness (CSE: AYR.A) (OTC: AYRWF), Jushi Holdings (CSE: JUSH) (OTC: JUSHF), Greenlane (NASDAQ: GNLN), TILT Holdings (NEO: TILT) (OTC: TLLTF) and TerrAscend (CSE: TER) (OTC: TRSSF) are among the companies that have reported Q4 financials. Now ten companies are generating quarterly revenue in excess of $100 million. Trulieve, Columbia Care, Ayr Wellness, Jushi and TILT Holdings all provided full year guidance or Q4 2022 guidance that was below the prior expectations of the analysts, extending on the trend from earlier in the month. Regulatory delays, soft demand early in the year and pricing pressure were commonly cited as factors driving the reduced outlooks. Most companies see the second half of the year as being substantially stronger than the first half. 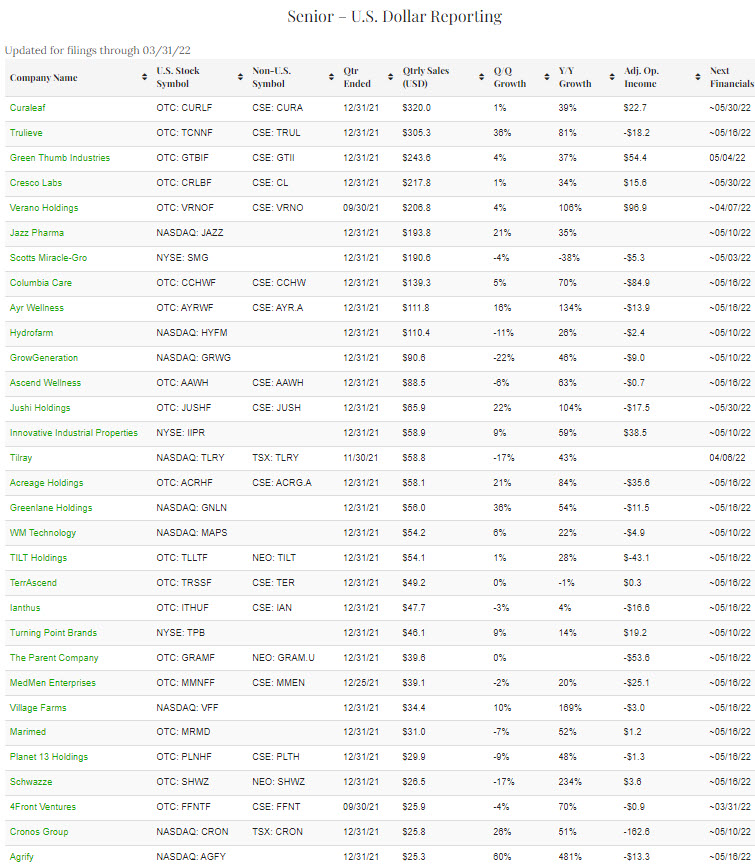 In April, Verano Holdings (CSE: VRNO) (OTC: VRNO) and Tilray (TSX: TLRY) (NASDAQ: TLRY) are among the larger companies reporting financials. According to Sentieo, Verano’s Q4 revenue is expected to increase 183% from a year ago to $210 million, up slightly from Q3. Analysts expect adjusted EBITDA to be $93 million. Analysts expect Tilray to see slight sequential growth in its fiscal Q3 to $159 million. Data from Hifyre suggests that its adult-use sales in Canada plunged relative to Q2. Adjusted EBITDA is expected to be $13 million.

High Tide (TSXV: HITI) (NASDAQ: HITI), HEXO Corp (TSX: HEXO) (NASDAQ) and Nova Cannabis (TSX: NOVC) (OTC: NVACF) reported since our last update. For each of them, M&A has helped boost the growth compared to a year ago. High Tide revenue exceeded expectations, while HEXO fell short. The massive operating loss was mainly due to asset impairments. Nova Cannabis revenue was just under the single-analyst estimate. 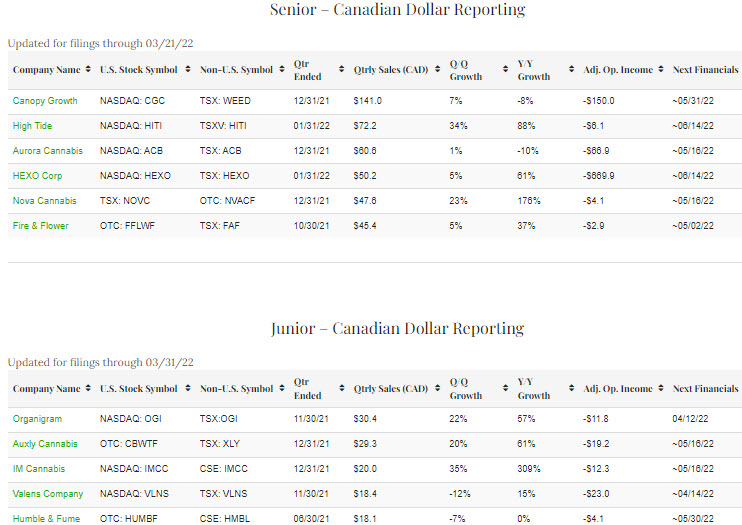 Organigram (TSX: OGI) (NASDAQ: OGI) will be reporting its fiscal Q2 in April. According to Sentieo, the company’s revenue is expected to increase 116% to C$31.67 million, which would elevate the company to the senior list. Adjusted EBITDA is expected to be -C$1.63 million.

For those interested in more information about companies reporting in April, we publish comprehensive earnings previews for subscribers at 420 Investor, including for Focus List members mentioned here Organigram, Tilray and Verano Holdings.