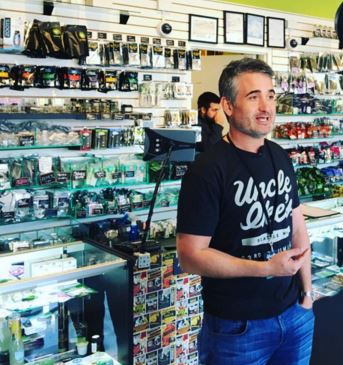 Ian Eisenberg opened the second retail store in Seattle last year, Uncle Ike’s Pot Shop, and did over $10mm in sales in the year ending in September.  The serial entrepreneur, who has climbed Mt. Kilimanjaro and Mt. Rainier, cashed out of soda-maker Zevia but continues to run a car wash (he provides free car washes to store patrons).

Uncle Ike’s battled daily protests from Mount Calvary Christian Center when it opened and will soon battle increased competition as Washington permits more license holders. Eisenberg, who grew up in Seattle and says he used to buy cannabis on the same corner as his store, thinks the number of stores in Seattle will double from 19. He may use the medical marijuana endorsement he received but sees opening more stores as his best option.

I thought it’d be the exciting, glamorous world of drug dealing, but it’s more like running a 7-Eleven