After two months of modest rallies that followed a very weak April, Canadian cannabis producers sold off sharply in July, with the Canadian Cannabis LP Index decreasing 13.0% to 761.55: 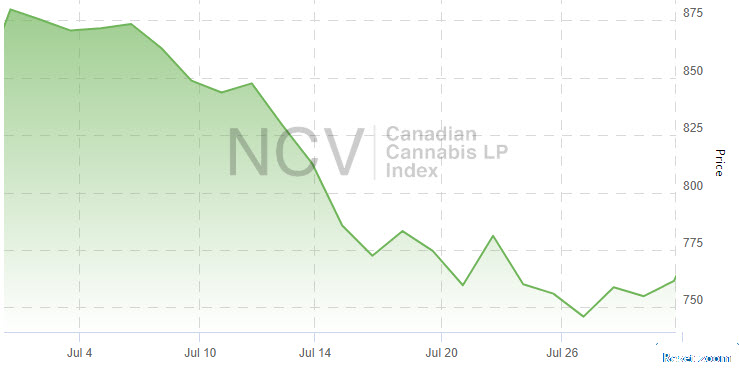 Tier 1, which includes the LPs that are generating sales of at least C$4 million per quarter, retreated 11.1% in July and ended down 1.0% year-to-date. This group included Aphria, Aurora Cannabis, CannTrust (CSE: TRST) (OTC: CNTTF), Canopy Growth and MedReleaf. Within the group, Aphria posted the best return though is still the down the most in 2018, while Aurora Cannabis, the best performer in June, was the worst one during July.

Tier 2, which includes the remaining LPs that are permitted to generate sales, fell 12.7%, its sixth consecutive monthly decline, and ended down 23.5% year-to-date. Hiku Brands (CSE: HIKU) (OTC: DJACF) was the best performer, rallying following the announcement that it would abandon its acquisition of WeedMD (TSXV: WMD) (OTC: WDDMF) in favor of merging with Canopy Growth. WeedMD and 48North (TSXV: NRTH) (OTC: NCNNF) were both down 26%.

Tier 3, which includes the LPs that are licensed to cultivate but not yet approved to sell, fell 14.1% and remains the weakest performer in 2018, down 28.9% year-to-date through the end of July. Golden Leaf Holdings (CSE: GLH) (OTC: GLDFF) was the only name in the group to rise, while Benchmark Botanics (CSE: BBT) (OTC: BHHKF) and RavenQuest (CSE: RQB) (OTC: RVVQF) each lost more than one third of their value.

The returns for the overall sector varied greatly, with only three stocks increasing in value while seven fell in excess of 20%: 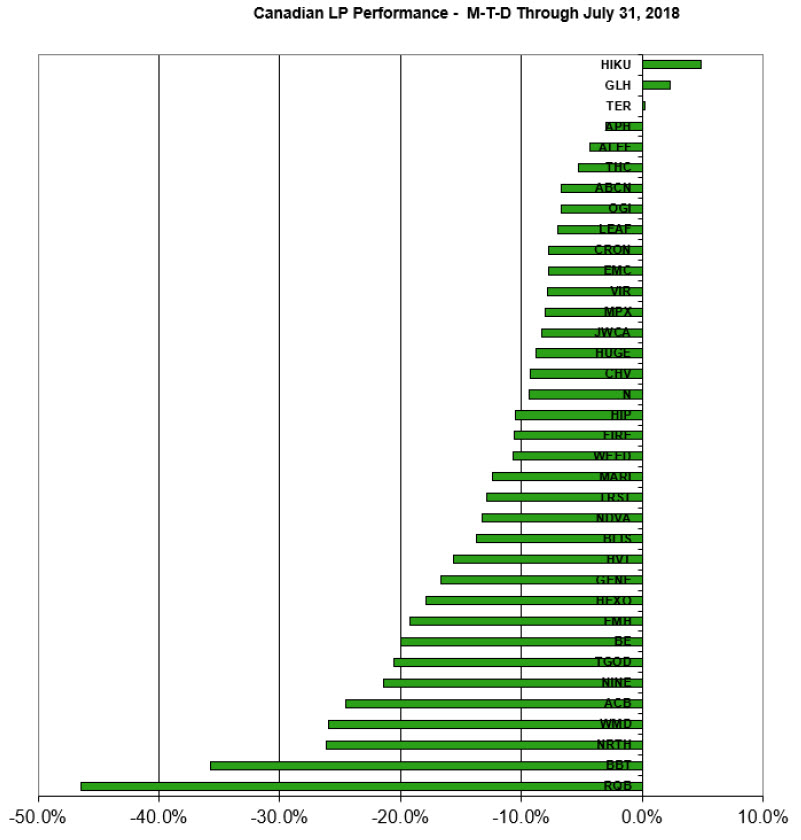 For August, the overall index had four additions, including Eve & Co (TSXV: EVE) (OTC: EVVFF), which has been added to Tier 2, and  and GTEC Holdings (TSXV: GTEC) (OTC: GGTTF), Pure Global Cannabis (TSXV: PURE) (OTC: PRCNF) and   Sproutly (CSE: SPR) (OTC: SRUTF), which have been added to Tier 3. Note that Tilray, with no Canadian listing, is not eligible for inclusion in the index.