With three reports from some of the largest Canadian LPs over the past few days, we have now had six so far in 2020, including Aphria, Aurora Cannabis, Canopy Growth, Hexo, Organigram and Supreme Cannabis. One of the first things investors look at is the top-line number, revenue, and recent financial reports suggest to us that there are several reasons to examine the sources of revenue more closely. Simply said, not all revenue is the same, and we think there are at least three issues with which investors should be familiar.

Several LPs have acquired businesses that are outside of cannabis cultivation, processing or sale or even related ancillary services and products. Aphria, for example, derives the majority of its revenue from distribution of European pharmaceuticals. Tilray acquired Manitoba Harvest, which is a hemp food provider. Canopy Growth’s fiscal Q3 report included revenue from the recent acquisition of This Works, a skincare company it acquired for $74 million last May as a platform for CBD cosmetics. The company didn’t break out the amount of revenue, but it grew 42% from the prior quarter. Additionally, it included an undisclosed amount of revenue from its recent acquisition of BioSteel Sports Nutrition, which is also non-cannabis. Finally, revenue is substantial from its C3 unit that it acquired for C$343 million last April, with Q3 sales up 3% from Q2 to $14.8 million. The company doesn’t break it out, but the sales include both extracted cannabis and synthetic cannabinoids, and we estimate that the vast majority of revenue is from synthetic THC. We would suggest that investors value the synthetics, which are essentially a generic drug, at substantially less than how they value natural cannabis.

We propose that rather than using a simple price to sales or projected sales metric that investors break up the businesses and apply an appropriate metric to each segment. For example, Aphria paid just €18.92 million upfront with an additional €23.5 million when performance milestones were met for CC Pharma in early 2019, which it said had generated revenue of of approximately €262 million, with EBITDA of approximately €10.5 million in 2018. This worked out to be just 0.16X trailing revenue, and investors should treat it very differently than they do the cannabis business, which presumably has much higher margins. For the benefit of our readers, we include only cannabis-related revenue, when it can be clearly broken out, in the Public Cannabis Company Revenue & Income Tracker.

LPs generate cannabis revenue in a variety of ways, including selling into the provinces for adult-use, Canadian medical cannabis, international medical cannabis, retail sales through stores and also wholesale sales to other LPs. Canopy Growth, for example, broke out its fiscal Q3, revealing overall direct cannabis gross revenue to be 52% adult-use, 15% retail stores, 14% Canadian medical and 18% international medical. On the call, management said almost no revenue was attributed to wholesale.

Two companies that saw big swings in their revenue from changes in wholesale were Aurora Cannabis and Organigram. Aurora Cannabis was negatively impacted by lower wholesale revenue in its fiscal Q2, with a decline from $10.3 million to just $2.4 million. Organigram was positively impacted, as it saw a jump in its fiscal Q1 to $9.2 million from less than $600K during its fiscal Q4. Its gross margin and pricing were quite high in this part of their business, but it can be difficult to sustain wholesale activity absent long-term supply agreements, which means that investors should expect potential volatility in this part of the business.

One of the pitfalls of the provincial distribution model for adult-use is that suppliers are at the mercy of their single customer, the province, unlike in medical cannabis, where the customer is the individual. For the past few quarters, returns and provisions for returns have had a major impact on reported revenue for most LPs. Canopy Growth reported net revenue of $123.4 million for its fiscal Q3, which represented sequential growth of 62%. The reason for the big gain from Q2 was that the company took a $32.7 million revenue adjustment for returns and pricing adjustments in the prior quarter, as the company clearly detailed in its press release and financials. In Q3, the adjustments were just $5.3 million. The company’s sequential growth, without those adjustments, would have been a still healthy 13%.

Pricing adjustments and returns hit the P&L of the LPs in a single quarter, but they correct for revenue that was recognized in prior quarters. In our view, investors should be careful to understand this point. For example, Aurora Cannabis reported revenue looked even weaker than it was due to pricing adjustments and returns that hit the P&L in its fiscal Q2 that amounted to 16% of the $66.6 million it would have reported absent that factor. The company reported a sequential decline in cannabis net revenue of 26%. Had it taken the hit in Q1 rather than Q2, then it would have reported 5% positive growth in cannabis net revenue.

We have seen several analysts apply valuation metrics to overall revenue, without taking into account some of the issues we have highlighted, in particular the non-cannabis revenue aspect. We suggest that investors should be cautious to avoid overvaluing companies that have substantial non-cannabis revenue or that are overly reliant upon the volatile wholesale channel. At the same time, we advocate being mindful with how one looks at growth when there are returns and pricing adjustments during the quarter or in prior quarters.

Access transparent banking services for cannabis-related businesses with Dama Financial, a sponsor of this week’s newsletter and a financial services business founded by banking and payments industry veterans that, as agent of its U.S.-based bank partners, provides solutions and services for cash-intensive businesses. 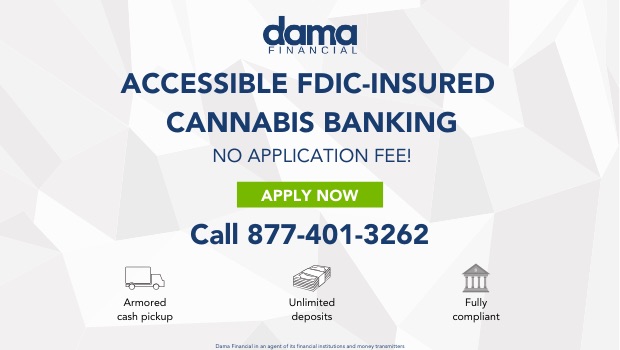 There is a safer, more convenient way to manage business transactions.
Schedule a free consultation now!