This is a copy of the March 3rd edition of our weekly Newsletter, which we have been publishing since October 2015.

Coming into its earnings report last Wednesday, MedMen was lagging most of its multi-state peers on the CSE quite substantially. The company had already pre-announced its fiscal Q2 revenues, so the big question was how much would the company lose during the quarter. The bad news was “a lot” ($61.8 million operating loss), but the good news was slightly less than in the prior quarter. The even better news was that the new CFO sounded like he has already moved to address the bloated cost structure and to better explain the financial model of the company.

After reviewing the financials and listening to the call, we expected a bit of a relief rally, but the stock sold off further, which we will explain below. Before addressing it, here is the MedMen performance compared to some of its peers since 10/31, with its 40% decline substantially worse than the others, most of which have rallied: 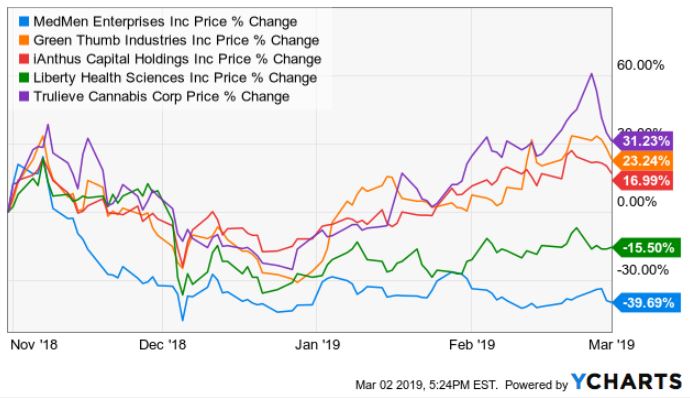 This year-to-date comparison includes a larger set of peers, which shows that MedMen has underperformed rather substantially all but one company: We think that the weakness following the report is likely due to the perceptions that the company will need to raise capital in relatively short-order. This will take place at a time when the company is facing three separate lawsuits and a pending merger with PharmaCann. The last capital raise was a disaster, with the company repricing the deal and raising less money than before the change.

For those counting MedMen out already, we remind investors that we have seen several other companies overcome challenges in recent years. One timely example that comes to mind is Organigram, the Canadian LP that endured a crisis after the presence of pesticide myclobutanil was detected in its cannabis a little over two years ago. Just this week, the company’s stock posted an all-time high, one of the few Canadian LPs to do so since October. Looking back at how the company not only survived the challenge but ultimately prospered, one of the key events was bringing in a new CEO. This may ultimately be part of the process of restoring investor confidence in MedMen, and CEO Adam Bierman seemed to acknowledge the possibility in his interview with Seth Adler at the NCIA CannaVest event last month.

MedMen has done an excellent job of establishing its brand and beginning to put in place its footprint, but its business model relies on its ability to raise capital. We have seen other cannabis companies in the past see significant pressure on their stock while raising capital, yet those companies went on to make all-time highs at multiples of the price of those painful capital raises within a year. iAnthus Capital, MPX Bioceutical (now MPX International after selling its U.S. assets to iAnthus) and Origin House offer other case studies. We think that MedMen has a broad and deep investor base that is likely to capitalize it, but we aren’t sure how much, if any, discount from these prices and this relatively low valuation will be needed to get it done. One thing is sure: This will be an important event to watch play out in the next few months.

For investors interested in the cannabis industry and for operators looking to tell their stories to potential investors, there is no better event than the Benzinga Cannabis Capital Conference. After highly successful events in Miami and Toronto in recent months, Benzinga returns to Toronto next month, and we are excited to partner with them again. For high quality companies interested in presenting, please email PatrickLane@Benzinga.com to learn about the many opportunities available.

Tickets are on sale, and our readers can save 20% off of Early Bird rates by using the code “NCV”. We look forward to seeing you there!