As we all prepare to wrap up 2019, a year that can’t end fast enough for many investors and operators in the cannabis industry, we want to share our thoughts about the year ahead, as we think we bottomed out this week and expect the year to end on a more positive note. We were a bit premature in both timing and price level when we suggested that the bottom was within 10% and within two weeks in early October, but we think that the tone did change this past week as we anticipated in our last newsletter. Indeed, the market rallied after making a new low on Monday, and it is positioned to possibly break a string of seven consecutive monthly declines as we end November this week. 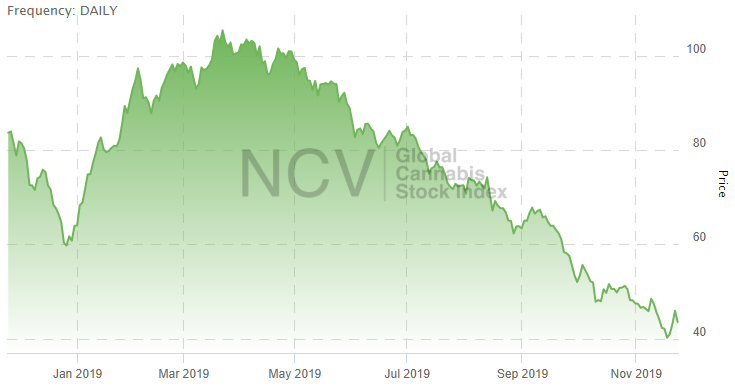 We predicted strong numbers from the biggest MSOs and a favorable response to them, and that, in our opinion, was one of the three factors that helped engender a massive rally off of multi-year lows in the Global Cannabis Stock Index, which remains down 8.4% this month and 32.1% this year despite the lift. Perhaps the historic favorable vote for the Marijuana Opportunity Reinvestment and Expungement Act of 2019 (MORE Act) played a role as well, but the more important factor, in our view, was the process of Aurora Cannabis shoring up its balance sheet by allowing holders of its convertible notes to convert to stock at a discount to the volume-weighted average price over two different periods. This painful process pressured its stock along with other Canadian LPs, but the market experienced what looks like a capitulation low on Tuesday morning ahead of an explosive rally over the balance of the week.

We expect that the bottom is in and that we can see a modest recovery over December and into the next year, which could be the first since 2017 to show positive returns for the sector. Driving our optimism are several factors. In Canada, we think that Cannabis 2.0, which will permit the introduction of new types of products like vape pens and edibles, will broaden the market. More importantly, it appears that Ontario will soon allow a substantially higher number of retail stores, making the market in the nation’s largest province more like the highly successful one in Alberta. Third, we think that Canopy Growth can regain investor confidence with a soon-to-be-announced CEO. After a year that was a letdown on many fronts, the valuations have plunged to levels that are justifiable in most cases as investors have become overly pessimistic.

Our optimism in the U.S is supported by several factors. First, the vaping crisis appears to have ended based on commentary we heard across the sector on calls this week. Another driver of improved sentiment should be the legalization in Michigan next week and Illinois on January 1st. Not only are these large states with a combined population of 22.7 million, they show the promise of future legalization given that they are the first in the Midwest. 2020 could be a big year for legalization, with Florida, Pennsylvania and New Jersey at the top of the list along with others that include Arizona and New York. While we don’t think federal legalization will happen anytime soon, we’re expecting late in the year federal policy could be a hot topic in the Presidential race. Depending on how the elections go, we could also see more optimism that Congress could tackle some of the big issues the industry faces.

There are some medical programs ramping quickly, like Pennsylvania’s, which will perhaps encourage other states to adopt new programs or improve existing ones. Like Canada, California has been disappointing, but there are signs that enforcement actions are picking up, and we are hopeful the legal market can begin to displace the larger illicit market there. Finally, the biggest driver, in our view, will be recognition that despite all of the adversity, a handful of MSOs are generating very large revenue that is profitable or on the cusp of profitability, something we think that eludes many investors. In fact, the three leading MSOs reported an average annualized revenue of $200 million in Q3, all with positive adjusted EBITDA, a stark contrast to the losses being generated by the leading LPs, which are now trailing them in revenue as well.

While we think investors will be pleased with the performance of publicly-traded stocks in the months ahead, we caution that the returns from Q1 of this year, in which the Global Cannabis Stock Index gained 57.4%, aren’t likely to occur. One factor to consider is that many of the companies have greatly expanded their floats over the past year, whether through founder  or early investor shares hitting the market or capital raises, something that will likely prevent some of the spikes we have seen during rallies. Also, the capital crunch that we have discussed is likely to stick around for a while, and this overhang will limit gains. From our perspective, even the companies with the very best balance sheets or cash balances will tap the market, as this recent inability to easily raise equity and the awareness of how much capital will be needed to build out, especially in the U.S., where many Canadian LPs aspire to be via hemp CBD initially but ultimately through THC, will likely lead to opportunistic capital raising. Finally, we caution that many companies will struggle to raise capital and will have to scale back their growth plans. This process will help the leaders, who will face less competition in certain markets, but it is something that could hold back several stocks.

Despite a challenging year for stock prices across the sector and for revenues and profitability in Canada, a lot of progress was made in the American cannabis industry, where several companies ramped up operations substantially and got at least close to profitability if not quite there. It’s important to remember that the dynamics in the U.S. have improved considerably. It was less than two years ago that Jeff Sessions rescinded the Cole Memo, leaving the industry uncertain about the future. The status quo is conducive for more growth, and the likelihood of quick legalization, which might introduce substantial competition as better capitalized and larger companies enter the industry, seems low. Things are good and getting better in the U.S., and we expect that the market will improve in Canada as well.

Happy Thanksgiving to all of our American readers!

A Message From This Week’s Newsletter Sponsor

Cannabis operators who are disappointed with extraction machines that deliver much less throughput than promised have every right to feel angry. It’s an expensive and all-too-common problem that can decimate ROI. 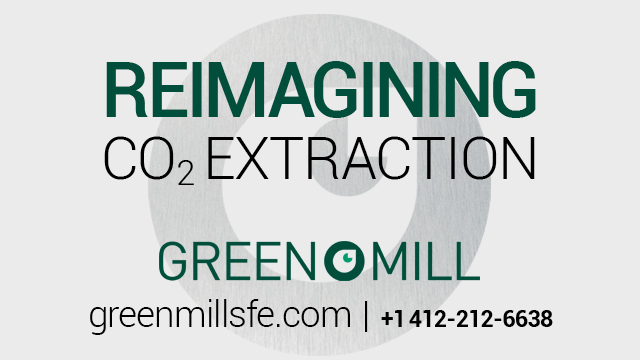 At Green Mill, the company stands behind the reliability and precision of their machines to ensure you get what you expect every time. They do this through patented technology that vastly increases extraction efficiencies, as well as through software-controlled system operation that nearly eliminates human error during an extraction cycle. The process is able to deliver validated performance that often exceeds advertised claims. To learn more, send an email to info@greenmillsfe.com, visit their website, or stop by Booth C5928 at MJBizCon in Vegas, where they’ll be unveiling some exciting new developments.