The most compressed earnings season our industry has seen to date kicks into high gear this week, with reports from the three largest MSOs in terms of revenue, Curaleaf, GTI and Trulieve, and from two leading Canadian LPs, Aurora Cannabis and Village Farms. Earnings season comes as the market’s correction has reached three months since the peak on February 10th. The stocks, which were up 108% year-to-date then, have fallen sharply, with the New Cannabis Ventures Global Cannabis Stock Index down 36% since then: 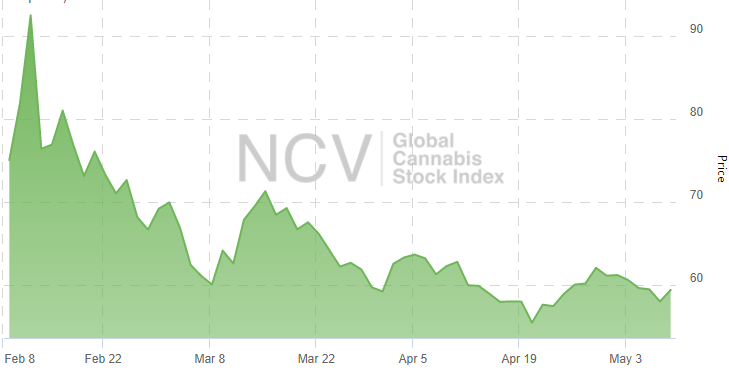 Most of the decline from the parabolic spike took place in first few weeks, with the stocks that ran up the most pulling back the most. Since March 8th, the index is down just 1%.  Looking at the returns of some of the largest stocks by market cap since then, it’s clear that the underlying dynamics have been very different for Canadian LPs, the four largest companies by market cap in the new Ancillary Cannabis Index and MSOs: 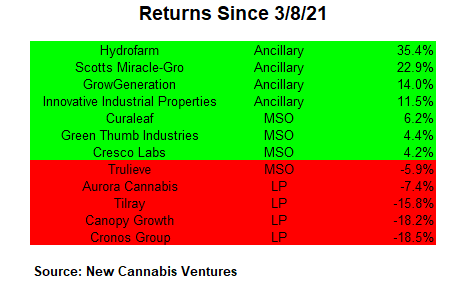 While this process has played out gradually, Monday’s trading offered a significant anomaly, as MSOs rallied sharply (after the Barron’s cover story), while the LPs sold off. We have been warning investors that the large Canadian LPs were going up for the wrong reasons. After the elections in November, we described how investors betting on legalization were “buying the wrong stocks.” Most recently, we discussed in February that the largest Canadian LPs, even with the sharp two-day pullback from the peak, were still up substantially more than the MSOs, and we suggested the American operators would likely fare better as investors began to understand that American legalization will be a drawn-out process. Since that newsletter on February 14th, the 4 largest LPs by market cap have declined by more than 32%, while the four largest MSOs have dropped by about 14%.

In our view, the weakness in the largest Canadian LPs has been weighing on other parts of the market. We are hopeful that this correction from extremely overbought levels for the Canadian LPs is nearing an end, and this week could help us learn if that is the case. We were encouraged to see Cronos Group rally in the face of a disappointing report on Friday, and it’s likely that Village Farms on Monday morning and Aurora Cannabis on Thursday afternoon could face similar tests this week. While it feels premature to call the bottom in the largest Canadian LPs, and perhaps we will need to wait until Canopy Growth reports its fiscal Q4 in early June, it does seem like it’s getting close.

One of the reasons that the MSOs have stabilized since early March is likely that the Q4 reports that followed were generally strong, highlighting their very favorable fundamentals. So, this week sets them up for an interesting test as well. We expect the reports to be positive, with the companies meeting or exceeding the consensus expectations, but what’s not clear is how they will react. We recall very strong reports last August for Q2, when the earnings reports followed strong runs in the stocks, leading to a 45-day consolidation. This time, though, the stocks have already been consolidating and enter earnings season just on top of long-term moving averages.

Hydrofarm has rallied sharply since it pre-announced its strong Q1, and Scott’s Miracle-Gro reacted very well to its fiscal Q2 report, with the company boosting its outlook based on the strength in its Hawthorne Gardening business. We are hopeful that the good news we expect from leading MSOs will be similarly well-received.

It was almost a year ago that we discussed the third wave of cannabis investing and our expectations for a sustainable bull market. The consolidation over the past three months has been the most substantial pullback since then. We think how the market reacts to the deluge of earnings reports this week could offer a clue about the timing of the next leg up. Be sure to stay tuned to our coverage of the most important earnings reports. 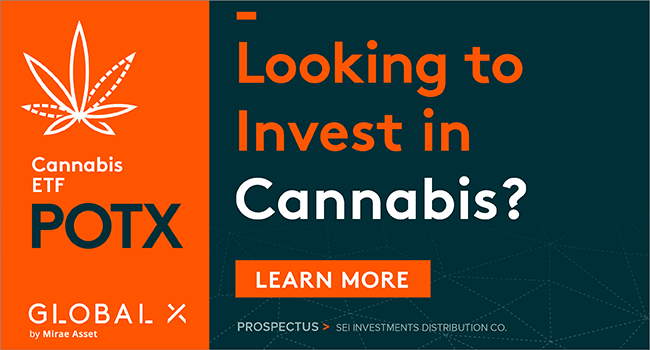 While federal prohibitions complicate the business landscape, it is still possible to invest legally in cannabis. The Global X Cannabis ETF (POTX) delivers exposure to a variety of publicly listed cannabis companies from around the world in a single trade. POTX is listed on Nasdaq and can be accessed from leading brokerage apps. Learn more.