The American Cannabis Operator Index moved higher for the third consecutive month in December, advancing 10.0% to 63.05: 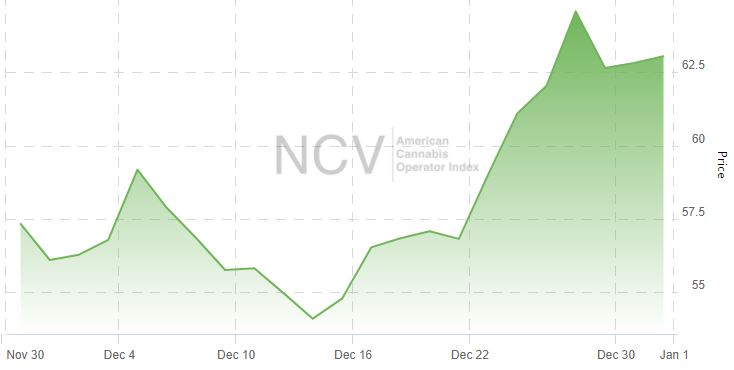 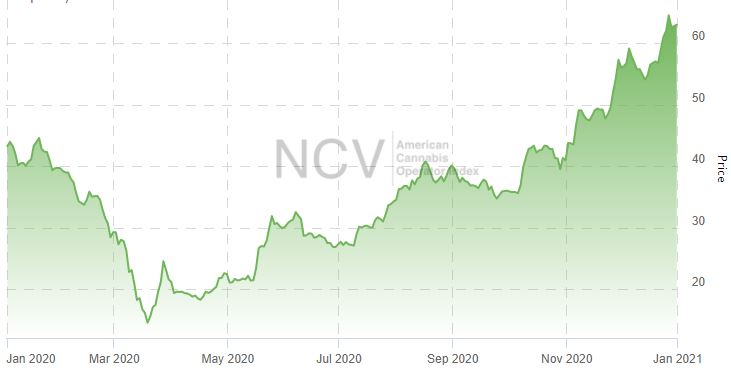 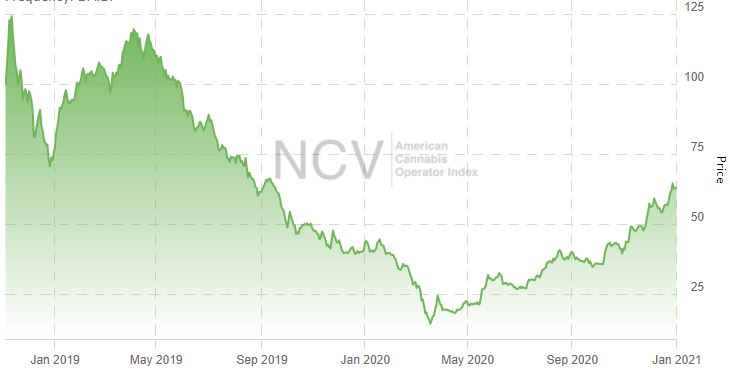 During December, the index included 20 companies, including 17 multi-state operators (MSOs) and 3 focused solely on CBD extracted from industrial hemp. Three companies posted returns in excess of 20%, while six declined during the month: 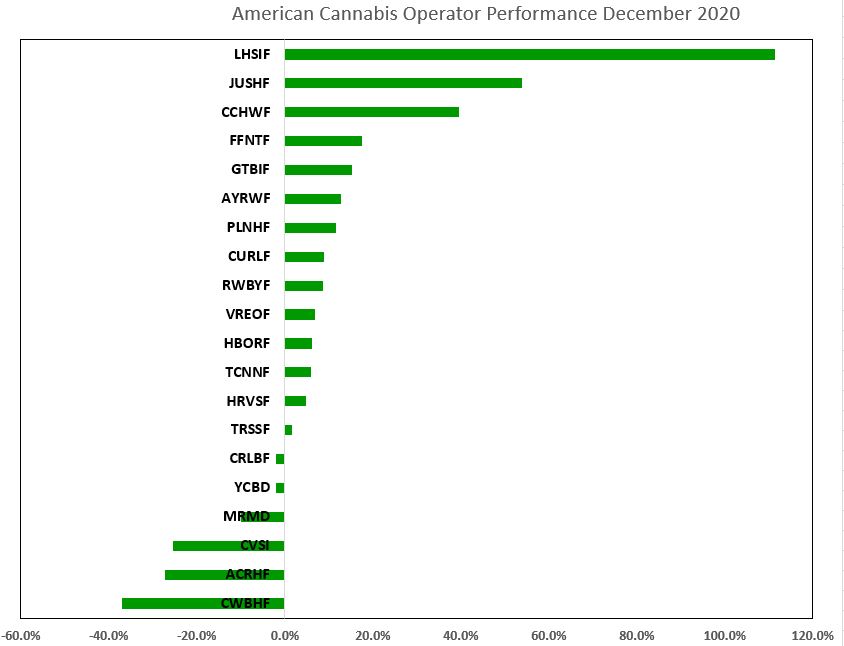 The four best performing stocks in December included Liberty Health Sciences (CSE: LHS) (OTC: LHSIF), Jushi Holdings (CSE: JUSH) (OTC: JUSHF), Columbia Care (CSE: CCHW) (NEO: CCHW) (OTC: CCHWF) and 4Front Holdings (CSE: FFNT) (OTC: FFNTF). Liberty, last month’s worst performer, announced that it will be acquired by Ayr Strategies (CSE: AYR.A) (OTC: AYRWF). The stock ended the year up 69.6%. Jushi Holdings opened its 3rd adult-use store in Illinois during December and completed the acquisition of the balance of ownership in its Virginia subsidiary. The company received $32 million from the exercise of warrants. The stock rallied 324.7% in 2020. Columbia Care, one of the weakest names in November, rallied after announcing the pending acquisition of private MSO Green Leaf Medical. Earlier in the month, it had closed on an acquisition that substantially increased its presence in California. For the year, its stock gained 143.0%. 4Front was able to pay off debt owed to Gotham Green after executing two sale-leaseback transactions. The stock rallied 102.2X% during the year.

The four worst performing stocks, all of which declined in 2020, included Charlotte’s Web (TSX: CWEB) (OTC: CWBHF), Acreage Holdings (CSE: ACRG.A) (OTC: ACRHF), CV Sciences (OTC: CVSI) and MariMed (OTC: MRMD). Charlotte’s Web, which was last month’s best performing stock, pulled back with other CBD names and ended the year down 57.0%. Acreage Holdings named a Pfizer veteran as its new CEO during the month. Its price is somewhat tied to Canopy Growth’s price given the plan of arrangement that would lead to their potential merger in the future, and Canopy Growth pulled back during December. CV Sciences was part of the weak CBD sub-sector. During the month, it announced that it has secured a common stock purchase agreement with an institutional investor to provide up to $10 million over time. Its stock declined 51.3% in 2020. Marimed, which joined the index during the month, had exploded higher in November, rising 260%. It ended the year down 23.9%.