44 companies currently qualify for inclusion, with 36 filing in U.S. dollars and 8 in the Canadian currency, which is the same as when we reported a few weeks ago. We added  Gage Growth (CSE: GAGE) (OTC: GAEGF), which reports in American dollars, and removed Auxly Cannabis (TSX: XLY) (OTC: CBWTF), which reports in Canadian dollars. Also, we have left Aphria in the Canadian section for now, but we will remove it when Tilray (NASDAQ: TLRY) reports in July. Additionally, we have left GW Pharma in the American dollar reporting section and will remove it or replace it with its acquirer, Jazz Pharmaceutical (NASDAQ: JAZZ), depending upon how they break out its financial performance. 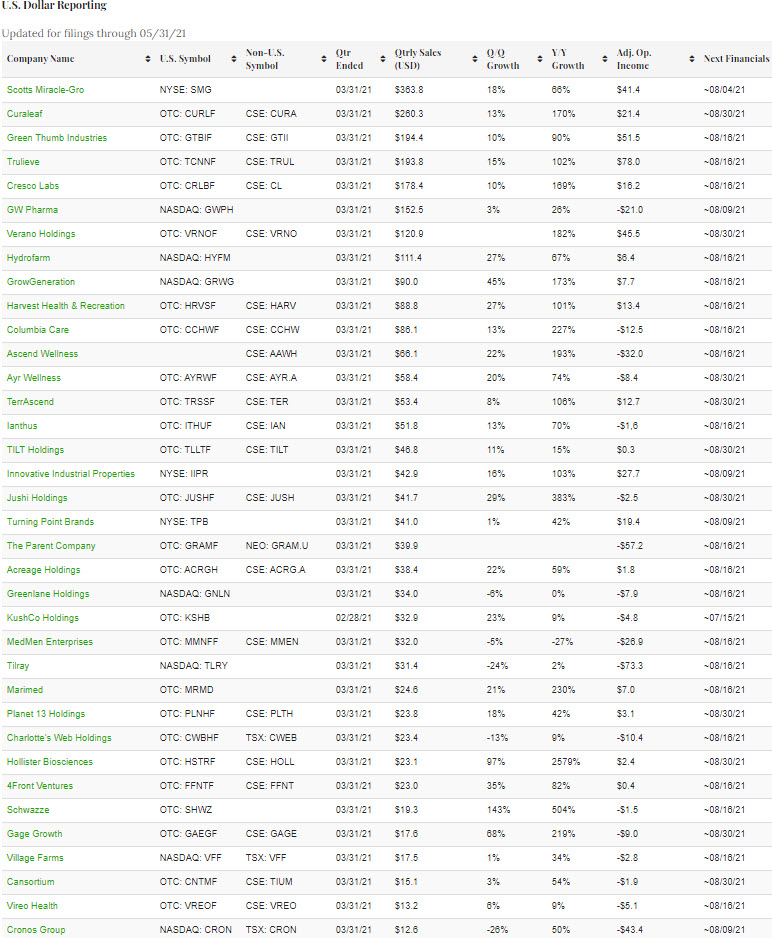 None of the companies currently on the list of leading revenue generators that report in American dollars are scheduled to report financials in June.

On June 1st, Canopy Growth (TSX: WEED) (NASDAQ: CGC) reported a slight decline in revenue sequentially as it narrowly missed analyst expectations for revenue, which had been expected to increase to C$155 million. The company’s adjusted EBITDA was considerably worse than the -C$64 million analysts had forecast at -C$94 million. The report rounded out several others during the month where Canadian LPs missed expectations.

For those interested in more information about companies reporting in June, we publish comprehensive earnings previews for subscribers at 420 Investor, including for Focus List member Fire & Flower.