Canadian cannabis stocks, as measured by the New Cannabis Ventures Canadian Cannabis LP Index are down 49.5% so far in 2022. The decline is less than the 55.3% loss in the Global Cannabis Stock Index, but it’s a lot less than the return of the Ancillary Cannabis Index at -64.2%. On the other hand, the index has dropped a lot more than the American Cannabis Operators Index, which is down 37.7%.

Looking at the companies that are primarily LPs and having market caps above C$400 million, we have a universe of just 5: Aurora Cannabis, Canopy Growth, Cronos Group, Organigram and Tilray. We own three of these in model portfolios at premium subscription service 420 Investor, where we are modestly overweight the sector relative to the index.

Looking at valuations on the five companies, some are trading at a discount or at tangible book value: 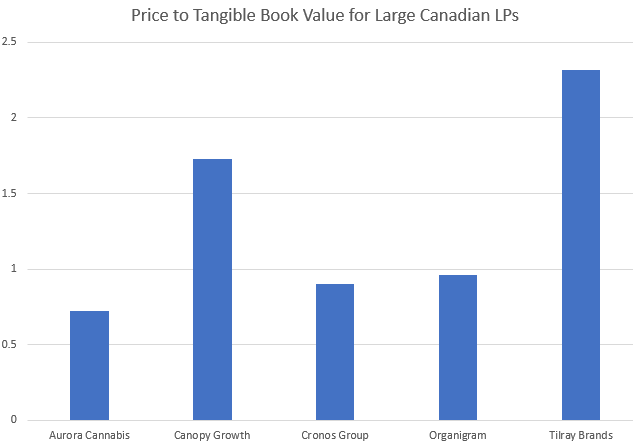 Even the two above 1X are low relative to their historical valuations.

We have pointed to the balance sheet issues for Canopy Growth and Tilray Brands in the past, and these remain of concern. The others, though, are a lot less risky on this front.

Aurora Cannabis sold stock in late May. This transaction fixed the balance sheet and left a gap in the trading from $2.65 down to $2.28. Aurora Cannabis is relatively strong in Europe, which could become a driver over time. The company has a C$589 million market cap, cash at about the value of its long-term debt (out-of-the-money convertible notes). In its fiscal Q3 ending in March, the company used $34 million in its operations and generated adjusted EBITDA of -C$12 million. Analysts project an EBITDA breakeven in FY23, and the stock trades about 2.5X the projected FY23 revenue. While we like Aurora’s stock here, we aren’t going to speak as highly as we did when Canopy Growth was in the mid-2s.

In early July, we wrote here that the stock “finally looks better to us.” It rallied substantially and now trades in the 3s after reaching as high as $4.30 in mid-August. We continue to believe that Constellation may buy the rest of Canopy Growth. Absent that potential driver though, we are concerned with the negative cash flow and remaining debt. The market cap, C$2.18 billion, is 4.5X the projected FY23 revenue and 3.9X the projected FY24 revenue. These ratios are even higher when including the debt with the market cap. In FY22, Canopy Growth had -C$415 million in adjusted EBITDA. It’s supposed to improve a lot in FY23 but is still projected to be -C$249 million. The company used C$546 million to fund its operations in FY22.

Cronos Group’s market cap looks high at US$1.14 billion, but the enterprise value is substantially lower due to cash of US$945 million. The projected 2023 revenue of $138 million leaves the enterprise value to sales ratio at just 1.4X. The company has been reducing its losses, but the analysts project adjusted EBITDA in 2023 will be -US$45 million. We expect that Altria could buy the rest of the company and also like their prospects in Israel and with biosynthetic cannabinoids. Altria’s acquisition would enable it to invest more capital like Cronos Group did with the stake in PharmaCann.

We view Organigram very favorably. The company has been expanding its market share consistently. The market cap of C$489 million is just 2.6X projected 2023 revenue, but this ignores that the company has substantial cash (C$127 million) and no debt. Subtracting the cash leaves an enterprise value to sales ratio of just 1.9X projected 2023 revenue. Unlike the other three companies, Organigram is profitable currently. Analysts projected that adjusted EBITDA will be C$16 million in FY23. Similar to Canopy Growth and Cronos, Organigram has a large investor that is underwater. British American Tobacco paid a lot more in early 2021 for 20% of the company, and they could acquire the rest.

Tilray is the most expensive of these names and pretty diversified. The majority of revenue comes not from cannabis but rather pharmaceutical distribution, alcohol and hemp food. The market cap of the company is US$1.8 billion, which is 2.6X projected revenue in 2023. It is also 23.5X projected adjusted EBITDA. EPS, while improving, are projected to be negative until 2026. The company has been publicly discussing its goals of doing a lot more revenue, but this guidance includes being able to buy U.S. cannabis companies, which isn’t possible yet. Positively, it could buy HEXO Corp. given its current investment.

Three of the five companies have outside investors that could buy them. Aurora Cannabis and Organigram aren’t counting on the U.S. to permit operations, while the others are. Canada has been a tough market, and international sales are a factor for each of these companies.

We think cannabis stocks in general are attractive currently. Historically, we have not had big exposure to the large Canadian LPs, but we are slightly overweight in Tier 1 and Tier 2 names relative to the Global Cannabis Stock Index currently.

This week’s newsletter is sponsored by delivery software company, Onfleet 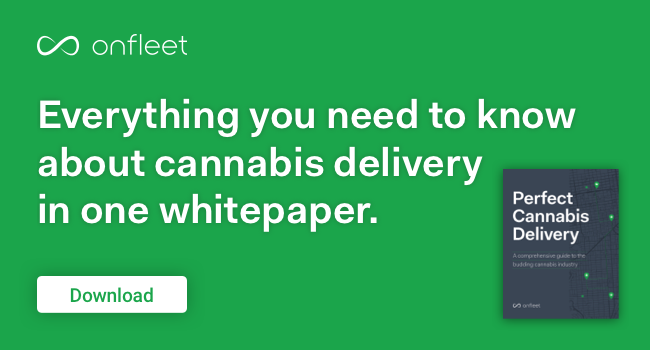 Cannabis businesses thrive on delivery. Ready to level up and offer home delivery of cannabis products? You need to read this white paper. Learn how to successfully navigate setting up cannabis delivery to meet your customers at their comfort level, right in their homes. These tips will set your business up for success as your business grows.

Although operations focused Body and Mind has built its business in limited license markets, management is now contemplating entering new ones. CEO Michael Mills and COO Trip Hoffman discuss how they plan to take advantage of the shift in consumer purchases from high-end to low-end cannabis products.

Pistil Data has been growing by leaps and bounds. In less than a year, it has expanded its footprint from two to 25 markets and has three products. The company launched in 2020 with an initial focus on cannabis sales teams and now reaches more than 150 clients across the U.S. In an exclusive interview, Pistil Data Co-Founder and CEO Jeffrey Graham discusses the company’s growing market reach and its plans to continue operating as a unique data tool for the cannabis industry.

After a slight uptick in July, the global cannabis market slipped slightly in August falling 1.3% to 15.20. The index is down 53.7% thus far in 2022. Stocks in Green Thumb Industries, Canopy Growth, Cresco Labs and Aurora Cannabis were strongest. The weakest were Leafly, Scotts Miracle-Gro, WM Technology and 22nd Century Group. New Cannabis Ventures maintains seven proprietary indices designed to help investors monitor the publicly-traded cannabis stocks, including the Global Cannabis Stock Index, as well as the Canadian Cannabis LP Index and its three sub-indices. Here’s a breakdown of the markets.

Illinois adult-use cannabis sales of $129.4 million decreased 4.6% sequentially in August. Compared to a year ago, growth was the same as the 6.2% rate in July.

Cansortium Q2 revenue was up 14% sequentially and 36% year-over-year to $22.4 million. The company reaffirmed its 2022 guidance of $90 million to $95 million. “The investments we have made to add scale and improve cultivation in Florida are paying dividends,” said CEO Robert Beasley. He said the company’s indoor cultivation facility in Sweetwater, Fla. is fully operational and the yields from its Tampa facility have doubled from the start of the year. As a result, Florida revenue increased 16% from Q1 without the addition of any new stores. “We remain on track to open 4-5 new stores in Florida by year-end, and the final phase of our cultivation expansion in Tampa is nearly complete,” Beasley added.

Jushi Q2 revenue increased 18% sequentially to $72.8 million and rose 52.4% year-over-year to $47.7 million. The company is expanding its cultivation capabilities and completed the first phase of construction of the cultivation portion of its grower-processor facilities in Pennsylvania and Virginia. The company also is revising its fourth quarter 2022 annualized revenue to be between $320 million to $350 million. “By the end of 2022, we expect to operate 37 retail locations and approximately 330,000 sq. ft. of cultivation and processing capabilities, including 100,000 sq. ft. of canopy,” said Founder, Chairman and CEO Jim Cacioppo.

NOXX, a Michigan-based cannabis company, has borrowed $15 million from Altmore Capital to pay for capital expenditures, as well as future acquisitions and expansion. In August, NOXX announced a partnership with Forty Acres Enterprises, with a goal of helping to nurture Black cannabis entrepreneurs, open new Black-owned cannabis companies and serve as an innovation incubator for Black involvement in cannabis across Michigan. The partnership’s first collaboration is a new cannabis dispensary now open in Grand Rapids. “Together with Altmore Capital, NOXX is poised to become a dominant force in reimagining how consumers shop for cannabis,” said CEO Tommy Nafso.