This is a copy of the April 15th, Sunday edition of our weekly Newsletter which we have been publishing since October, 2015.

Until this week, the most important event for the cannabis industry was likely the Cole Memo that the Obama Administration issued in 2013. At that time, it was unclear how the federal government would handle the implementation of legal cannabis for adults in Colorado and Washington, which had both seen voters approve ballot initiatives in 2012. The “hands-off” approach gave entrepreneurs and their investors a green light to proceed, and clearly the industry has flourished subsequently, with not only those states but also several others now regulating commercial cannabis. As we warned last year, though, the federal policy was only a guideline and not law, which many only appreciated better after Jeff Sessions ripped up the Cole Memo in early January.

A cloud of uncertainty has been hanging over our industry since the elections in late 2016, and, while we avoided a worst-case outcome with the recent extension of protections for medical cannabis during the budget process, investors and operators have been rightly concerned about the threat of push-back from the federal government. This week, though, we got a very clear signal that a more permanent policy could be put in place, as Senator Cory Gardner of Colorado was able to apparently get the President on board. Gardner, the sole Republican senator among the states with the most to lose, including his own state as well as California, Oregon and Washington, joins several other members of Congress who have championed our cause, and hopefully this agreement comes to fruition.

The federal government is not likely to be legalizing cannabis. Instead, this potential legislation will create clear guidelines that set regulation at the state level and address important issues like taxation, research, access by veterans and banking. It may take quite some time to be finalized, but we think that the potential for a shift in federal policy will trigger an immediate wave of capital formation as investors sense the likely erosion of risk, and we point to Canada as an example. While 2 1/2 years after Justin Trudeau won the nation still hasn’t finalized its program, with implementation expected in the late summer after a final vote in early June, investors have poured large amounts of capital into the industry. We see a wave of investment ahead now in the United States, as investors sense a better reward-to-risk ratio as federal policy becomes clearer.

Cannabis stocks jumped sharply on Friday, and we won’t be surprised to see this trend persist. In fact, we point to prices still substantially lower than in early January, when Sessions dumped ice water on the rally inspired by California legalizing. Beyond healthy equity markets, we expect private investors are going to be more open to backing cannabis and cannabis-related companies. We are already seeing more established companies like Acreage Holdings and Medmen eyeing the public markets, and we expect that a more robust public market will give investors in private companies more confidence that they have a potential exit strategy.

The bottom-line is that this week’s news, while certainly not yet final, is a potentially powerful catalyst that could allow our industry to accelerate its growth quite dramatically.

This newsletter is supported by our friends at Cannabiz Media, who tracks cannabis licenses. 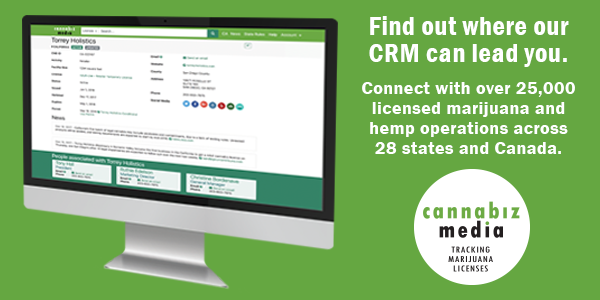 You can keep up with this rapid growth and with cannabis licenses across the U.S. and Canada using the same tool that provided all of the data for the Cannabis Licenses in California series – the Cannabiz Media License Database. It’s the most comprehensive and up-to-date source of information about the cannabis industry, currently tracking over 25,000 licenses. The database offers a full suite of features to help you operate, prospect, develop relationships, and analyze successfully in this evolving market.

Consider subscribing to 420 Investor, Alan’s comprehensive stock due diligence platform since 2013 for more in-depth information and market intelligence about the publicly traded cannabis sector, including insights into Canadian, American, German and Australian opportunities.