This is a copy of the April 28th edition of our weekly Newsletter, which we have been publishing since October 2015.

On Day 1 of the Benzinga Cannabis Capital Conference in Toronto earlier this month, Jon Najarian, who was moderating a late-afternoon panel that included the CEOs of several multi-state operators, broke some news that was stunning: “Canopy Growth is buying Acreage Holdings for $2 billion.” The next morning, the companies press released their deal, which wasn’t and couldn’t be what Najarian had described, as the price would have been too low and an acquisition would have cost Canopy Growth its TSX and NYSE listings. Instead, they entered into a complex agreement that could lead to their ultimate merger.

Najarian wasn’t the only one who was confused by the unusually complex transaction. CNBC said that Canopy Growth was “buying” Acreage Holdings: 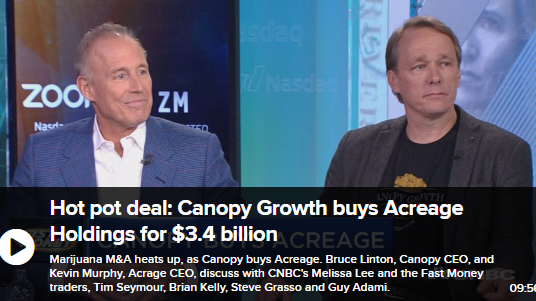 More than a week later, there is still a lot of confusion about not only the nature of the deal. Canopy Growth isn’t buying Acreage. Instead, subject to shareholder approvals at both companies, it will pay $2.55 per share to shareholders of Acreage Holdings in order to provide an incentive to them to enter into an eventual merger that will take place in the future once certain conditions are met. Many of the actual terms of the transaction haven’t been released, with only the press release in the public domain at this time. We think that the companies added to confusion by discussing full legalization as a triggering event that would allow the merger, when in fact it’s simply the ability of Canopy Growth to close without risking its exchange listings. This can happen without full legalization, though clearly full legalization in the United States would be sufficient as well. We also believe that many think that Canopy bought an option to acquire Acreage, but this is not accurate, as we believe that Canopy will be obligated to close the merger once the conditions have been met.

Another detail that seems to be overlooked by many in the media is that Acreage Holdings will be able to issue up to 58 million shares to raise capital or to effect mergers, and we think that this is one of the primary benefits for the company itself, which isn’t receiving the cash payment from Canopy Growth. We expect that potential acquisition candidates will have more confidence in the equity of Acreage given that it will be tethered to Canopy.

While over time we expect that Acreage will indeed be tethered to Canopy once the deal is approved by shareholders, that doesn’t appear to be the case at present. Since the close on 4/17, the day before the deal was announced, Acreage Holdings has lost 1% while Canopy Growth has increased over 16%: 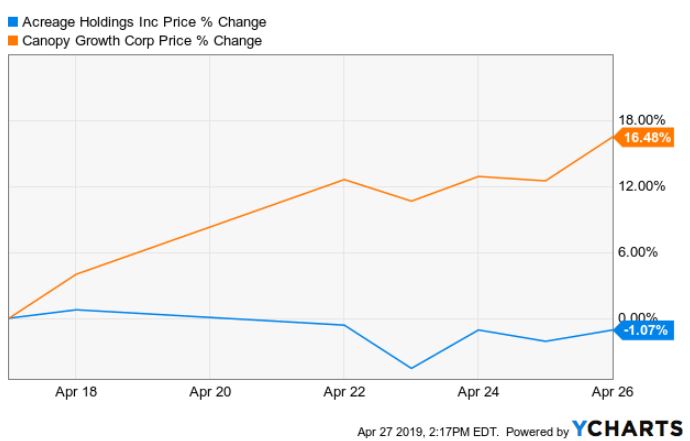 At the close on Friday, Acreage Holdings was trading at a 30% discount to the price implied by the transaction ($2.55 plus .5818 shares of Canopy Growth per share of Acreage Holdings). We think that the very wide spread is due to several factors. First, the deal hasn’t been approved by shareholders, and the Acreage vote will exclude the shares held by CEO and founder Kevin Murphy. Second, the open-ended nature of the ultimate closing makes it very difficult for anyone to arbitrage the spread by shorting Canopy Growth, which is very expensive to borrow. Additionally, many institutions that might want to sell or short Canopy Growth to buy Acreage Holdings aren’t able to do so. Another factor is that the company faces some unlocks of shares from a capital raise at a substantially lower price. Finally, we believe that the confusion over the terms of the deal and the lack of understanding about how Acreage Holdings will benefit from the arrangement are contributing to the very large discount.

We expect that over time Acreage Holdings will track Canopy Growth more closely, so this wide discount to the implied deal price may be an opportunity for longer-term investors as it narrows somewhat over time. The companies are well aware of confusion in the market due to the complexity of the deal, and they are likely to clarify the terms in the coming weeks and to better explain how this arrangement will benefit both companies once the initial transaction closes. We have an interview scheduled with Acreage CEO Kevin Murphy this week and expect to be able to provide more clarity to our readers.

After raising $15M since inception, cannabis brand 1906 is working to expand to additional states and complete development of more innovative products. 1906 combines the therapeutic effects of low-dose cannabis with the highly-targeted benefits of potent plant medicines. Using a patented lipid microencapsulation technology, 1906 products, which are currently in over 200 stores in Colorado, deliver an onset time of 20 minutes or less, with no cannabis flavor.

1906 has been recognized by mainstream media as “one of the most innovative new brands in the cannabis sector”. To learn more about the company which is a client of New Cannabis Ventures, visit the company’s page that we maintain on its behalf and click the green Get More Info button.