This is a copy of the October 21st edition of our weekly Newsletter, which we have been publishing since October 2015.

This has been a year of tremendous milestones for the cannabis industry, with GW Pharma having the first cannabis-derived pharmaceutical approved by the FDA in June and now Canada becoming the first major nation to legalize cannabis for adult consumers this past Wednesday. Multinational companies from a variety of outside industries are eyeing strategic investments in the industry as well, a new development that indicates the normalization of the industry.

We have long viewed Canadian legalization day as likely to disappoint, as we have pointed to supply constraints, limited distribution and a narrow set of approved products that would make the big day a bit underwhelming, and, indeed, that is how it seems to have played out. In fact, traders dumped Canadian LPs aggressively this week, but we want to point our readers to what the near future may look like in terms of very promising financials, as LPs are likely to report significant revenue from September and on beginning as soon as mid-November, reflecting initial sales into the provinces ahead of retail sales. The following table shows the consensus forecasts from analysts for several of the largest LPs (data source is Sentieo), with all in Canadian dollars except Tilray, which reports in USD:

Canopy Growth, Aphria and Aurora Cannabis are expected to roughly quintuple sales from year ago levels. Tilray apparently won’t be recognizing sales in Q3, as the company recently provided guidance of $10-10.5 million for Q3.

While the Canadian story will play out in the months and years ahead, we continue to suggest that investor focus is shifting to the United States. Canopy Growth’s purchase of the intellectual property of ebbu is a reminder that the U.S. remains a major source of innovation despite federal illegality. Further, legalization day wasn’t even over when two relatively new special purpose acquisition companies out of Canada announced major transactions, as detailed in the articles below. iAnthus and MPX Bioceutical executed the first proposed major combination of public cannabis operators in the U.S., a move that is in line with the major consolidation we expect in the months ahead.

So, while there may have been a “sell-the-news” move this week after Canada’s historical day, we see a lot of positives ahead for both the Canadian LPs as well as the U.S. operators. This week, Aurora Cannabis will begin trading on the NYSE, extending a trend of leading LPs adding major U.S. exchange listings, and we continue to expect a few more there, including Aphria. Despite the market’s muted reaction this week, tailwinds abound for the cannabis sector. 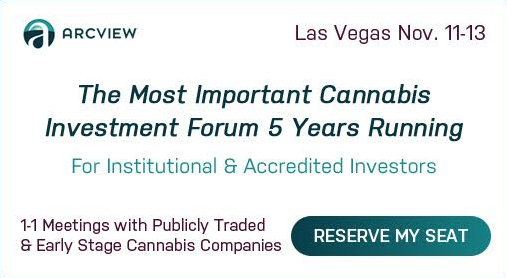 Join The Arcview Group in Las Vegas Nov. 11-13 for the most important cannabis investment event the last 5 years running! Take advantage of an intimate setting right before MJBizCon to meet the most prominent issuers and investors in the cannabis industry. Arcview Las Vegas is THE Forum for serious accredited, institutional, and family office cannabis investors. Listen to talks by industry leaders, hear company pitches and participate in 1-1 meetings with publicly traded and early-stage cannabis companies. Limited availability. Reserve your seat now!