Perhaps the biggest story of 2016 in the cannabis capital markets was the surge in prices and the amount of capital raised for the cannabis industry in Canada during the year. With two deals of $60mm each closed in December, the total amount raised by licensed producers (LPs) will exceed C$500mm (about $373mm at today’s exchange rate for the Canadian dollar). Most of the capital was raised in the second half of the year, with 84% of funds raised from deals announced after June following the April 20th proclamation by the Canadian government that it would be introducing legislation to legalize cannabis in the Spring of 2017: 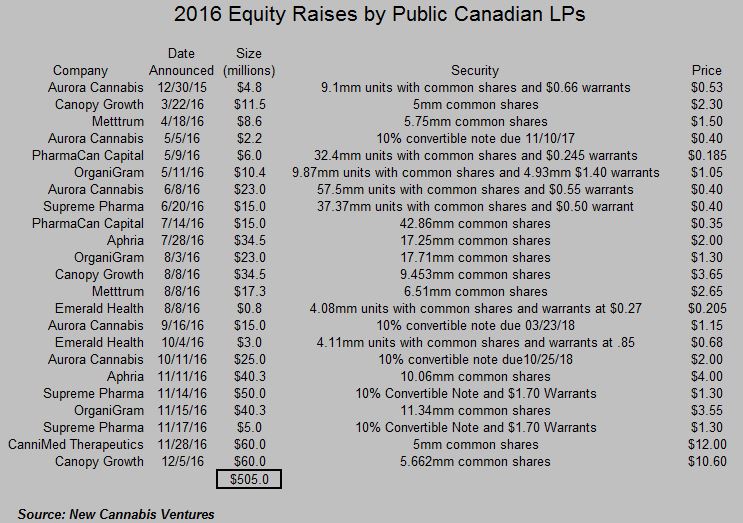 Beyond the amount of capital raised, it was particularly exciting to see the involvement of investment banks who underwrote many of these deals, earning commissions of 5-6% of the amount raised.

Health Canada, which oversees the industry, has issued a total of 37 licenses under its ACMPR medical cannabis program, and, at present, 18 are held exclusively by the 11 publicly-traded companies, but there are several of the remaining 19 that will be trading publicly soon. Plans to go public via RTO have been announced by Hydropothecary, MariCann, The Green Organic Dutchman and WeedMD. United Greeneries, which is already part of an Australian company, MMJ Phytotech, will be spun out into a Canadian company. Additionally, AB Labs has sold 1/3 of the company to Invictus MD Strategies.

We wrote very bullishly about the back half of the year we expected for Canada in June, where we shared “3 Reasons Cannabis Stock Investors Should Focus Now on Canada”, suggesting the pullback following the rally in April was a great entry and noting the improving environment for capital raising and the catalysts regarding legalization that would present themselves over the balance of the year. Indeed, the stocks performed exceptionally well since June 30th as reflected by the charts the 5 LPs with the highest amount of sales, with the average return of 239%: 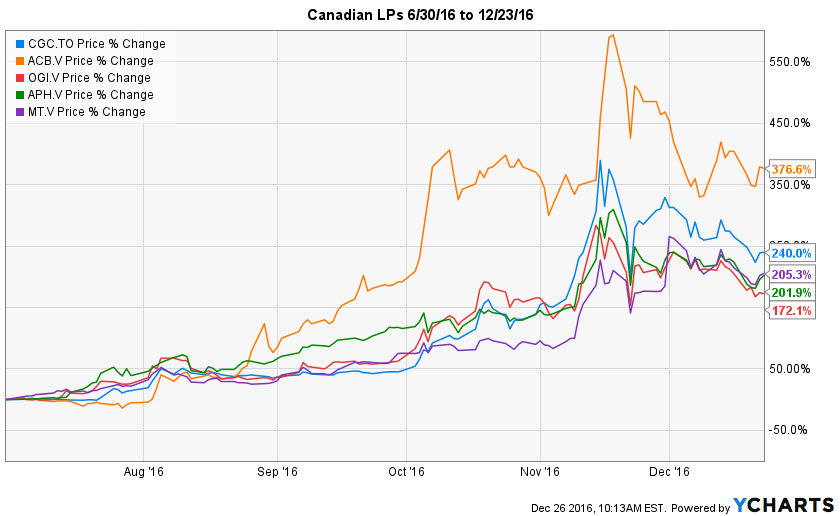 Canada is certainly not alone in attracting investor attention, as U.S. stocks have rallied this year as well. Most of these companies, though, are not involved in the cultivation, processing or sale of cannabis. Instead, the vast majority of U.S. publicly-traded cannabis companies are involved in the ancillary industry, providing goods and services to the industry. The best known and most actively-traded U.S. cannabis company directly involved in the industry is Terra Tech (OTC: TRTC). The company was already developing its Nevada licenses and expanding its IVXX brand in California when it announced in January the acquisition of Blum Oakland, dramatically changing the profile of the company as it added more than $12mm of annual revenue directly related to the sale of cannabis.

Beyond Terra Tech, there are a few options for investors who want to invest directly in the cannabis industry, including GrowBlox Sciences (OTC: GBLX), which is developing a cultivation facility in Nevada, and Kaya Holdings (KAYS), which operates in Oregon. Canadian-based Golden Leaf Holdings (CSE: GLH) (OTC: GLDFF) generates substantial revenue from its extracts business in Oregon. There are several other Canadian companies that are pursuing business in California, Nevada and Washington as well.

While the U.S. cannabis industry is growing rapidly, the opportunities for the public to invest remain extremely limited relative to the options to invest in Canada. The biggest impediment is federal illegality in the United States, which imposes many challenges on companies trying to build cannabis businesses. For example, a company that is licensed in Canada can sell to all Canadians (and even potentially export), while U.S. companies are not able to sell outside of the state in which they hold a license, a limitation on the ability to scale. Federal illegality increases the risks for all cannabis businesses in terms of asset forfeitures and even criminal prosecution, though federal spending bills that limit the DEA and relaxed federal enforcement of the Controlled Substances Act for those that comply with the Cole Memorandum from 2013 have reduced that risk in the near-term. With the change in the Presidency and the pending end to the Rohrabacher-Farr medical marijuana amendment in April, the risks of operating cannabis businesses could increase dramatically in 2017, and publicly-traded companies might serve as a target for the federal government. Unless there is reform to federal laws, there are three significant obstacles that will challenge U.S. cannabis operators and sap investor demand, including taxation, inability to borrow and difficulty selling equity.

We have published a great deal on Internal Revenue Code Section 280E, which limits the expenses that can be deducted by cannabis businesses to only items that are included in “cost of goods”. The consequence is that marginal federal tax rates can dramatically exceed the top corporate marginal tax-rate of 39% and can even lead to taxes being owed when the company reports a loss. Jordan Sinclair, Director of Communications at Canopy Growth in Canada said “When generating taxable income, we’ll pay corporate tax at 26.5% combined federal and provincial tax rate.” Carl Merton, CFO of Aphria, suggests the potential to reduce federal taxes slightly with a Manufacturing and Processing deduction.

The financials of Terra Tech depict the tremendous unfairness of the 280E tax treatment. The 10-Q for the quarter ending 9/30 shows that the company generated a big federal tax liability despite running a large net loss:

The financials of Golden Leaf Holdings are similar, with the company incurring federal taxes of almost $700K in the first three quarters of the year despite reporting a large loss. Kaya Holdings, interestingly, doesn’t appear to be paying 280E.

LPs in Canada have been able to secure mortgages at very low rates. Some examples include:

The recent IPO of Innovative Industrial Properties (NYSE: IIPR), the first publicly-traded cannabis-focused REIT and the first cannabis-related company to list on the NYSE, where it joins Scotts Miracle-Gro (NYSE: SMG), which has acquired several cannabis-related businesses over the past two years, demonstrates how onerous the terms are for financing property.  Its first tenant, PharmaCann, sold its New York facility to the company and leased it back with an implied IRR in excess of 17%. With bankruptcy laws not protecting federally illegal assets, like cannabis production facilities, and with no assurance that facilities can be relicensed to other operators, it’s not surprising that the borrowing costs for mortgages, which can be as high as 25%, are so expensive.

Borrowing on an unsecured basis is difficult as well. The U.S. publicly-traded companies, whether directly involved in the production, processing or sale of cannabis or serving in an ancillary role,  have struggled to raise capital. For example, Terra Tech reported a $5mm financing this month in the form of a convertible note that is secured by its assets. The note will bear interest at 12% and is convertible at $0.27 per share or 85% of the lowest volume-weighted average price (VWAP) in the 15 days prior to notice of conversion. As onerous as this appears, the financing is actually attractive relative to other borrowings in the sector.

The Canadian investment banks, including companies like Canaccord Genuity, Clarus Securities, Dundee Capital, GMP Securities, Mackie Research Capital and PI Financial, have participated in raising primary capital for the Canadian LPs, booking commissions of 5-6%. They have also begun to publish research on the LPs, which encourages more institutional participation. In the U.S., Cowen and Company published a big industry report earlier this year and even initiated coverage on Kush Bottles (OTC: KSHB), but it hasn’t yet provided any underwriting of securities. In fact, somewhat ironically, Canopy Growth has engaged Cowen and Company for investment banking services.

To its credit, Terra Tech has been successful with an S-3 registration that has allowed it to use investment bank Dominion Capital to offer up to $20mm in stock through an Investment Agreement. The lack of underwriting or research coverage in the U.S. for the cannabis companies shuts out institutional investors. The Innovative Industrial Properties IPO, which was decreased in size rather dramatically from the original plan, as the company sold just 3.35mm shares after planning to sell 8.75mm shares, was a big disappointment that illustrated a lack of investment banking support, as the lead underwriter was not able to get a large syndicate or to bring in any major investment banks.

There is no doubt that the cannabis industry is evolving in the U.S., but federal illegality makes operating and raising capital very difficult for both private and public companies. In stark contrast, Canada, with its federal medical cannabis program and likely full legalization in the next two years, has a more business-friendly environment for cannabis operators. The stocks of Canadian LPs performed very well in 2016 as investors began to better appreciate the potential of the industry, with more than $500mm raised.

Direct cannabis companies in the U.S. will likely continue to struggle to raise capital due to the current legal environment absent any major changes. How the new Trump Administration plans to deal with the enforcement of the Controlled Substances Act is a major wildcard at this point, as it has yet to publicly address the topic. Hopefully President Trump will take note of the developments in Canada and take action to create rational policy that the majority of the country endorses, especially with respect to companies focused on medical cannabis. Until then, investors in cannabis operations should take into account the environment that favors Canadian companies.